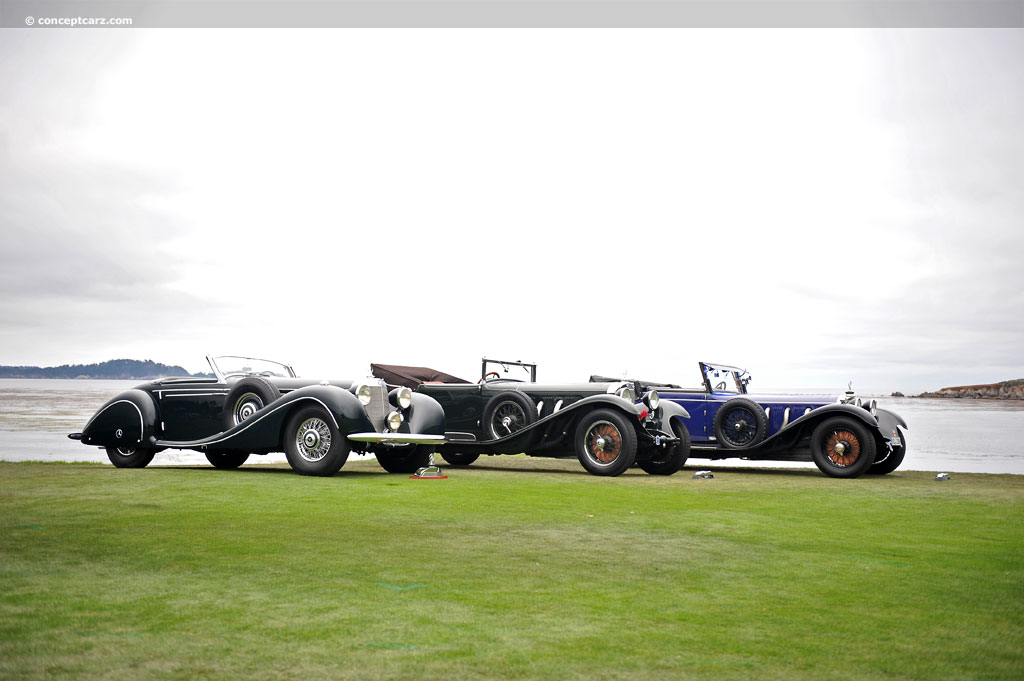 Ferdinand Porsche designed the S-Type for Mercedes-Benz in 1927. The racer was constructed using pre-existing road version Mercedes vehicles, mainly the 400 and 630 models. The names of these vehicles came from their displacement size in liters. For example, the 400 had a four-liter engine while the 630 had a 6.3-liter engine, both were equipped a supercharger and six-cylinders. The engine was one of the most appealing attributes of these vehicles. The drawbacks that robbed the vehicles of performance were its size, weight, and basic suspension system. A cushy suspension and large size were ideal for luxury vehicles that carried the elite in society, but at the track, the vehicles were in need of more performance characteristics. An attempt was made to enhance the sporty nature of the 630 by shortening the wheelbase, which brought about the 'short' (Kurz) version. This drastically improved the vehicle's sporty appeal but more was needed to enhance the handling. Mercedes answer to this problem was the S-Type version which saw the chassis lowered and the engine moved back. This improved the vehicle's balance. To improve its performance, the engine capacity was enlarged to 6.8 liters. Thus, the 680 S was born.

The Nurburgring 1000 km race debuted in 1927. The track is challenging with it 172 turns and 25.6 km length. The track tests both the driver and the vehicle in all scenarios such as power, braking, and cornering. At the first Nurburgring race, it was the 680 S that emerged victoriously, a true testament to the vehicle's capabilities.

Future versions of the S-Type followed such as the 700 and 710 SS which saw horsepower ratings in the 225 range. Most were considered road-going cars but there was little to distinguish a car that was meant for the track and one that was meant for the road. Obviously, the vehicles fitted with luxurious coachwork never saw any track time but the roadsters, speedsters, and coupes (for example) could be used for dual purposes.
By Daniel Vaughan | Sep 2007• S Class: the epitome of automobile comfort
• Every generation of vehicles provides ground-breaking solutions to the expectations of customers with regard to comfort

The history of the Mercedes Benz S Class shows that automobile comfort is far more than just a luxurious ambiance, size and performance. In fact it is far more the intelligent support of the driver and passengers through innovative technical solutions providing answers to current questions and requirements which contribute to the holistic comfort of a vehicle. Added to that is the highest quality of material, design and production. The sum of these factors provides for a perfect mobile location.

The Mercedes Benz S Class and its predecessor model series have always stood for precisely this to a particularly high degree. Even the Mercedes Simplex 60 hp from 1903 documents this high standard of comfort. Emil Jellinek, successful businessman and father of the Mercedes brand's eponym had a long-distance saloon mounted on the chassis of the new top model of the Stuttgart brand for his own personal use. The comfort of the vehicle is not only reflected in the engine output of 60 hp (44 kW) which at the time was a superior achievement, but also in the spacious passenger compartment in which the occupants sat on comfortable seats upholstered with the very finest brocade.

The S Class' complete ancestral line begins after the Second World War. Initially it was the two Mercedes Benz models 220 (W 187) and 300 (W 186), both presented in 1951, that again set standards with regard to comfort in the luxury segment. At the same time the S Class continued the tradition of luxurious vehicles from the Mercedes Benz brand and its predecessor brands. This continuity illustrates how well the engineers of each period have recognised and fulfilled the comfort requirements of customers.

But what is it exactly that makes an automobile particularly comfortable? As important the feeling of comfort is to the driver and passengers, it is still difficult to measure and express in an absolute, measurable value.

An examination of the definition of comfort
The human perception of comfort is made up of various factors such as a feeling of safety, good driving characteristics, sufficient performance, a high degree of ergonomics, and an impression of excellent quality. Furthermore, reduced fatigue, the interior climate, and clarity with regard to the operation of increasingly complex vehicle systems influence the perception of comfort. Ride comfort, that is the harmony between the moving automobile and the road, is a particularly strong constant in Mercedes Benz vehicles.

The 220 (W 187) and 300 (W 186) models, presented in 1951, were praised in contemporary driving tests for their extremely comfortable driving characteristics. In the generations of the S Class that followed, the engineers continued to increase this high level of comfort with the introduction of new innovations: for example the single-joint swing axle in the 220 'Ponton' model (W 180) with self-supporting chassis-body structure, presented in 1954, offered a previously unknown degree of driving comfort and at the same time increased driving safety. Furthermore, the so-called subframe which carries the engine and front wheels was decoupled from the body by generously designed rubber bushes which further reduced vibration in the vehicle interior.

In the years that followed, innovations such as air suspension (incorporated in the 'fintail' model series W 112 as from 1963), a hydropneumatic suspension with a self-levelling system (in the 450 SEL 6.9 of the W 116 as from 1975), the Adaptive Damping System ADS (W/V 140) and Active Body Control (standard in the S 600 of the W/V 220 model series) contributed to a higher standard of driving comfort. Many of the solutions first premiered as standard or special equipment in the S Class before finding their way into the other vehicle segments.

The automobile: the driver's partner
Driving comfort also means that the automobile plays a partner-like assisting role for the driver. The relevant functions range from automatic transmission to modern support systems as inherent elements of the integrated safety provided by Mercedes Benz.

From this perspective, the evolution phases of the S Class include for example the hydraulic automatic 'Hydrak' clutch (W 180, as from 1957), the electronically controlled five-speed automatic transmission (W/V 140, as from 1995) and the 7G-TRONIC seven-speed automatic transmission with an electronic control system and the DIRECT SELECT steering wheel gearshift (W/V 221, as from 2005).
Cruise control has been available as an option since its introduction in 1975 in the S Class of the W 116 model series. In 1995, PARKTRONIC, the electronic parking aid, and the Auto Pilot System (APS) for navigation premiered in the W/V 140 model series followed by LINGUATRONIC, the voice-operated control system in 1996. COMAND, the control and display system with a dynamic navigation system and KEYLESS-GO an access and drive authorisation system without keys were launched in the W/V 220 model series in 1998.

New interfaces
The S Class of the W/V 221 model series with systems such as the further-developed adaptive cruise control DISTRONIC PLUS which brakes the vehicle to a standstill in critical situations illustrates how innovative technology is increasing the importance of the car in its role as a partner for the driver. The SPLITVIEW display (as from 2009) offers a new optical interface for the interactive services provided by COMAND Online, which simultaneously displays different contents on the screen for the driver and passengers. As a result, the driver can use the navigation system whilst the front passenger uses the Internet.

Daimler AG regularly shows the future of comfortable vehicle operation in visionary research vehicles whose functions are often launched in standard production together with the S Class. In 2011, for example, the F 125! fascinated with the '@yourCOMAND' telematics system which is controlled by gestures and voice.

Climate and ergonomics
Personal wellbeing is an emotion which particularly contributes to the perception of comfort. That is why engineers have always worked at improving the standard of climate and ergonomics in every generation of the S Class. As a result the Mercedes Benz models in the luxury segment offered a heating system with a blower as early as 1951 – which at the time was far from being the rule. This comfort equipment was even standard in the 300 model – the 'Adenauer-Mercedes' (W 186) – and was available as an option for the smaller 220 (W 187) model. In the 220 (W 180) 'Ponton' model with self-supporting chassis-body structure presented in 1954 it was possible to individually regulate the driver's and front passenger's heating. As of 1958 customers who purchased the 300 (W 189) model could order an air conditioning system – then known as a 'cooling system' if required. By the time, the new generation of S Class was launched in 1991 (W/V 140), technology had further developed and included automatic climate control with an activated charcoal filter and CO/NOX-sensitive sensors. Finally in 1998, the W/V 220 model series offered multi-zone automatic climate control with individual control at each seat depending on the sun's position as well as luxury seats with ventilation and dynamic multicontour backrest – as an optional extra.

A high degree of ergonomics is a further key to comfort. Here, the Mercedes Benz models in the high-end and luxury segment began to set priorities with intelligent interior design at a very early stage – for example with the self-supporting chassis-body structure of the Mercedes Benz 220 'Ponton' (W 180) from 1954 and a version with a longer wheelbase, first implemented in 1963 in the 'fintail' Mercedes 300 SE from the W 112 model series. Innovations ranging from the electrically adjustable steering column in the W/V 126 model series (as from 1985) to the dynamic multicontour front seats with extended massage function in the W/V 221 (as from 2005) mark the path of development as the car is adapted to perfectly match the driver's requirements.

Travelling with the greatest degree of comfort – that is the leitmotif throughout the history of the S Class since the very beginnings of this extraordinary family of models from Mercedes Benz. And the technically excellent future of the S Class continues to build on this legacy with new innovations.

Designed by Ferdinand Porsche and built from 1927 to 1928, the Mercedes-Benz S was proclaimed the 'Last Word in Motorcar Design.' With a low chassis and an engine of 6.8-liters, it was the ultimate supercar of its era, driven by Barney Oldfield and H....[continue reading]

This car debuted on the Erdmann & Rossi stand at the International Automobile Exhibition in Berlin in 1928 and was then delivered to New York and sold to a Dr. Gustav Tieck. The 4-seater body is the only known Erdmann & Rossi cabriolet coachwork on a....[continue reading] 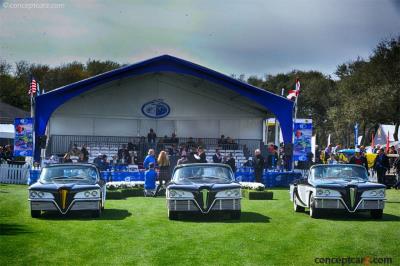 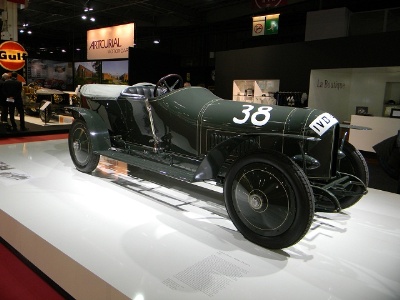 In the early 1900s, at the dawn of the automotive motorsport age, one of the most significant race venues was the Prinz Heinrich Tour, named after Prince Albert Wilhelm Heinrich of Prussia, automotive enthusiast and brother of German Emperor Wilhelm...

The 1955 24 Hours of Le Mans would end up being the darkest day in all of motorsport when Pierre Levegh launched off the back of Lance Macklins Austin-Healey and crashed into a barrier sending large portions of the car flying through the air acting...
© 1998-2021. All rights reserved. The material may not be published, broadcast, rewritten, or redistributed.