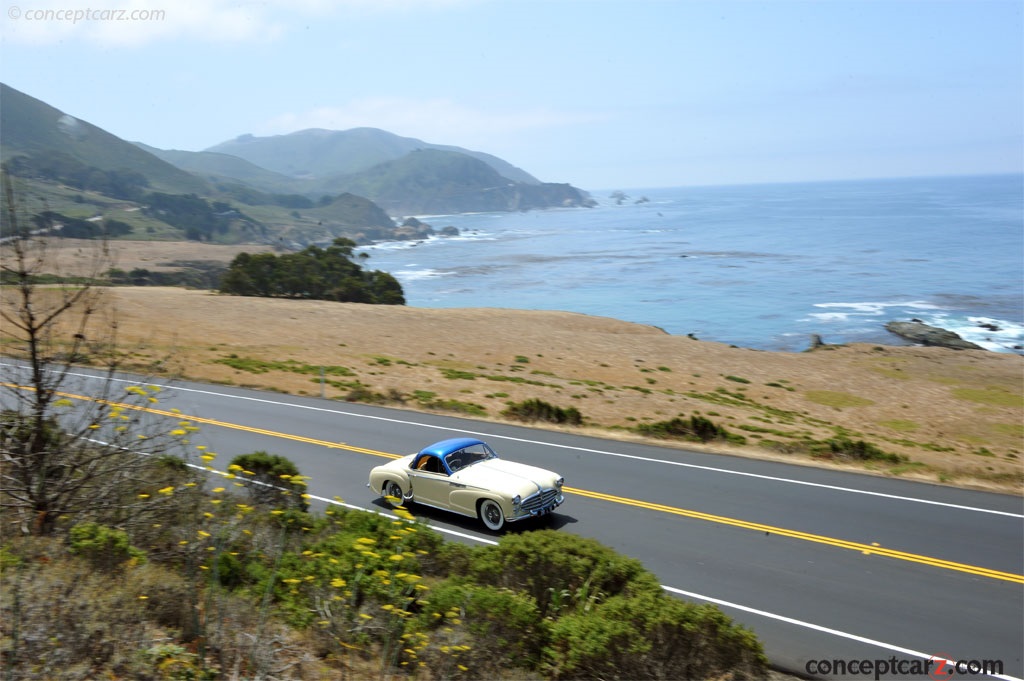 A luxury automobile built by French manufacturer Delahaye, one of the oldest names in automobile history, dating back to 1894, the 235 was produced from 1951 until 1954. Introduced at the Paris Auto Salon in 1951 the 235 was an effort by the company to update the pre-war 135 model for the 1950s. Sales had plummeted for Delahaye and even combined, the production of the Types 135 and 175 only amounted to 77 units sold for the 1951 model year. The company needed some revitalization and they hoped that 235 would do it.

Fernand Lacour was the man responsible for the mechanics of the 235 while the new modern 'ponton-style' bodywork with the full width front was created at the hands of chief designer Philippe Charbonneaux. Motto in Italy created a total of 84 prototype bodies. Made of traditional construction, the body was made of steel and aluminum. Sold only in chassis form in the beginning, the 235 receiving bodywork from a variety of coachbuilders including the famous Henri Chapron, Figoni, Antem, Saoutchik and various others.

Delahaye contacted the master craftsman Henri Chapron in the spring of 1951 to prepare him for the arrival of a new chassis. Chapron immediately set to work so he could be ready for the next Paris Salon. Unfortunately numerous delays held him back from his normal creative flow and the result was a model derived heavily from previous year cabriolets on the 135 chassis. Though the 235 kept a very classic look, it featured a very stunning look with characteristic bulges surrounding the wheel wells and the oval grille.
After introducing his 235 Cabriolet, Chapron next began preparation on a closed version. The base of the Cabriolet was mimicked including the bulges at the front and rear wheel wells, but the roof was completely new. The closed version would be considered a 'two-door hardtop' and differs from a coupe since there is a window behind the door, but no B-pillar.

The Delahaye Company never used their own facilities at the rue de Banquier in Paris, but in an attempt to fix dwindling sales in 1953 standardized 'factory' bodywork from Chapron was used. This saved the Delahaye Company nearly 30 percent on the modified coach-built versions.

The 235M used the popular 3.6-liter inline six from the 135MS with three downdraught Solex carbs and 152 hp at 4,200 rpm. The 235 featured an overhead valve, in-line six cylinder engine that produced 160 horsepower and could accelerate from 0-60 mph in just 11.5 seconds. The 235 was the replacement for the bigger Type 175, while the lesser 135M was still offered until 1954. The 235 had a top speed around 106 mph. Unfortunately the brakes and the fuel consumption were commonly criticized, as the heavy bodywork made by the French coachbuilders wasn't as technologically savvy in comparison to competitive models.

The 235 broke the record from Le Cap to Algiers in Africa in 1952. With a top speed of roughly 113 mph, the 235 had a six-cylinder 3.5-liter engine with a Cotal electromagnetic gearbox.

Though Delahaye had high hopes for the 235, the reliance on old-fashioned 1930 technology held them, despite the contemporary and sophisticated appearance of the model. The 235 was incredibly expensive with a Chapron-bodied 235 priced twice as much as the much faster Jaguar XK120 and five times the price of a Citroën 15CV 'Big Six'. The sluggish economy and the high tax rate on big-engined cars in post-war France all combined in an unfortunate end for the Delahaye Company. The French army chose license built Hotchkiss Jeeps instead of the Delahaye VLR 'Jeep' and Hotchkiss took the reigns of the Delahaye Company in June 1954. Not long after the Delahaye cars reached the end of their lifespan. In 1954 the 235s appeared one final time at the Paris Salon to sell the remaining stock.

The origins of the postwar Delahaye 235 can be traced directly back to the legendary 135 MS Competition of the prewar era. The Type 135 was followed by the 175 and 180 models, and finally by the Type 235, which would be the final car offered by the ....[continue reading]

The Delahaye 235 was the company's last car, following the pre-war 135 MS. It had traditional construction with bodies formed from steel and aluminum. They design and coachwork were created by some of the most famous coachbuilders of the era, includi....[continue reading]

This 1952 Delahaye 235 MS Cabriolet with coachwork by Henri Chapron was on display at the 2006 Pebble Beach Concours d'Elegance where Delahaye was the featured marque. There were 85 examples of the 235 constructed, including all body types, one prot....[continue reading]