The TZ2 were simplistic cars that were beautiful and very capable GT cars. This example has had a wonderful racing career in the hands of Belgian Count Rudy van der Straten's team VDS. It was driven by Teddy Pilette and Serge Trosch in the 1967 Nurburgring 1000 km and Reims 1000 km where it emerged victorious in its class. In modern times, it is still successfully campaigned in many historic races. It was offered for sale at the 2005 Bonham's auction at the Quail Lodge where it was estimated to fetch around $2.0 million dollars. At the conclusion of the auction, the bidding had failed to meet the reserve and the vehicle was left unsold. It is seen here at the 2006 Pebble Beach Concours d'Elegance.
By Daniel Vaughan | May 2007
Ing. Carlo Chiti was in charge of Autodelta during the creation of the Alfa Romeo TZ2 project. His resume included being former Chief Engineer at Ferrari. It is understandable that the inspiration and passion of the Ferrari 250 GTO bled into this project. The TZ2 (Tubolare Zagato) was constructed as a works car and there were no intentions of providing any examples to privateers. They were intended to challenge the GT category. In total, there were, at most, fourteen constructed. The chassis was from the original TZ, consisting of steel-tubed space-frame construction. Improvements were made to the original unit, with the TZ2 having lower suspension mounts and being more adjustable. The prototype car was given an all-alloy bodyshell designed by Ercole Spada for Zagato. The subsequent cars were molded from this and built with glassfibre. The total height of the vehicle was just a mere 41-inches. The aerodynamic design defied wind while maintaining an elegant stance.Under the bonnet lay an Alfa Romeo dual overhead camshaft four-cylinder engine displacing 1570cc. The engines were tuned by Virgilio Conrero's Torino shop, Autotecnica Conrero. They were given larger valves, magnesium casings, upgraded camshafts, two side-draught Weber carburetors, dry-sump lubrication, and a twin-plug head. These improvements brought the horsepower to 170 and a top speed in the neighborhood of 160 mph.
The cars made their debut at the 1965 Geneva Salon and production lasted until mid-1967. Some of the TZ2's were upgraded TZ's. Coachwork was handled mostly by Zagato. Chassis number 114, created in 1966, was done by Pininfarina. Another example, chassis 101, was done by Bertone. Bertone's example was done to test the feasibility of creating a road-going version. It was built atop a tubular steel space-frame and given Campagnolo, 13-inch forged magnesium wheels. The body was very curvy. At the front were covered headlights and a wrap-around windshield. The body was constructed mostly from aluminum. The engine was from an Alfa Romeo TZ, producing 130 horsepower in standard guise.
The Bertone example made its debut at the 1964 Paris Salon. There was much interest in the car, but Alfa Romeo decided to abandon the idea. A journalist later damaged the car while doing a test drive. Most everything was able to be salvaged. The racing debut of the Alfa Romeo TZ2 was at the 1965 24 Hours of LeMans. There were three TZ2 models entered, and all three failed to finish the race. This would be their only outing for the season. In 1966, they re-appeared, and in very strong fashion. In each of the 1.6-liter GT races they entered, they emerged victorious. Even with this new-found racing success of the TZ2, the program was dropped and efforts were reverted to the GTA and Tipo 33 program. Most of the TZ2 cars were later sold to privateers.
By Daniel Vaughan | May 2007 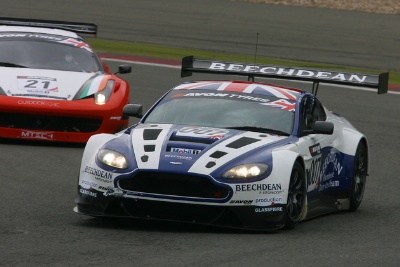 Nurburg, 21 May 2012 – The new-for-2012 Aston Martin V12 Vantage GT3 celebrated its first competitive win this weekend (18-20 May), when Beechdean Motorsport snatched the landmark victory at the Nurburgring in the second round of the Avon Tyres... 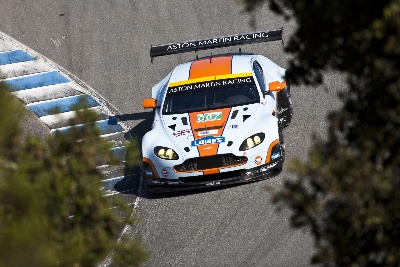 Having started from pole position, Aston Martin Racing led the fiercely competitive GT category at Laguna Seca, California, until the first refuelling stops. Competing on the third round of the American Le Mans Series (ALMS), the teams #007 Vantage...

The 1955 24 Hours of Le Mans would end up being the darkest day in all of motorsport when Pierre Levegh launched off the back of Lance Macklins Austin-Healey and crashed into a barrier sending large portions of the car flying through the air acting...