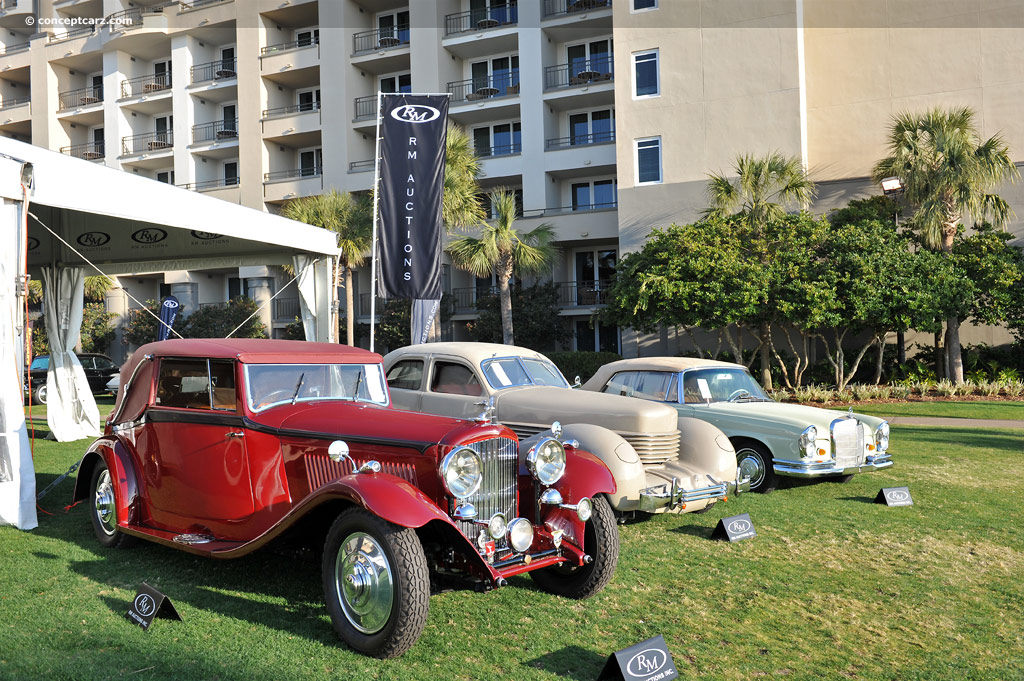 Bentley Motors was acquired by Rolls-Royce in 1931 and the first of the 'Derby Bentleys' appeared at Ascot in August of 1933. The chassis of the 3½-Litre model was derived from an experimental supercharged 2.75-litre Rolls-Royce (codenamed Peregrine) that never saw the light of day. To limit re-tooling costs, they were based on the contemporary Rolls-Royce 20/25hp with a slightly shorter wheelbase and a tuned 115 horsepower twin-SU carburetor version of the former's overhead-valve six. It had an all-synchromesh four-speed gearbox, semi-elliptic springs all-round, and servo-assisted drum brakes. The car's effortless sports car performance in almost absolute silence earned it the nickname, 'The Silent Sports Car.'

The Derby Bentley was an exclusively coach-built automobile and was nearly always fitted with owner-driver saloon or drophead coupé coachwork, the 'standard' designs being the work of Park Ward. Of the 2,442 examples manufactured (including the subsequent 4¼-Litre model) almost 50-percent were originally bodied by Park Ward.

Production of the 3.5-liter models continued into 1937 by which time 1,191 examples had been produced. The last year's allocation was manufactured alongside the incoming 4.25-litre (4257cc) version that would ultimately supersede the 3.5-litre cars.
by Daniel Vaughan | May 2019

In 1931 Bentley Motor was purchased by Rolls-Royce. As a result the Bentley factory was moved to Derby. Many of the future designs of the Bentleys utilized the Rolls-Royce creations and borrowed many of their mechanical components. The first example of this was in 1933 with the introduced of the Bentley 3 12 Liter which was very similar to the newly introduced Rolls Royce 2025. To continue Bentleys....
Continue Reading >>

Rolls-Royce acquisition of Bentley Motors in 1931 ensured the survival of the Bentley name, and in August 1933 a new Bentley model was announced, the 3.5-Litre 'Derby.' This Vanden Plas-bodied Derby was ordered in 1934 by racing driver and true gentl....[continue reading]

This vehicle began life much differently than it appears in modern times. It was given a sedan body by F. W. Plaxton of Scarborough. Scarborough is a well-known seaside resort, founded in 1919, and still in existence today. This car's body was lat....[continue reading]

The design of chassis number B35BL, a three-position Drophead coupe, was selected by its first owner, the Earl of Feversham. The coachbuilder, Thrupp and Maberly, delivered ten similar bodies at a cost of $10,000 each - over ten times the cost of a C....[continue reading]

The early ownership of this 3.5-liter Drophead Coupe was in the care of Captain Percival Kent, a pilot who had served with the British army during World War I and later joined the Royal Flying Corps. ....[continue reading]

Rolls-Royce used their 20/25 HP model as the template for the new 3.5-Litre Bentley. The Bentley was given a higher-compression engine fitted with a cross-flow cylinder head and Bentley's SU carburetors. The new Bentley was introduced at Ascot in Aug....[continue reading]

This Bentley was ordered in early 1934 by Hon. Miss Dorothy Paget of Buckinghamshire but soon relinquished her order. In 1934, another individual from Cheshire, Mr. Thomas Ayrton Stuttard (a successful textiles businessman) took delivery in April of ....[continue reading]

The Derby-built Bentley 3.5-Litre was the first new Bentley to be built following the company's acquisition by Rolls-Royce in 1931. Based on the experimental Rolls-Royce named 'Peregrine,' the 3.5-liter engine was developed from the same unit fitted ....[continue reading]

Three year after Bentley (famous for its large, luxury sports cars) was acquired by Rolls-Royce in 1931, Alexander Walker commissioned a 1934 3.5-liter automobile, with the body to be built by the U.K.'s best coachwork, Mulliner & Company. Sir Alexan....[continue reading]