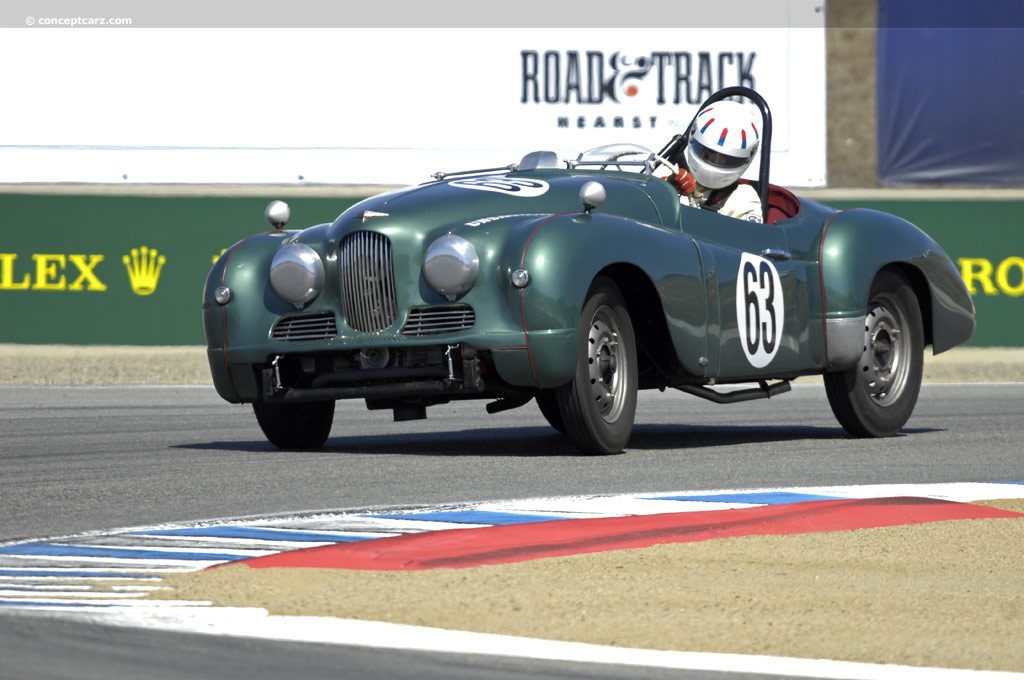 One of the rarest sports cars to reach North America was the British Jowett Jupiter. Its heritage went back to 1906 when Benjamin and William Jowett of Bradford, Yorkshire, expanded from bicycle repair into automobile building. They built their first prototype car that year, but commercial production didn't begin until 1910. The first Jowetts had flat, twin-cylinder engines, and this horizontally opposed layout would become a Jowett trademark. In 1936 a flat four engine was introduced.
Produced by Jowett Cars Ltd. of Bradford, England, the Jupiter was a British Automobile that was produced from 1950 to 1954. Jowett produced commercial and light vehicles from 1906 until 1954. Riding high on their success from the Jowett Javelin, the Jowett Company chose to test the waters by using its power train in a sports car, the only one the company ever made. ERA was chosen to design the chassis, and was done so by Professor Eberan von Eberhorst, from Auto Union. Eberhorst created a chassis design that consisted of tubular steel fabrication, with the suspension using torsion bars front and rear and independent at the front. Jowett modified this by building a steel and aluminum open body on this frame with a bench seat with room for three passengers. The hood was rear hinged and opened complete with the wings, while there was no external access to the trunk.More impressive than the Javelin, the Jupiter a more highly tuned flat four overhead valve engine of 1486 cc. With a maximum speed of 85 mph and a 0-50 time of 11.7 seconds, the Jupiter came with its compression ratio raised from 7.2:1 to 8.0:1 developing 60 bhp at 4500 rpm. Besides a four speed gearbox with column change, the Jupiter also featured two Zenith carburetors. All Jupiter sports cars were powered by the same Jowerr-designed 1486cc flat four pushrod engine of 60-62 bhp in standard form.
In 1950 the Jupiter achieved a record-breaking class win at Le Mans and became an instant success. Adding to this status was the outright win of the '51 Lisbon International Rally, a class 1-2 in the '51 Monte Carlo International Rally, and a class 1-2 at Dundrod in September of 1951. The Jupiter was again class-won in both 1951 and 1952 at Le Mans, along with various other lesser events throughout the year. During its production life and beyond, the Jowett Jupiter reached high successes in both national and international competitions. Unfortunately in 1953 the competition was getting heavier, as newer faster cars were giving the Jupiter a run for its money.
Late during 1952, a new model with a bit more power (63 bhp) was introduced, the Mk 1a. The aluminum-bodied MK 1a showcased an opening lid to a trunk with a lot more storage room. Only 94 Mk 1A's were constructed by the factory, and a total of 731 Mk1 were built. In addition to these vehicles, Jowett also produced 75 fully equipped rolling chassis that were supplied to external coachbuilders. These specialist coachbuilders included Ghia Suisse, Abbot of Farnham, Richard Mead, Farina and Gebruder Beutler.While only example of the R1, a sports- racing derivative of the Jupiter, survives today, 3 examples were designed. The R1 won the 1500cc sports car race held at Watkins Glen in 1951. One year later another R1 model placed 13th overall in the Le Mans 24 hour race. The R4 was the intended successor for the Jupiter unfortunately the Jowett Company shut its doors before every reaching production. Constructed with a fiberglass body and featuring a newer lighter chassis, the R4 had high hopes of being a 100 mph vehicle. The cheapest 100 mph car exhibited at the 1953 London Motor Show, the R4 Jupiter turned many heads. Two out of three prototypes have survived to this day.Before it could ever be raced by the Works, the factory closed. .By Jessica Donaldson