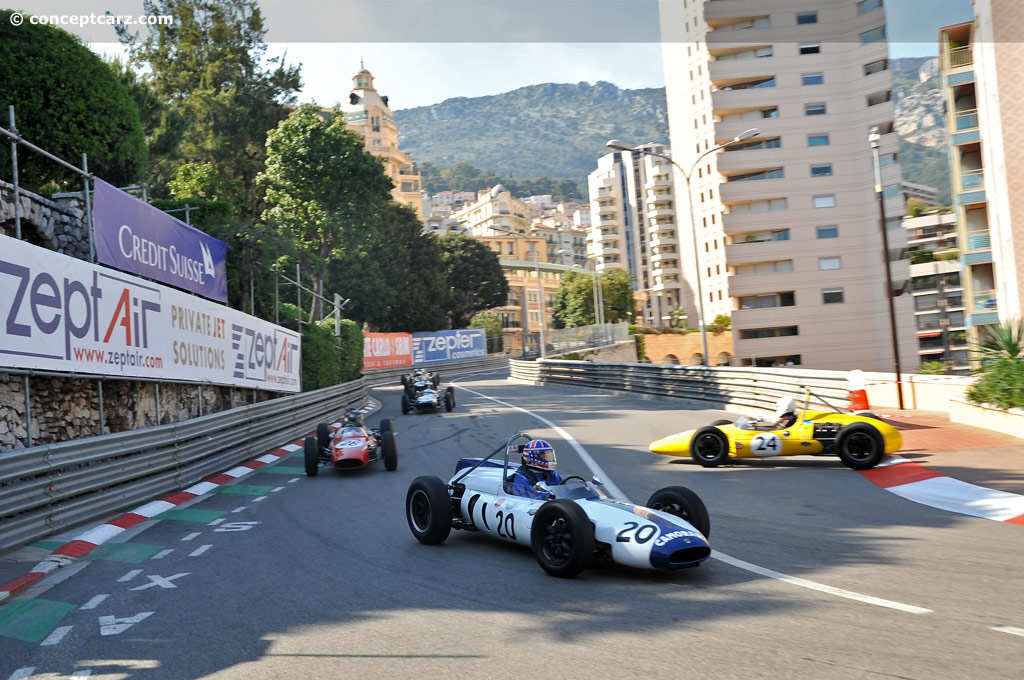 During the very early 1950s, Cooper had built a reputation by dominating the Formula 3 class. This had been a profitable venture and the company had wanted to diversify by moving into the Formula 2 class. Their customers had been asking for a Formula 2 car in which they could continue to climb the racing class ladder. Thus, the creation of the Formula 2 Cooper T20 MKI's. The car had proved capable, but more was required to become a serious contender. Hawthorn joined with Maranello in 1953, competing in F1 competition under the Ferrari banner. His career would continue for several years, mostly at the wheel for Ferrari's and Maserati's.

The Cooper T20 was produced beginning in 1952 and was powered by a L6 Bristol engine. The Bristol engine had been chosen because it was viewed as the best available 2-liter unit at the time. The manufacturer, Bristol Aeroplane Company based the six-cylinder engine's design on the pre-war BMW 328. The engine displaced 1971cc with hover-head valves actuated by cross-pushrods. In standard guise it produced nearly 130 horsepower, which was about 40 horsepower less than the competition.

The engine was lacking in power in comparison to its competition. Cooper chose to continue with the engine due to its availability, reliability, and parts were in abundance. To compensate for its lack of power, Cooper devised an uncomplicated and lightweight chassis. The resulting car was the Cooper T20, also known as the Cooper-Bristol Mark I (MKI). A prototype was debuted to the public at Hollyfield Road in early 1952.

The 1953 World Championship season had run under Formula 2 regulations. At the close of the season, the regulations changed to 2.5-liters in natural aspirated. Cooper decided to focus on Formula 3, unveiling the newest contender, the Mark VIII 500 in October. The 'curved-tube' concept was unveiled to the public where its streamlined body was hailed as the sleekest Cooper to-date.

For the 1957 season, the CSI tried to breath new life into Formula 2 by introducing a new internationally recognized 1500cc naturally-aspirated class. The British Racing Drivers' Club reacted quickly to this new potential by forming a race for this class, making it apart of their British GP meeting at Silverstone.

British based Cooper saw an opportunity to create a customer car that would comply with these new regulations. A Climax FWB single-cam powerplant was chosen, with plans for a twin-cam version forthcoming. Cooper began by modifying their tried-and-true Coooper Bobtail to accommodate the FWB engine, a single occupant, and open-wheel racing. The water-cooled four-cylinder engine was mounted in the rear, with the fuel tank situated around the driver's legs. The total fuel capacity was around 12-gallons. The battery was in front of the fuel tank and behind the front-mounted radiator.

A four-speed Citroen-ERSA gearbox was mounted to the engine and powered the rear wheels. The wheels were cast-magnesium and sat inches away from the finned drum brakes. Disc brakes were to appear later, on the production cars. The suspension was comprised of transverse-leaf springs. The body was created from lightweight aluminum. The completed car, sharing a similar design to the Mark X 500s, weighed less than 700 pounds.

The inaugural outing for the prototype car, dubbed the T41 F2 Mark I, was at Silverstone where Roy Salvadori easily qualified on pole. The Lotus 11 provided some competition during the race, but not enough to keep the Cooper from capturing the victory. Jack Brabham would later take over the duties of driving the prototype car. His first race in the car resulted in a third place finish.

Customer orders began coming in for the capable F2 car. Rob Walker was the first to place an order and was given a loaner car to race while he waited. A few more Mark I cars followed before the T43 Mark II's were built during the close of 1956. Thought they followed much of the design of the T41, there were differences such as a later wheelbase and a slightly restyled exterior shell. The twin-cam Climax FPF dry-sump engine now rested in the place of the since-cam unit. The four-cylinder unit displaced 1475cc, had five main-bearing crankshaft, twin-choke SU DU6 carburetors, and produced just over 140 horsepower.

The Cooper T43 was in competition from 1957 through 1960. During that time it would be outfitted with Bristol, Climax, and OSCA engines. It was the first Cooper car to score a World Championship win. Sir Stirling Moss was driving Robert Walker's T43 at Buenos Aires in 1958, when the victory was gained. The victory was historic, but with only ten cars on the grid, the race was not as competitive as some other GP events.

Roy Salvadori drove the Cooper T43 car at Aintree, Nurburginr, and Pescara during the 1957 season. His best finish was at Aintree where he managed a fifth place finish after starting 14th on the grid.

For the 1958 season, the T45 Mark III was introduced. The biggest change was the front coil springs and wishbone setup which replaced the transverse leaf unit. Another improvement was with the engines positioning, which was lowered a couple of inches in the engine bay. This allowed better access to the overall gear ratios which now could be changed in a matter of minutes.

One of the major highlight for the T45's racing career came at the 1958 Monaco race where it was driven by Maurice Trintignant to a victory, capturing a victory for the Rob Walker Racing Team and for Cooper, and becoming the first rear-engined car to win a major European race. This victory, coupled with Moss's accomplishment at Buenos Aires, introduced new potential for the 'engine in the wrong place/cart before the horse' setup. There were advantages to the mid engine layout; with the engine in the rear there was no need for a driveshaft to run under the drivers seat. This allowed the driver to sit lower to the ground, increasing the center of gravity, and improving the handling. The frontal area was reduced, since it did not have to be as large. Cornering was improved, aerodynamics were better, and performance was optimal. This, plus a smaller car with fewer components meant less weight.

In 1959, Brabham, along with the Cooper factory team, would become the first to win the Formula One World Championship in a rear-engined car. By 1960, many Formula 1 teams would follow Coopers lead by switching to mid-engined layout. One of the first to do so was BRM.

Jack Brabham, Stirling Moss, and Bruce McLaren each scored victories in 1959 with their Cooper cars. Brabham won at Monaco and the British GP. Moss had qualified on the pole at Monaco, but was forced to retire due to gearbox problems, leaving the spot open for Brabham. Gearbox issues would plague the cars throughout the season. Stirling Moss won the Portuguese and Italian GP. Bruce McLaren won the United States Grand Prix at Sebring. He gained another record that day, crowned as the youngest Grand Prix winner to ever win a race. At the tender age of twenty-two, that record still persists to this day. Brabham would be crowned with the seasons Drivers' Title, partly due to better reliability, and Cooper with the Constructors' Title.

In 1960, Brabham brought one of the Championship-winning Cooper T53 'Lowline' cars to the Indianapolis Motor Speedway for testing. The car was mocked by the other teams, but it ran as high as third, though it finished in ninth place. Within a few years, the Indy cars were being powered by engines that sat behind the driver. 1965 was the first year a rear-engined car took the Indy 500 checkered flag. It was a Lotus driven by Jim Clark; since that time every car that has achieved victory at Indy has been powered by a rear-engined vehicle.

Cooper and Lotus convinced Coventry Climax to create a 2.5-liter engine which could be used to contest the 1959 season. The engines had humble beginnings, being derived from a fire-pump engine. In a short four months, the engine had been created and made its inaugural racing debut in the back of a Walker Cooper car. The Climax engine was lightweight, yet powerful.

By now, the latest Cooper cars were being introduced, the T51 Mark IV cars which were to run in Formula 1 and Formula 2 competition. Power was from the 2.5-liter Climax FWA engine and the nestled comfortably in the curved tube frame. The frame was created by curved tubes; nearly every tue making up the frame had a curve. This was another interesting part of the car, as curved tubes generally has less rigidity as a straight one. However, the ingenuity and talents of Owen Maddock had allowed for the design to be possible, with each tube positioned to increase the strength of the frame.

Coopers impressive season for 1959, with eight victories out of the 13 F1 races, had them excited for the 1960 season.

The next iteration was the T53, which had coil springs instead of the leaf springs of the T51. The bodywork was improved which gave the car better aerodynamics. The T53 was a solid performer, providing Brabham with five consecutive wins by mid-season.

the mid-engined layout revolutionized F1, with most marque's adapting the style for the 1960 and 1961 season. Ferrari was one of the last to change.

1960 was the final year for the 2.5-liter regulations. Cooper and Brabham claimed their second World Championship. Except for a victory by Stirling Moss in a Lotus at Monaco, and a Phil Hill victory at Monza in a Ferrari, all races were won by Cooper. The British had boycotted the Italian race at Monza since the circuit was using banked turns.
By Daniel Vaughan | Jun 2007 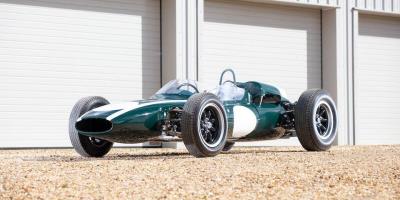 Ex-Formula 1 Car to be Sold in Bonhams Revival Sale to Raise Funds for Race Against Dementia Founded by Sir Jackie Stewart An ultra-rare and historic Cooper Climax T55, one of only two built...