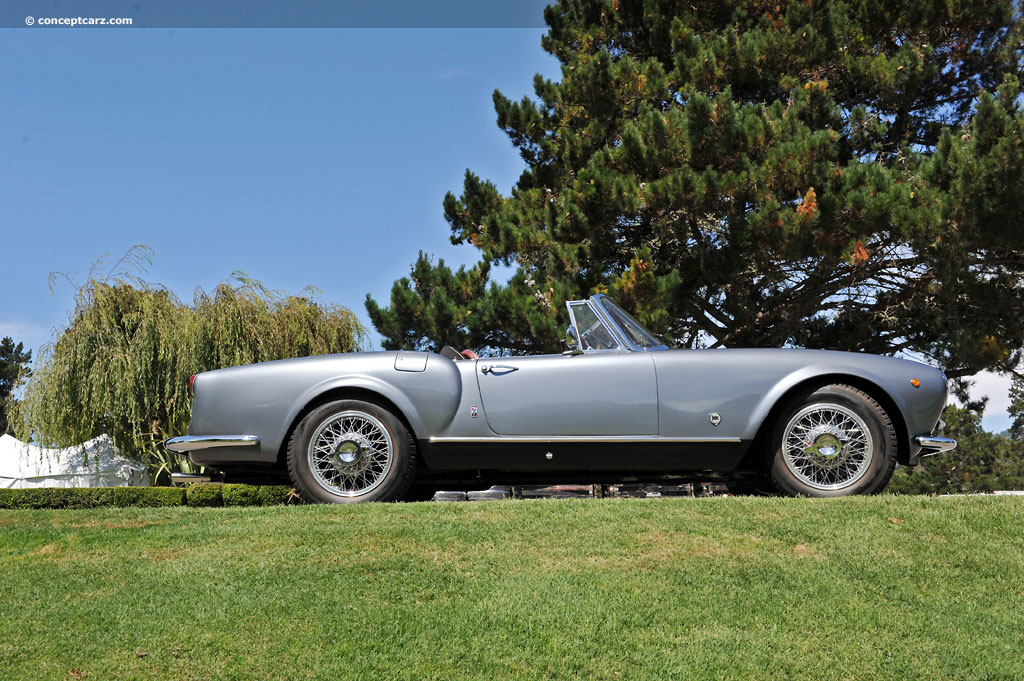 This very special automobile, produced for a scant couple of years during the mid-1950s, offered a host of bristling features in typical Lancia fashion. From the lovely Pinin Farina lines down to the remarkably modern mechanicals, the Aurelia B24 was a guaranteed classic.

The Aurelia series was comprised of a full lineup of first-rate cars, with the B20 GT coupe and B24 Spider stationed at its top. The B20 GT was an influential car in its own right. Automotive author Quentin Wilson recognizes that the car is 'often credited as the first of the new breed of modern postwar GT's.' The model that history has looked upon with the most favor, though, has been the B24, particularly the Spider of 1955.

The B24 Spider offered all the mechanical prowess of other Aurelias, and combined it with the best styling of the series. One of Pinin Farina's masterpieces, the B24 Spider is today one of the most highly regarded Lancias. It was a true roadster with a very basic top and simple side curtains as the only degrees of separation between the driver and the outside world. Yet its ample luggage space and pleasant interior begged for an alfresco getaway into the rich scenery of its Italian homeland.

Featuring monocoque construction, already a Lancia hallmark for decades, the B24 was built by Pinin Farina. That famed carrozzeria of Italy also, of course, penned the elegant lines.

With its tight, lean curves, the Lancia escaped the bulbous trends of the 1950's. At the car's front, the wheels rested beneath sleek pontoon fenders with subtle flares. Those fenders flowed back toward the rear edges of the doors in almost horizontal sweeps before quickly curving up just aft of the cockpit. The rear wheel arches, bulging slightly from the rest of the car, formed tight muscles in a predatory haunch. The B24 Spider's graceful, athletic stance belied its superb poise. The later Convertible model, produced in 1956, added more conveniences like roll-up windows but, while it still looked superb, it sacrificed some style compared to the relentlessly attractive Spider.

There was a terrific attention to detail in the Lancia's design. The way the Spider's split front bumpers led to the proud grille. The way the unfettered rear could have been grown from the soil. The way the delicate curved windshield rested lightly atop the body, an airy marvel of metal and glass placed as if only to frame for driver and passenger the gorgeous view out over the long hood. The Aurelia Spider was fine sculpture at its fastest.

All that elegance translated perfectly into the interior. Free of fussy details, its painted metal dash housed a simple array of instruments and a thin wood-rim steering wheel. The seats took up the width of the interior and, with tops flush with the car's body, blended seamlessly with the B24 Spider's outside.

All Aurelias featured mechanical sophistication that was every bit as impressive as their designs. At the heart of the B24 was a 2451cc V6 cast entirely of aluminum alloy. The Aurelia series brought to market the first ever mass-produced V6, and it was a gem. With its 60-degree V and light construction, the engine would not be out of place in a new car. The phenomenal sound may be unheard of today, but the basic design surely is not.

Vittorio Jano was the man responsible for the development of the Lancia V6, which began life as a 1754cc unit. Jano, an invaluable engineer with Alfa Romeo during the company's all-conquering racing career of the 1920's and 1930's, knew more about designing fine engines than perhaps anyone else at the time. His metallic marvel produced 118hp in the B24.

The engine was not the only impressive collection of moving parts on the Lancia. The car's other famous feature was its transaxle. Incorporating the transmission, differential, and even rear brakes all into one compact unit had several benefits to the car. Most notably, it perfected weight distribution and reduced unsprung weight at the rear axle. The result was a great-handling automobile with ballet dancer balance and razor-sharp reflexes.

Suspending the Lancia was a relatively simple system with a sliding pillar up front. The rear of the car used leaf springs, but a De Dion rear axle ensured the excellent road manners already made possible by the car's light engine and use of a transaxle.

Market values of the Aurelia B24 Spider have reached stratospheric heights, and the cars routinely sell for well over $300,000. These vehicles have become established classics with unrivaled Italian pedigree and prestige. They have rightly become known as some of the best Lancias ever made.

Wilson, Quentin. The Ultimate Classic Car Book. First. London: Dorling Kindersley Limited, 1995. By Evan AcuñaIn 1950 the Lancia Aurelia was introduced to the public at the Turin Motorshow and had been created as a replacement for the Lancia Aprilia. Under the hood was a new six-cylinder engine in 'Vee' configuration. To reduce weight various body panels had been constructed of aluminum including the hood and doors. The clutch and four-speed gearbox was mounted in the rear using a single unit with the differential. The suspension in the rear was independent while the front was a sliding pillar type.

The first in the series was the B10 berlina. Power came from a 1574 cc engine producing nearly 60 horsepower. The four-door pillarless saloon was criticized for its performance issues so Lancia answered the complaints with the introduction of the B21 produced a year later. There was little to distinguish the B10 from the B21, the only difference lying under the hood. The 1574 cc engine had been replaced with a 1991 cc engine producing 70 horsepower. To add sporty-appeal, a B20 GT Coupe was introduced in the same year. The two-door coupe was designed by Boano from Ghia. Gianpaolo Boano was the son of Ghia owner Mario Felice Boano. Production was handled by Pininfarina. It sat atop a shortened wheelbase and used a tuned-version of the 1991 cc engine now producing 75 horsepower. Production was low with only 500 examples produced. A second coupe series was created using a tuned-version of the 1991 cc engine now producing 80 horsepower. Mechanical improvements included better brakes and a lowered suspension, both resulting in better performance. Styling changes were mostly confined to the interior, the most noticeable being done to the instrument panel.

In 1950 an extended wheelbase version of the B10 was introduced featuring different tires and gear ratios. These were dubbed the B50 and the B51. When the 2-liter engine was introduced, the name was changed to B52 and B53. Production was low with the B50 having the most examples created, 583. There were 184 B52 models, 6 B55 and only 5 B56 models. A single B60 was created. The B55 and B56 were examples with the 2-liter engine and a de Dion rear suspension. The purpose of these specialty models was to allow custom coachbuilders such as PininFarina, Bertone, Viotti, Vignale, Ghia, among others to design and build unique creations. One of the more famous designs was created by PininFarina. It was a concept car dubbed the PF2000. A few examples were created for display at motor shows, such as the Lancia Aurelia B52 B JR built by Ghia for the 1953 Turin Motor Show.

Lancia lengthened the B21 and dubbed it the B15. It received a de-tuned engine, now producing 65 horsepower. Bodied by Bertone, the B15 was produced in low quantities; just over 80 examples were created.

In 1953 Lancia introduced the B20 Coupe, the third in the series, powered by a 2451 cc engine producing nearly 120 horsepower. This marked the first time a left-hand-drive version of the Aurelia could be purchased. The independent rear suspension could not handle the extra power from the new engine so it was changed in favor of a de Dion system. 720 examples were created.

By 1952 Lancia had created a replacement for the B21 berlina, the B22. It was basically the same as its replacement except for improvements under the hood. The engine had been given double-barrel Weber carburetors among other improvements which resulted in the production of 90 horsepower. There were styling changes included, most done to the interior such as the instruments and the indicators. In 1954 Lancia ceased production of the B22 and introduced the B12. During its production lifespan, nearly 1100 examples were produced.

The B12 was one of the first drastic changes to the Aurelia, both mechanically and aesthetically, since its inception. The engine was a 2266 cc powerplant producing 87 horsepower. The rear suspension was changed in favor of a de Dion system. Wind deflectors were placed on the windows and the headlights were changed. During its production lifespan, around 2400 examples were produced.

In 1955 the audience at the Brussels Motor Show was introduced to the B24 Spider. Lancia had tasked Pininfarina to design and produce a limited number of vehicles using a shortened wheelbase from the B12. Power was supplied from a 2451 cc engine. A convertible was later introduced and quickly became the favorite, with 521 Convertibles and 240 Spiders produced.

The production of the berlina ceased in 1955. The Coupe and Convertible series continued until 1958. There were a total of six series for the coupe. The fifth series began to shy away from performance gains and focused more on luxury.
By Daniel Vaughan | Jul 2007

The Aurelia was the first production car to be powered by a V6 engine. It was one of the most sporting cars of its day, having state-of-the-art construction techniques, a rear mounted transaxle and the Vittorio Jano-designed engine. These cars proved....[continue reading]

Lancia was founded in 1906 and built a reputation for their imagination and engineering excellence. After World War II, many manufacturers, including Lanica, looked to their pre-war designs to inspire and develop their first post-war cars. ....[continue reading]

The Lancia Aurelia B24 Spider America, with a top speed approaching 115 mph, was among the best-performing open sports car of its day. The coachwork was styled and constructed by Carrozzeria Pinin Farina who gave it cut-down doors, split bumpers in b....[continue reading]

Hailed by many as the first to produce a grand touring automobile, Lancia would introduce the B20 Aurelia GT designed by the renowned Vittorio Jano in 1950. It was a sporting version of the Aurelia Saloon styled by Pininfarina offering a motorcar sui....[continue reading]

Vittorio Jano's abilities were already well-documented from his days prior to World War II. Not greatly educated, Jano's talent was still undeniable. Following the war, the talented engineer would play a small, but very important role in what would b....[continue reading]