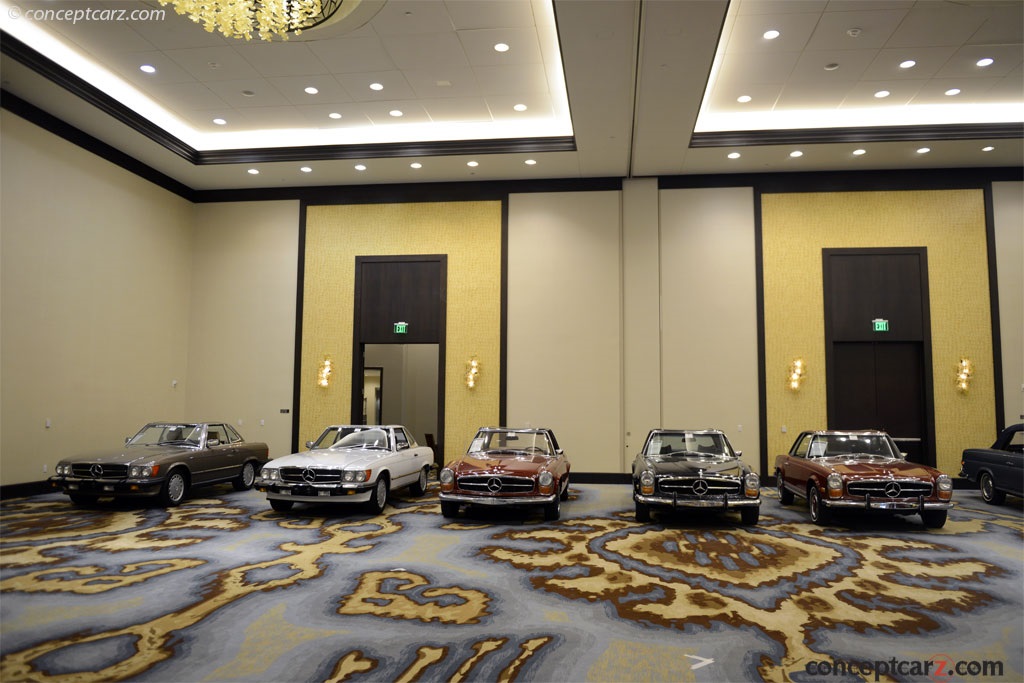 The well-known German Manufacturer chose to continue in the tradition of sporty open Grand Tourismo's, or ‘Roadsters' by Mercedes Benz, in their release of the 1960's product range. Mercedes decided to inaugurate a whole new range of sports/SL models in the 1960's following the successful launch of earlier SL models. The origins of the Mercedes race cars began in the early 1950's.

The SL's shared the same 'W 113' chassis, the ‘W' standing for 'Wagen', as well as many features and various parts in common. The last W 113 280 SL Roadster lasted for only a mere eight months from July 1970 until March 1971 before making way for the W107 series of vehicles.

The SL stands for 'Sport Light', or in German, Sport Leicht. The Gullwing was given its name due to the two doors swung up along the roof line, and the open doors took on the appearance of a seagull in flight.

The nickname 'Pagoda' was a reference to the shape of the hardtop roof. Reminiscent of the shape of a Japanese style Pagoda, the roof center is slightly lower than the side. Eventually, these were raised slightly to allow easier entry and exit, the side of the roof soon allowed for larger side windows, as well as increasing the roof strength. The 280 SL came with a flexible variation of tops, soft top, removable hardtop, or the option of both. Unofficially called the 'Californian', the option was available to order with only the removable hardtop and no soft top. Another popular available feature was ordering the hardtop roof in a different color than the body.

Mercedes-Benz achieved a timeless design with slick and proper lines, and it has been in this shape that the SL was sold for over twenty years. Much like the earlier models, the 280SL showcased an exquisitely proportioned sports body with two comfortable seats, and standard equipped with a soft-top which could be neatly stowed away under a lid fully integrated in the car. The SL also had the option of a distinctive hardtop ‘Pagoda' roof that could easily be fitted to the car in a matter of moments, with the soft-top down in place. Another popular option was the addition of a third, sideways facing seat.

Bigger, wider and heavier than its predecessor, the new generation of SL was still the perfect car considering driving-comfort, road-holding and construction. Buys had the option of various engines, including a V8 with either 3.5 or 4.5 liter cylinder, or a six-cylinder engine with a capacity of 2.8 liter. Utilizing a 2778cc, six-cylinder engine, the 280SL had a seven bearing crankshaft. Most models came with automatic transmission and had an engine that featured fuel injection. The Mercedes 280SL could achieve a top speed of 121 mph, and could reach 0-60mph in 9.3 seconds.

The engine in the 280 SL had a mechanical Bosch fuel injection system, a cast alloy valve cover, and a single overhead camshaft.

In January, 1968, the 280 SL underwent various changes and updates that included the number plate moving from the firewall to the front door jamb. The firewall insulation pad material also was updated from coarse to smooth. Hardtop front handles were made separate, and the mirror on the passenger sun visor was omitted. Elastic became the new material on door pockets rather than solid. The floor covering also changed from rubber mats to synthetic carpet. In April of 1970, the optional rear axe rations were discontinued.

Highly desirable when first launched, the 'SL' models still remain as much sought-after classics to this day. Unfortunately some critics believed the styling of the SL was boxy, and bit of a disappointment due to the 'pagoda'-styled optional hardtop. Though not as powerful as the 300 SL, or as curvaceous as the 190 SL, the 280 SL was well-balanced, and slightly delicate. Thirty years later, many parts for these models are still available from Mercedes Benz. Though expensive, they are in stock. A perfectly balanced vehicle, the Mercedes 280SL is a vehicle with a quiet confidence, with truly no competition.By Jessica DonaldsonWith its status today as a classic continually rising, the Mercedes-Benz 280 was truly a beautiful vehicle. Though not as shapely and voluptuous as the 190 SL, or as powerful as the 300 SL, the 280 was both practical and nimble, while the styling is a fine example of well-balanced design.

Produced from 1967 until 1971, the Mercedes 280 SL was the most popular SL on the classic car market. With a total of 23,885 units produced during its production span, the 280 SL is considered the most popular due to its perfected development of the vehicle, along with an engine that suits this SL series best. Though the 280 SL is slightly overweight, has a bit sluggish handling, and a relatively soft suspension configuration, the larger engine does translate into a higher straight line speed and better acceleration.

Showcased in 1963 during the Geneva auto show, the 230 SL, which was based on the 220 SE sedan was first of the SL series to be introduced. A series of luxury vehicles that were introduced by Mercedes-Benz from the late 1950's were dubbed ‘Fintail', though never officially designated as such. The nickname was a result of the distinctive rear-end, with small tail fins. Following in the tradition set by the 1960's product range of sporty open Grand Tourismo's, (referred to as Roadsters by Mercedes Benz) the 230-280 SL series featured a 'pagoda'-styled optional hardtop. This feature was eventually criticized for making the design seem boxy and was seen as a bit of a disappointment at the time. The middle surface of the 'hanging' style roof was lower than the edges of the doors and it was this distinctive look that characterized the SL-series as the ‘pagoda' model.

Near the end of 1966, a larger engine was fitted, which made it the 250 SL, a much more modern unit from the 250 S sedan. The 280 SL model was created in the 1968 model year by once again enlarging the engine. Continuing to be produced until 1971, the 280 SL was eventually replaced by the new 350 SL model. Over time, the SL series has transitioned from an elegant and sporty line, to more large luxurious models, without a youthful appeal anymore.

Designed by Paul Bracq with great attention to detail, unfortunately at first the styling of the 280 SL was not appreciated by the general public. Customers considered the vehicle to be too slow to be a sportscar, and too small to be impressive, and it seemed to be a scaled down version of the saloon car models. Today, this design is considered to be one of the first examples of modern corporate styling, which today is quite popular.

Inside the 280 SL, the dashboard was constructed very similar to those in the saloon car models. This vehicle was designed with the aim of speeding through the autoban, or cruising around the city, rather than being a sports car. Leather upholstery was an optional feature, while the interior was finished with standard vinyl. Wood veneer was used on the console between the chairs, and along the top of the dashboard being the windscreen, which was seen as a remarkable feature.

The 2+2 model model allowed for an additional small row of seats placed behind the front seats, but only small children could sit there due to the lack of leg room. Ergonomically formed bucket seats were placed in the front, and the frame of the front window was strengthened so it do as a roll-over bar, but only in combination with a fitted hardtop. The head designer of Mercedes-Benz development of the time, Béla Barényi was credited with the Pagoda-style hardtop patented design that could endure a 1,000 kg load without deforming.

Disappearing completely into the boot of the vehicle, the folding roof was closed and covered by a metal lid. The 2+2 version lacked the folding roof, and the extra row of seats took over the additional space that was created. Luggage space could be found by folding down the back rest of the 2+2 model.
More aerodynamic than the hardtop, the convertible could reach about 4 kph more than the hardtop version, which was considered slightly odd.

The new SL-series was introduced in 1963 with a straight 6-cylinder engine with a displacement rate of 2306 cc, which delivered 150 hp at 500 rpm. In December of 1966, this engine was replaced by a new 2436 cc unit which still turned out 150 hp. This new engine featured a crankshaft engine with seven bearings rather than four. The following year, again in December, a 2778 cc engine was fitted, which now produced 170 hp at 5750 rpm. Mainly to improve torque, these engine revisions were synchronous to the engine changes in the mid-range sedan line. With top speed remaining near the same, the range fell between 185 to 195 kph. All engines shared a mechanical fuel injection system.

She 280 SL measured 428.5 cm in length, 176 cm in width, and 132 cm in height with the hardtop. The first 230 SL's weighed 1295 kg, and the last 280 SL weighed in at 1360 kg. The 280 SL was considered to be quite heavy for a sports car. The top speed and acceleration didn't win many points with Mercedes-Benz customers, but a comfortable high cruising speed could be maintained for a long amount of driving time. This made the 280 SL an ideal vehicle for the Autobahn-express.

The second most popular SL of the series is the 230 SL, the original model. Today, a 230 SL in excellent condition, this classic can produce up to twice the original purchase price.
Today, the SL-series from the 1960's is becoming much more popular on the classic car market, as its fans remains stretched throughout the world. These fans stay united in local clubs that keep a close contact with each other. The market value of the classic vehicles is subsequently on its way up.By Jessica Donaldson

Daimler-Benz engineers developed a successor to the popular 300SL Gullwing, a legend to this day, the most sought after sports Mercedes in existence. The new SL design (W113) was contemporary, bright, comfortable, and spacious for its era. First se....[continue reading]

This European-specification, left-hand drive 280SL is equipped with the rare and optional five-speed manual gearbox. The previous owners kept the car for two decades and during his ownership restored the body and interior trim. Since the current owne....[continue reading]

This 1971 Mercedes-Benz 280SL Roadster features an automatic transmission, a Becker Europa AM/FM radio, and air conditioning. It has had limited ownership. The car has both a soft and hard top. It is finished in green with matching upholstery and top....[continue reading]

The Mercedes-Benz 280SL's enjoyed phenomenal success, particularly in the all-important North American market where the optional automatic transmission was considered an essential feature by the majority of customers. They offered tremendous appeal t....[continue reading]

The W113 design made its debut with the Mercedes-Benz 230 SL of 1963. It wore styling by Paul Bracq and featured the pagoda-style removable hardtop. Power was from an inline-six offering 150 horsepower. Over the years, the engine was modified and lat....[continue reading]

This Mercedes-Benz 280 SL Pagoda is a two owner car that was originally delivered in Europe. It was ordered from the factory in a period color combination of red with a two-tone brown interior. It has a black hard and soft top with color-keyed wheel ....[continue reading] 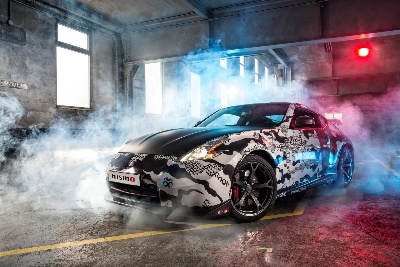