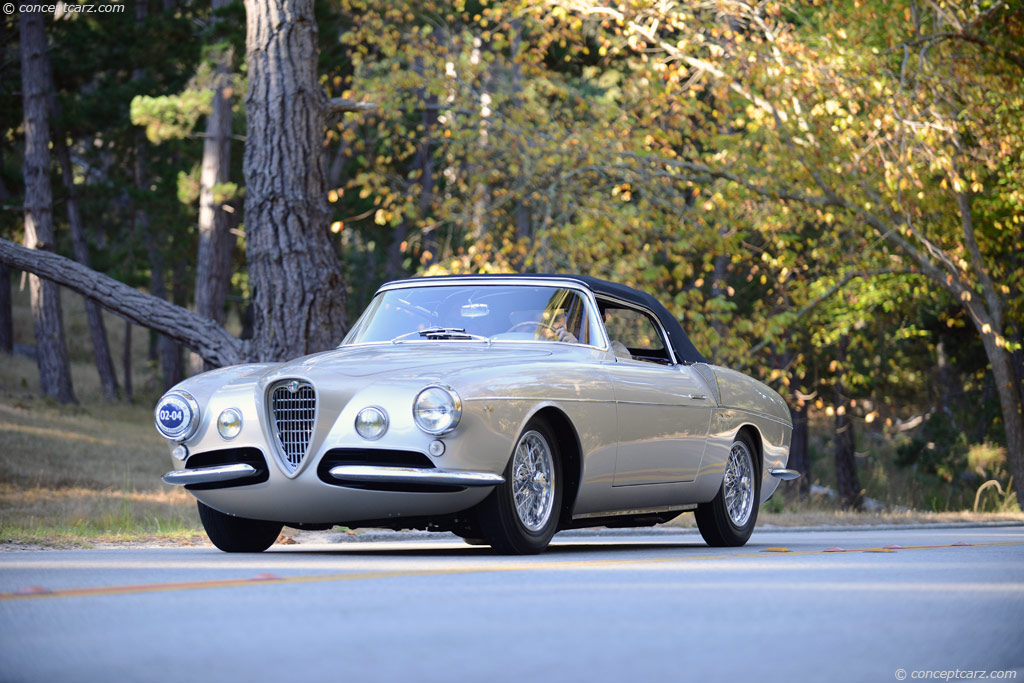 The 1900 Series was Alfa Romeo's first all-new postwar model and brought with it innovations that would remain with the company for the following half-century. It had a unit-body construction, double-overhead-cam, inline four-cylinder engine with aluminum head and hemispherical combustion chambers, and wore coachwork by several Italian leading coachbuilders including Pinin Farina, Vignale, Bertone, Zagato, and Touring.

After nearly a decade of production, 854 examples of the 1900C SS were built. The 'C' denoted its short-wheelbase ('corto' or 'short') and the 'SS' declared its competition-oriented specifications. They had a racing-specification engine, gearbox, and revised final-drive ratios. Additionally, they had air-cooled 'Alfin' self-adjusting brakes. The five-speed manual gearbox was synchronized on second, third, and fourth gears.

The 1900 C SS earned success at the major races and rallies of the era, including the Stella Alpina, Mille Miglia, and the Targa Florio.

Much of Europe was devastated by bombing and attacks during World War II and factories that had been producing vehicles switched to producing materials and vehicles in support of the war efforts. The war ended in 1947 and by 1950 Alfa Romeo had a new vehicle ready for serious production. It was designed by Dr. Orazio Satta Puliga and was the first Alfa Romeo to use unitary construction. Under the....
Continue Reading >>

The Alfa Romeo 1900 Series was produced from the very early 1900s through 1959. It was designed by Italian designer, Orazio Satta, and became the companys first car built on a production line. This vehicle signaled a radical departure from the type of business Alfa Romeo had constructed in the pre-War era. This shift towards an affordable production automobile was a necessary evolution for the....
Continue Reading >>

Its Unique Features Include a 5-Speed Column Shifter
Beginning with the launch of a sedan in 1950, the 1900 was the first Alfa Romeo model to emerge from the legendary marque's factories after World War II, its first four-cylinder engine, a....[continue reading]

Ing. Orazio Satta designed Alfa Romeo's 1900 series of automobiles. It was a bold, new design that was a complete departure from Alfa's prior designs. The model was introduced at the Paris Motor Show in the fall of 1950 where it was met with much pra....[continue reading]

Chassis number CO1998 was manufactured on the 28th of March in 1955 and sold on the 26th of May in 1955 to Societa per il Commercio dei Prodotti Alfa Remeo, Switzerland. During the 1960s the front of the car was modified, possibly to comply and compe....[continue reading]

Al 'Papagallo' Williams, famed restaurateur and former owner of the Papagallo Room of the Fairmont Hotel in San Francisco, drew up his wishes and sent the order to Ghia, of Turin, Italy. The result was a 1900 Alfa with a gleaming metallic gray, hand-....[continue reading]

The Alfa Romeo 1900 was presented in 1950 at the Paris Salon de l'Automobile, and was offered as a four-door sedan and two-door coupe. Styled by Alfa's design director, Orazio Satta Puliga, it was Alfa's first new post-war production model, first bui....[continue reading]

The Alfa Romeo 1900 Series, engineered by Orazio Satta Puliga, made its debut at the 1950 Paris Motor Show. It would become a commercial success and was the company's first model built on a standardized production line with unitized construction and ....[continue reading]

In September of 1954, Elio Zagato sourced a 1900C chassis and gave it lightweight aluminum coachwork that featured a sculpted nose and bulged hood with dual inlets designed to provide adequate space for the higher-profile Weber carburetors. ....[continue reading]

This Alfa Romeo 1900C SS Coupe was in controlled storage for over four decades and then given a five-year restoration. It was completed in early October of 1955 and finished in Grigio Biacca (Light Gray) paint and, in January 1956, the car was dispat....[continue reading]