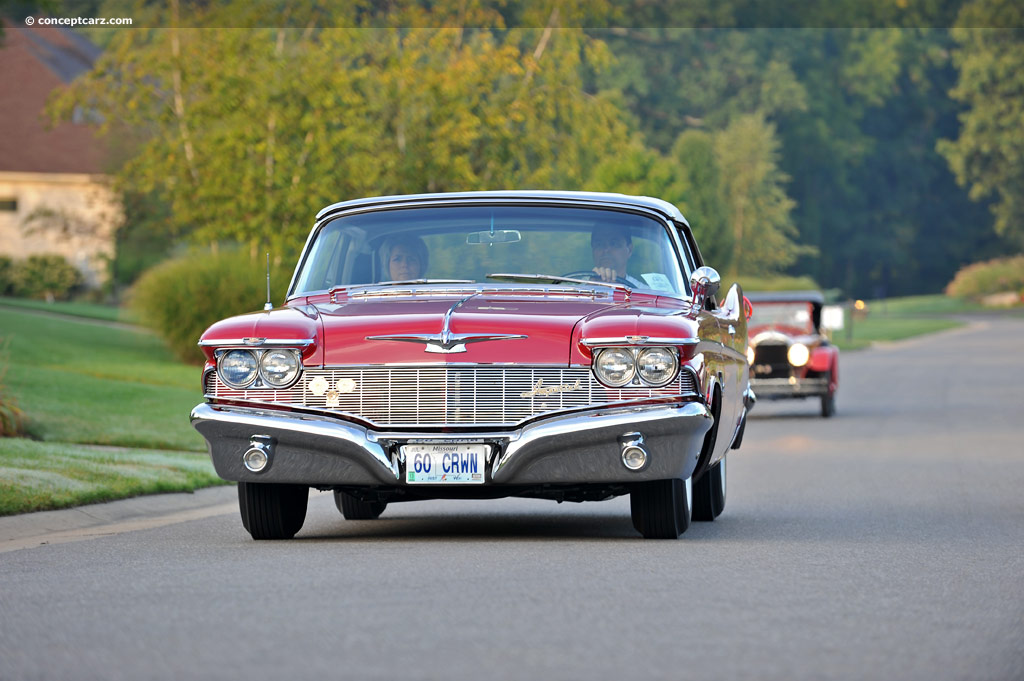 The Chrysler Corporation was formed by Walter P. Chrysler in 1924 and quickly became one of America's top three automakers. The lineup expanded quickly during the 1920s, beginning with the addition of the top-level Imperial line form 1927-1928.

In early-1955, Imperial was registered by the Chrysler Corporation as a separate marque, giving it its own distinct identity in the market. For 1957, the Imperial models wore Virgil Exner redesigned bodies which became an unqualified market success due to its bold styling, excellent handling, comfort, and remarkable performance.

The Chrysler Corporation switched to unitized bodies for 1960, while the completely restyled Imperial models continued to use the separate body-on-frame construction with reinforced and undercoated bodies utilizing heavier-gauge sheet metal.

1960 brought new bodies for the Imperial vehicles with over-hanging front fenders and slightly recessed dual headlights. They were imposing yet elegant, with large footprints, generous use of chrome, tail fins, and distinct tail lights. The tailfins now terminated with a pronounced forward tilt. Below the finer mesh-type grille was a full-width chrome V-shaped bumper with integrated circular signal light pods. The Imperial name was written on the grille and front fenders.

The interior featured an aircraft-inspired instrument panel with a pair of large pod-shaped nacelles, illuminated by an advanced electroluminescent lighting system developed by Sylvania for the Chrysler Corporation.

The Imperial Crown Series had all the body styles of the Custom Series plus a convertible which sold for $5,800. The 2-door hardtop pricing began at $5,400 while the four-door versions sold for $5,650. Once again, the 4-door hardtop was the most popular with 4,510 examples sold.

The Imperial Crown was distinguished from its Custom Series sibling with the word 'Crown' located beneath the Imperial nameplate. Both models used the 129-inch wheelbase platform and all Imperials were powered by an overhead-valve 8-cylinder engine displacing 413.2 cubic-inches and offering 350 horsepower. Standard equipment on the Crown Series included vanity mirror, outside rearview mirror, a six-way power seat, and license plate frame. All 1960 Imperials rode of 8.20x15 tires while the Crown Imperial rested on 8.90x15.

The Crown Imperial had a 149.5-inch wheelbase platform, had limousine body styles, and a base price of $16,000. Only 16 examples were built. These well-equipped, expensive, and exclusive vehicles were equipped with auto pilot, dual radios, automatic headlight dimmer, three heaters, speakerphone, power windows, and a standard exterior color of black.

The Imperial LeBaron Series had a rectangular (instead of the wraparound) rear window, sedan, and 4-door hardtop sedan body styles, LeBaron nameplates, power windows, and two-tone paint. The base price was $6,300 and approximately 1,691 examples (both body styles combined) were built.
by Daniel Vaughan | Apr 2020

'America's Most Carefully Built Car'
In an effort to establish itself as a legitimate contender in the Cadillac class, Imperial became a stand-alone division of the Chrysler Corporation in 1955. An Imperial-exclusive assembly line was the ....[continue reading]

The Imperial automobiles of the 1960s were truly remarkable vehicles, with strong performance from their powerful 413 cubic-inch engine to their excellent handling provided by the torsion-bar suspension. The Imperial line shared only its power-train....[continue reading]

This car is an original 'black plate' California car that was sold new by Leach Motor Company of Fresno. It has been given an award-winning restoration with no expense spared that was performed by Hibernia Auto Restoration. It is finished in the corr....[continue reading]

This 1960 Chrysler Crown Imperial was purchased as total wreckage by the current owner and underwent a six-year body-off, nut-and-bolt restoration to completely correct condition. It is one of only 1,594 Imperial Crown Sedans built in 1960 and as opt....[continue reading]

The 1960 Imperial was touted as being 'America's Most Carefully built car' and 'America's Only All-New Luxury Car.' While the rest of the Chrysler line shifted entirely to unibody construction, the Imperial retained its 1957 vintage body-on-frame pla....[continue reading]

In 1955, Imperial became a stand-alone division of the Chrysler Corporation when a separate Imperial-exclusive assembly line was established. Imperial was chasing Cadillac, the top United States luxury brand. The Imperial advertising tagline was 'Ame....[continue reading]

'America's most carefully built car.' 'Are you too conservative for this?' teased a 1960 Imperial Crown Convertible ad. 'Of course you're not. Even though it's young and possibly a little rakish, you've noticed how beautifully the Crown Convertible s....[continue reading]

1960 saw the Imperial continue with the body-on-frame construction that Chrysler was beginning to move away from. They had deeply vee-d front bumpers, even taller tailfins, and an excessive amount of chrome trim on the front, back and all around. Pow....[continue reading]

In an effort to establish itself as a legitimate contender in the luxury class, Imperial became a stand-alone division of the Chrysler Corporation in 1955. For 1957, Imperial received an all-new exclusive platform. The 1957 through 1961 Imperials rep....[continue reading]

In 1955 Chrysler Corporation official registered the Imperial as a separate brand and within two years Virgil Exner had made merry with a design makeover. The 1960 Imperial was positively reviewed....Motor Life wrote 'it handled and rode bette....[continue reading]

A young and progressive designer named Virgil Exner was certainly ahead of his time. Known as the creator of 'The Forward Look' cars, he took a lineup of cars that were rather tall and stodgy and created the distinct low and sleek designs that are ea....[continue reading]

Chrysler had been using Ghia to build concept and show cars starting in the late 1940s. To produce the Crown Imperial Limousines, Chrysler shipped partially assembled Imperial hardtop coupes with 129-inch wheelbases and a reinforced X-frame. The chas....[continue reading]