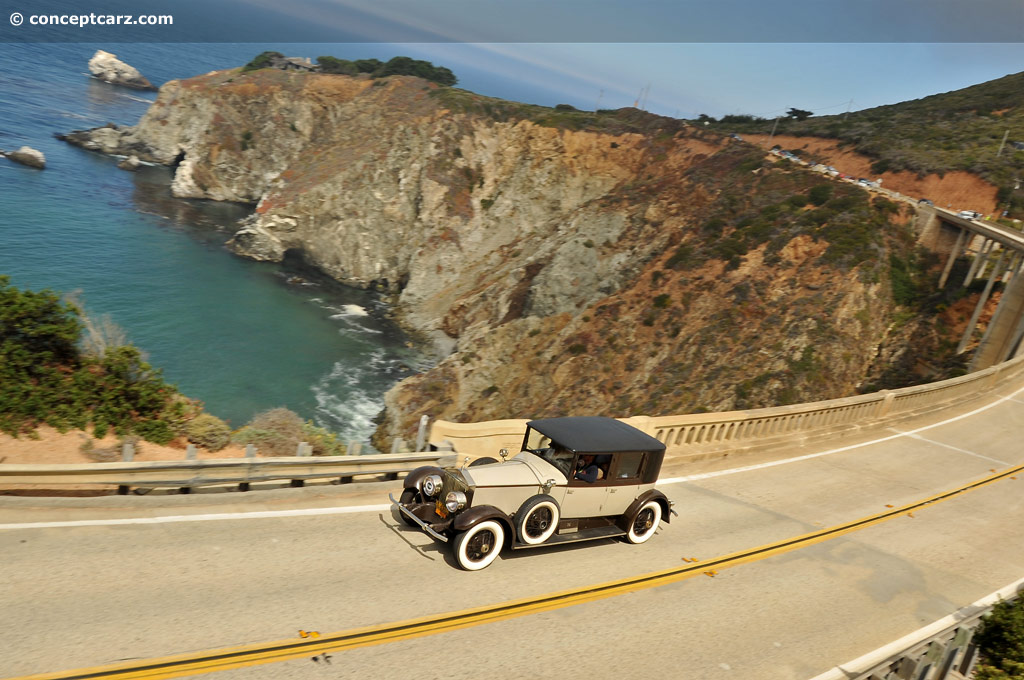 Rolls-Royce produced 7,874 examples of the Silver Ghost from 1906 through 1926. In 1925, the 'New Phantom' made its debut and came with a larger engine with pushrod-operated overhead valves instead of the Silver Ghost's side valves. Production was done in Derby, England, and Springfield, Massachusetts, in the United States.

The 'single model' Rolls-Royce policy was proven successful for the company. After the end of The Great War, however, the recession in the motor industry necessitated the introduction of a smaller, cheaper 20HP car to be built alongside the existing 40/50 Silver Ghost. Henry Royce's design incorporated several modern features such as overhead valve-gear for its 6-cylinder engine, a 'Hotchkiss drive' rear axle and a center-change gearbox. Several of these developments pioneered on the smaller sibling would make its way into the 40/50HP Silver Ghost replacement.

Rolls-Royce design philosophy remained careful evolution rather than revolutionary gadgetry. Numerous revisions to the chassis of the Silver Ghost demanded a new model name, and the revised chassis was dubbed the New Phantom by the factory. Rolls-Royce never used the Phantom I designation, but with the introduction of the Phantom II in 1929, the 'Phantom I' was applied to help distinguish it from other generations with the same model name. Production of the 40/50 Phantom would last until 1931 with 3,512 produced. Derby production would begin in 1925 and the following year in the Springfield, Massachusetts plant, owned by Rolls-Royce. Prior to the crash in 1929, production reached twelve chassis per week at the Springfield plant, but that number fell abruptly when the Great Depression affected the economy. By the time Phantom I production ended in 1931 at Springfield, about 1,240 Phantom I chassis had been built.

Rolls-Royce produced the mechanical parts and the chassis. The bodies were fitted by a coachbuilder selected by the buyer. The list of coachbuilders included Baker, Mulliner, Hooper, Park Ward, Thrupp & Maberly, and Zagato. American Phantoms could be bought with standardized bodies from Brewster & Co., which was owned by Rolls-Royce. The main differences between the UK and U.S. Phantoms included the transmissions and wheelbases. Both had the same standard 143.5-inch wheelbase. The U.S. long-wheelbase version measured 146.5 inches while the U.K.'s measured 150.5 inches. The US models had a three-speed transmission, the UK a 4-speed, and both used a single dry-plate clutch. Some of the UK New Phantom's had the fuel gauge on the tank and some US models had one on the dash. The US models had a centralized Bijur system which easily lubricated all the oil points with a stroke of a single pump. The UK Phantoms had Enots nipples which required a special Enots oil pressure gun and required servicing at 500, 1000 and 200 mile intervals.

Powering the Silver Ghost was a new pushrod overhead valve straight-6 engine constructed as two groups of three cylinders with a single detachable head. It displaced 7.7 liters and had a 4.25-inch bore and undersquare 5.5-inch stroke.
by Daniel Vaughan | Dec 2019

Although the Silver Ghost had been constantly improved over its life span, by the 1920s other manufacturers had begun to close the performance gap, and the decision was made to produce a new car. By 1925, the New Phantom (retrospectively called the Phantom I when the Phantom II was introduced in 1929) was ready. A new chassis had not been built so the car used the Ghost chassis. This meant that....
Continue Reading >>

Rolls Royce launched the new Phantom in May of 1925. Rolls-Royces replacement for the original Silver Ghost, the Phantom was built in both the U.K. and the U.S. following a year later in introduction and two years in replacement. Usually listed as Phantom I, it featured a new pushrod-OHV straight- 6 engine, which was a vast improvement over the Silver Ghost. The engine was constructed with three....
Continue Reading >>

Frederick Henry Royce was an engineer and the Honorable Charles Stewart Rolls was a man with many talents. He was an aviator, driver, and automobile enthusiasts. In the world of business, he excelled at marketing. The Rolls-Royce Company began its distinguished career in the early 1900s, focusing on quality and performance. During 1905 and 1906, forty vehicles were produced, all with four-cylinder....
Continue Reading >>

Frederick Henry Royce was an engineer and the Honorable Charles Stewart Rolls was a man with many talents. He was an aviator, driver, and automobile enthusiasts. In the world of business, he excelled at marketing.....[continue reading]

'Playboys' were replacement bodies. When Rolls-Royce of America found themselves with too many used limousines, they would remove the limousine bodies from good chassis and have Brewster fit Playboys. These were relatively inexpensive bodies withou....[continue reading]

This is an American Rolls-Royce, one of 3,000 cars built in Springfield, MA, between 1920 and 1931. It was delivered in 1928 with a Lonsdale limousine body. In 1934, Brewster & Company of New York re-bodied it was a custom-built convertible coupe b....[continue reading]

Not all Rolls-Royce cars were produced in England. Produced by Rolls-Royce of America, these fine automobiles were manufactured in Springfield, Massachusetts from approximately 1920 to 1931. The majority of Phantom I cars carried bodies by Brewster....[continue reading]

This 1927 Rolls-Royce Phantom I Brougham Limousine de Ville wears coachwork by Barker & Company and rides on a wheelbase that measures 150 inches. The car is painted in 'Hershey Chocolate Bar Brown' with a faux cane-work on the lower rear body, a bla....[continue reading]

Rolls-Royce chassis were constructed both in England and, beginning in 1921, in Springfield, Massachusetts. The second model to be built in the U.S. was the Phantom 1, beginning in 1922. Bodies were custom built by many accomplished coachbuilders but....[continue reading]

This Rolls-Royce Phantom I has been owned by the same family for nearly 50 years! It was restored in the 1960's and 1970s and is regularly used for touring. This Rolls-Royce was built in Rolls-Royce's American manufacturing facility in Springfield, M....[continue reading]

This Rolls-Royce Phantom I Kenilworth Sedan was delivered on December 22nd of 1928 by California agency W.C. Darling to John Ford. The Brewster-bodied vehicle was originally finished in a creamy gray that is still able to be seen on certain sections ....[continue reading]

There were just 20 Derby models built, including the Speedster, which featured a slightly different rear fender arrangement. The Derby and the Ascot were the only four-passenger tourers produced by Brewster for the Springfield Rolls-Royce. ....[continue reading]

The Rolls-Royce Phantom I chassis was identical to that of the Silver Ghost and was offered on two different wheelbase lengths from which to choose: 143.5 inches or the longer 150.5 inches. The Phantom I gearbox was also the same as before, except th....[continue reading]

The chassis of S 359M was constructed in Springfield, MA in the summer of 1927. Rolls-Royce of America had purchased the Brewster Body Co., in Long Island City, and the chassis was fitted with a temporary seat and protection and driven from Springfie....[continue reading]

It was 1925, and the fabled Silver Ghost, which had been launched in 1906, was being retired. After seven years of experiment and test the six-cylinder Phantom chassis was introduced. The New Phantom, as it was called, received the Phantom I designat....[continue reading]

It is not remembered even by many car enthusiasts that Rolls-Royce built automobiles in the United States. The factory was located in Springfield, Massachusetts and built cars from 1921 to 1931. As a result, these cars are known to Rolls-Royce aficio....[continue reading]

Frank Woolworth's chain of five-and-dime stores made his family one of the wealthiest in America. Mr. Woolworth's estate accounted for 1/1,214th of the U.S. GNP at the time of his death in 1919, which passed to his daughter Jessie. Jessie married Jam....[continue reading]

Thirteen Springfield-built Rolls-Royce Phantom models were given Playboy Roadster coachwork. This example was given its coachwork in 1933 for the car's second owner, Sonya Levien Hovey. It was later acquired from Mrs. Hovey by Warner Brothers Studios....[continue reading]

This Phantom I develops 100 horsepower from a 6-cylinder engine and weighs 3,911 pounds. Twelve Experimental 'New Phantoms' were built as Rolls-Royce discontinued the Silver Ghost series. This Rolls-Royce is one of two that survives with the other on....[continue reading]

The Ascot Tourer was a five-passenger open model with refined styling, flowing fenders, and nearly horizontal concave polished accent along the beltline. In the front was a one-piece windshield. It is believed that 28 Ascot Tourer bodies were built, ....[continue reading]

Rolls-Royce introduced the New Phantom (retrospectively known as the Phantom I) in 1925 as a replacement for the Silver Ghost. It had an entirely new overhead-valve six-cylinder engine displacing 7,668cc, and a disc-type clutch and adjustable radiato....[continue reading]

The Rolls-Royce New Phantom made its debut as the successor to the Silver Ghost in 1925. It wasn't until the introduction of the Phantom II that the company decided to re-christen the New Phantom as the Phantom I. The chassis was basically the same a....[continue reading]

This unrestored, American built Phantom Rolls-Royce is one of 1,241 built from 1926 to 1931. It is fitted with a Brewster St. Stevens body which is commonly referred to as a Sedanca de Ville.....[continue reading] 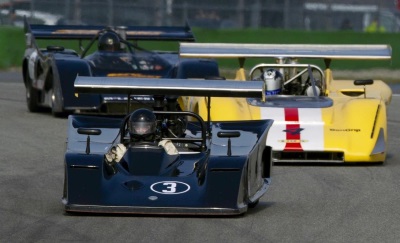 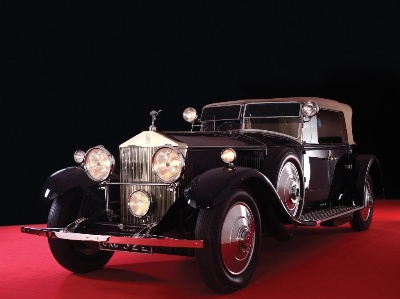 Total 1927 Rolls-Royce Phantom I production: 0
© 1998-2021. All rights reserved. The material may not be published, broadcast, rewritten, or redistributed.