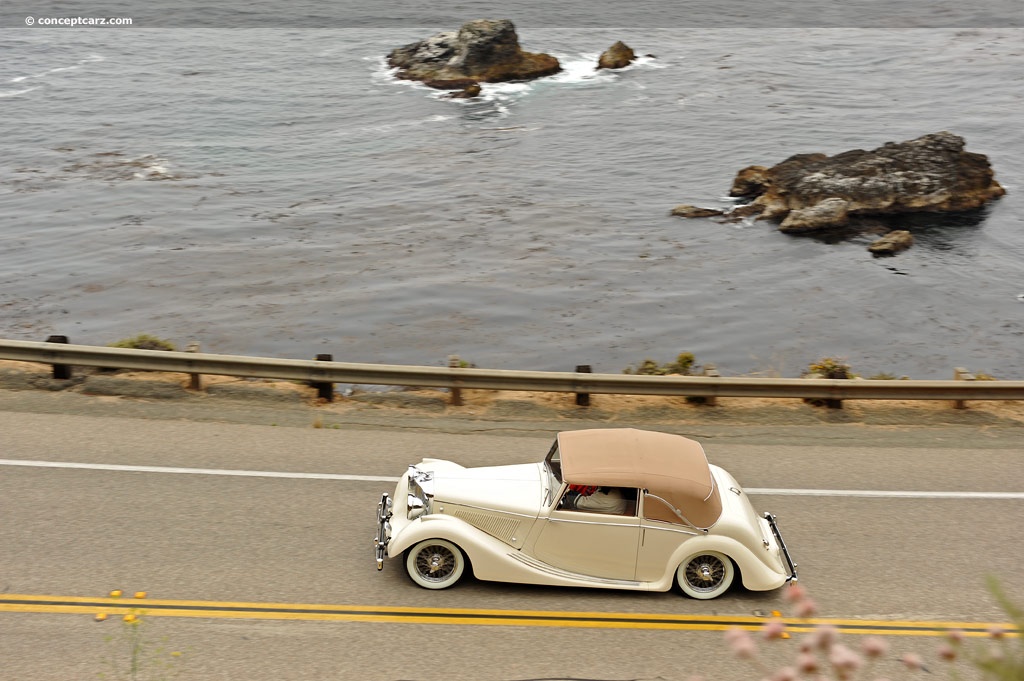 Founded in 1922 as SS Cars Ltd. in Blackpool, England by William Walmsley, it branched out into motor manufacture in 1926. The company's first major success was a sports saloon resting on the Austin Seven chassis wearing a design by Walmsley's partner, William Lyons. The company changed its name to Jaguar in 1945 when production resumed after World War II (jettisoning its prefix initials and the unwanted Nazi connotations). The British-based luxury car manufacturer originally headquartered in Browns Lane, Coventry, England but now at Whitley, Coventry. The company's slogan during the 1950s was 'Grace, Space and Pace' to promote its growing product range, however, in many respects, the Coventry company had birthed this mission statement with the new 6-cylinder sedan of the late 1930s, offered with either a 2.5-liter or 3.5-liter overhead-valve engine.

The SS1 arrived in October of 1931 using the chassis from the Standard, who also provided the four-speed gearbox and six-cylinder side-valve engine. The SS1 had a sporty persona, an attractive price, and better-than-average specification.

The SS 2.5-liter Drophead Coupe was introduced in 1937, and 249 vehicles were built before production came to an end in 1939. These cars were powered by a 2.5-liter overhead valve engine, producing 102 horsepower and had a top speed of 90 mph. When peace-time resumed, the newly renamed Jaguar Cars, like the majority of motor manufacturers, commenced post-war production with a range of pre-war designs with mild improvements. The lineup included the compact 1½-Litre four, and the 2½/ and3½-Litre six, retrospectively known as the 'Mark IV'.

The Mark IV used a 120-inch wheels and a separate chassis using a beam front and live rear axle suspension on semi-elliptic springs, lever-arm dampers, Burman worm-and-nut steering, and Girling mechanical brakes. The all-steel coachwork was available in drophead coupe or saloon configuration with a well-appointed interior. In use by SS Cars since 1934, the Standard engine was a seven-bearing six which in Jaguar specification came with a Weslake overhead-valve cylinder head and backed by a four-speed manual gearbox. The 3,485cc overhead valve straight-six engine developed 125 horsepower and 185 lb-ft of torque, helping the Mark IV achieve speeds of nearly 100 mph.

The post-War Jaguar models were distinguished from the pre-war models with a radiator badge that now reads 'Jaguar' and was accompanied by the engine size. The 'SS' badge had resided in the center of the rear bumper and was replaced by a 'J'. The cars now rested on 18-inch wire wheels as standard, with disc type wheels optional. Ace covers were also optional to fit over the wire centers, and the spinners for the wire wheels featured the new 'Jaguar' logo.

Most of the mark IV models wore factory bodies. For customers seeking bespoke coachwork, Jaguar offered the Mark IV in rolling chassis form for bodying by an independent coachbuilder. In total, just 12 examples of the 3.5-liter Mark IV were built in rolling chassis form, with ten going to Switzerland and two to Belgium. 376 examples of the 3.5-liter Jaguar Mark IV Drophead Coupes were built in left-hand drive configuration during the short production run spanning from December 1947 to September 1948 (chassis numbers 637301 - 637376). Total 3.5-liter Production, from 1937 through 1948 reached 3,162 examples. A total of 11,952 examples of the combined 1.5, 2.5, and 3.5-liter MKIV cars were reputedly built.

The Mark IV remained largely unchanged until the 1948 Motor Show which saw the introduction of the sensational XK 120 Sports Car and the MKV range of saloons and drophead coupes.
by Daniel Vaughan | Apr 2020

During the 1940s Jaguar produced vehicles known as Litre cars such as the 1.5, 2.5, and 3.5 Litre models. They were powered by engines designed by the Standard Motor Company. The 1.5 Litre engine was supplied by Standard but the larger variants were produced by Jagauar. Production of the 1.5 Litre car lasted from 1935 through 1949. Horsepower varied over the years as did other various specifications.....
Continue Reading >>

Pronounced Mark Four, the Jaguar Mark IV was a saloon vehicle built by Jaguar from 1945 through 1945, and was a re-launch of a pre WWII model produced by SS Car Ltd from 1936.The company was renamed Jaguar Cars Ltd. after the war. The nomenclature ‘Mark IV was applied by the trade to simply differentiate it from the officially named Mark V. The Saloons were named SS Jaguar 1 ½ litre, 2 ½ liter or....
Continue Reading >>

This Three-Position Drophead Coupe has the ability to have it's top raised, lowered, or remain halfway up in the 'DeVille' style. There were 4,420 examples of the 3.5-liter Mark IV produced in total by Jaguar with just 560 being Drophead Coupes. Of t....[continue reading]

The postwar market was treated to a healthy lineup of vehicles from Jaguar including 1.5-, 2.5-, and 3.5-liter sedans. The export market was an important part of Jaguar's business, and the American market received only six-cylinder models. These earl....[continue reading]

The Jaguar Mark IV is a 4 door (Saloon) car built by Jaguar from 1945 to 1949. It was a re-launch of the Pre-War model made by SS Cars Ltd. Before the Second War the name Jaguar was the model name given to the complete range of cars built by SS Cars ....[continue reading]

This 1948 Jaguar Mark IV wears drophead coupe coachwork and is powered by the 3.5-liter engine mated to a 4-speed transmission. It has a three-position top, full toolset, and is finished in black with burgundy interior.....[continue reading]

Following the War, Jaguar cars were named only for their engine displacement, with the 3.5-liter engine topping the line. They were retroactively known as the MK IV following the late 1948 debut of the Jaguar MK V. They were available as saloons and ....[continue reading]

This Jaguar Mark IV Drophead Coupe is a left-hand-drive, U.S. delivery example that was originally delivered to International Motors, of Los Angeles, California, on June 25th of 1948. It still retains its original body and engine. The car was given a....[continue reading]

This 1948 Jaguar Mark IV 3½-Litre Drophead Coupe is a left-hand-drive example that was completed on May 3rd of 1948 and shipped on May 28th to S.H. Lynch & Co., the distributor in Texas. The first owner and early history in the U.S. have not been rec....[continue reading]

The newly renamed Jaguar Cars resumed automobile production in 1945 after World War II had come to a close with a range of vehicles wearing pre-war designs, albeit with minor improvements. These vehicles were meant to get Britain back on the road and....[continue reading]