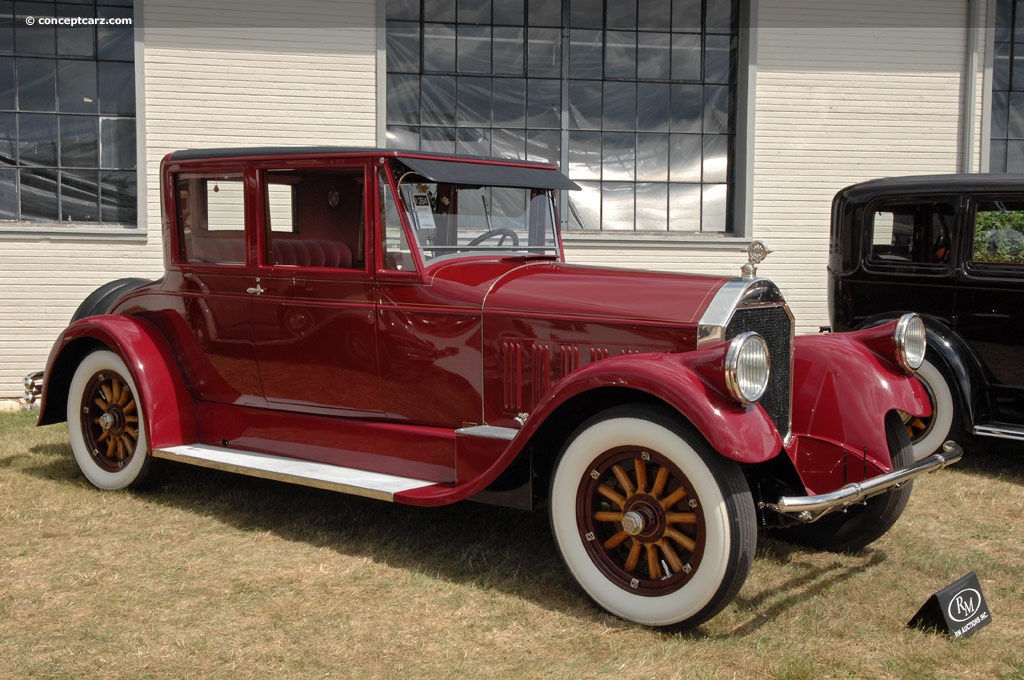 The Pierce-Arrow Company had a history that dates back to 1865 when it made birdcages and other household related items such as iceboxes and bathtubs. In 1872, George N. Pierce bought out his partners and renamed the company after himself. In 1896, bicycle production was added and within a few years, in 1900, a steam car was built. A gasoline-powered car followed a few months later. The following year, the Pierce manufactured a DeDion-engine 'Motorette'. Their rise to fame was in 1904 with the introduction of the Great Arrow powered by a four-cylinder engine. It was a reliable car with plenty of appeal and power. In 1905, Pierce's son Percy drove one in the inaugural 1905 Glidden Tour to an overall victory. Pierce cars would claim the title four years in a row. By 1909, the name 'Pierce' and 'Arrow' were so linked together, that the company was renamed to 'Pierce-Arrow.'

In 1913, they revolutionized the design of their vehicles with fender-mounted headlamps. The design was attractive and smooth that allowed for a higher and wider projection of the light beams.

Pierce-Arrow relied on its six-cylinder engines for many years, even when its competition moved to larger eight- and 12-cylinder engines. They would use the six-cylinder until 1927 with many modifications and updates along the way. In 1925 they were fitted with T-heads with four-valves per cylinder and twin ignition.

The Model 36 was produced from 1926 to 1928 and each example was subject of rigorous testing. Each engine was placed in the dynamometer room and run for 15 hours at varying speeds. This test simulated 500 miles of open-road driving. At the conclusion of the test, the engine was disassembled with all its moving parts thoroughly examined for signs of wear. If none were found, it was re-assembled and tested for two hours in a cork-walled silent chamber where its power output and internal friction were closely monitored. Only after the engine had passed these tests were they permitted to power a chassis. When the chassis was assembled, further testing followed. They were subjected to chassis dynamometer tests for five hours, followed by a 35-40 mile road test. If the chassis completed this test, the body was mounted and the tire car was again tested. Under the supervision of a chief tester, further testing of the completed car was done.

The Model 36 was powered by a 414 cubic-inch T-head 24-valve twin-ignition six-cylinder engine capable of producing 100 horsepower. The engine was mated to a three-speed manual gearbox with stopping power provided by vacuum-boosted four-wheel mechanical brakes.

It is believed that 1900 examples were produced in fifteen cataloged body styles.
By Daniel Vaughan | Apr 2008

The Pierce-Arrow Company was a prosperous and talented motorcar company during the early years of automotive production. Their cars were well-engineered powered by powerful six-cylinder engines during the teens. The pinnacle was the Model 66 which sp....[continue reading]

This Model 36 Pierce Arrow has a Seven-Passenger Limousine body. It is a low-mileage restored car that is finished in gray with black moldings and fenders. There are dual-sidemount spare tires, a small folding trunk rack, and is fitted with drum-ty....[continue reading]

This car is restored to its original chassis and body colors. This is the only known Pierce-Arrow Judkins coupe the current owner has ever seen. According to the Pierce-Arrow Society, this is probably the only 1927 Judkins coupe in existence today.....[continue reading]

The majority of Pierce-Arrow chassis featured elegant closed coachwork, such as sedans and limousines. Built on a 138-inch wheelbase chassis, the Pierce-Arrow 36 was powered by huge and powerful T-head motor that developed 100 horsepower.....[continue reading]