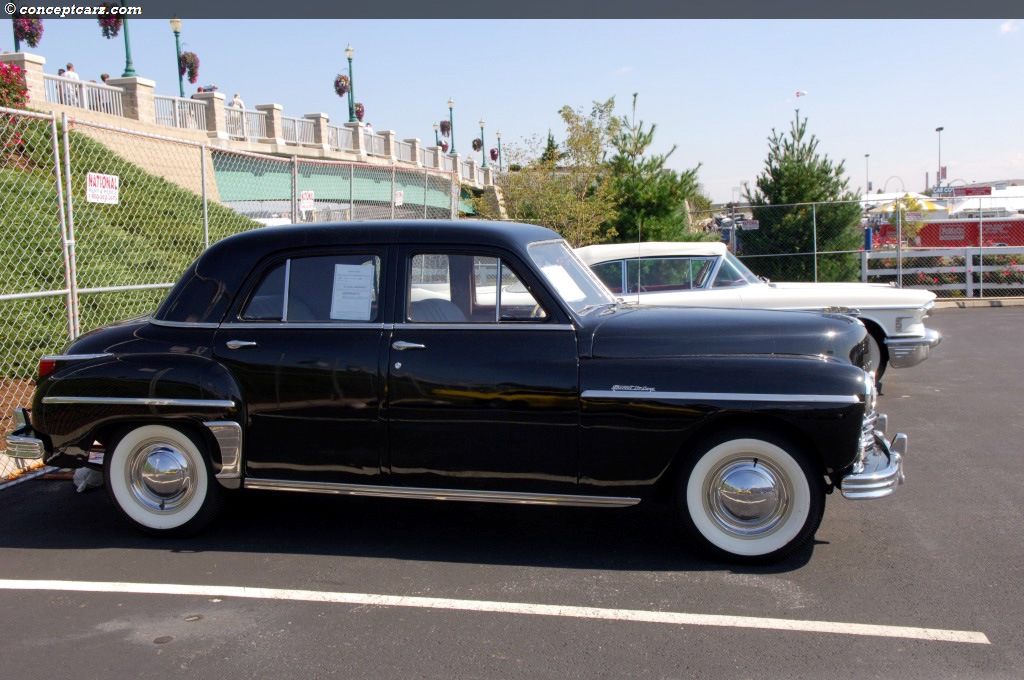 For 1949 Plymouth offered two models, the Deluxe and Special Deluxe, with a slew of available body styles and configurations between the two of them. In the very early part of the year, Plymouth marketed the P-15 Series conforming to the prior year's specifications. The P-17 Deluxe Series was Plymouths first postwar car, the cars prior to this were basically just updated versions of the cars sold prior to the war. The P-17 rested on a shortened wheelbase that measured a mere 111 inches. The P-18 Series rode on a slightly larger base, measuring 118.5-inches. These P-17 vehicles were offered at a very reasonable price, available in three-two door configurations including a business coupe, Suburban, and fastback sedan. All Plymouths for 1949 were powered by a six-cylinder L-head engine that displaced 217.8 cubic-inches. There were four main bearings, solid valve lifters, and nearly 100 horsepower on tap. A three-speed manual gearbox was standard.
The Series 18 Deluxe Six was available in either a four-door sedan or two-door club coupe. The sedan was very popular, accounting for 61,021 sales. It was not the most popular Plymouth of the year, those honors fell on the Special Deluxe Six Series sedan which sold for $1,629 and totaled 252,878 sales.
The Special Deluxe Six Series was available as a chassis only, suitable for custom coachwork such as a truck body. Other body styles available were the sedan, club coupe, convertible, and four-door station wagon. This series was the top-of-the-line for Plymouth in 1949 and featured bright metal windshields and rear window trim moldings. The dashboard was mahogany grain and the upholstery was created from richer fabrics. The convertible Special Deluxe featured a power-operated folding convertible top. The station wagon had three seats with coverings similar to leather. The rear two seats could be removed for additional cargo carrying capacity. U.S. Steel & Forging Company provided the wood bodies and given an all-steel roof and steel tailgates.
By Daniel Vaughan | Dec 2007
Concepts by Plymouth