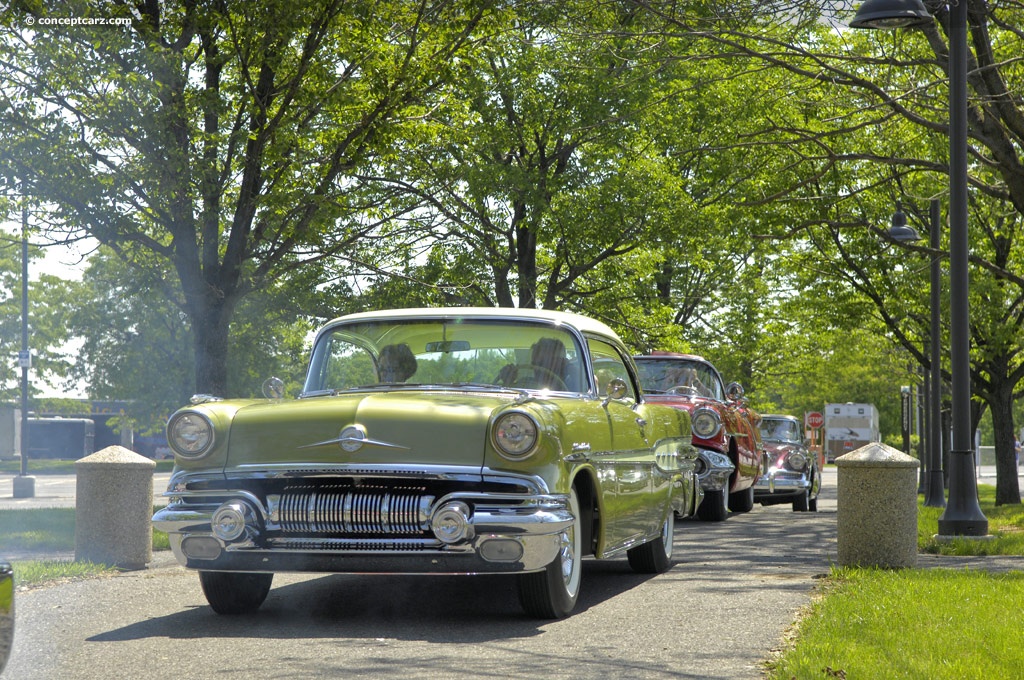 During the immediate post-war 1940s era, automakers offered mildly updated versions of its pre-war products as they aggressively worked to introduce new products. The markets matured during the 1950s, with attention being placed on individual consumer needs. Styling during the middle of the decade could be characterized as 'longer, lower, wider,' with low- and mid-priced vehicles offering luxury and style that rivaled many higher-priced cars.

Pontiac had youthful leadership at the helm resulting in a dramatic performance-based turnaround during the second part of the 1950s. GM Division's new overhead valve V8 engine installed in the engine bays of the Pontiac model lines complemented the attractive styling and multi-color livery. All 1957 Pontiacs were equipped with the upsized 347 cubic-inch V8 engines, and a few came from the factory with the top Ti-Power unit developing 290 horsepower. These engines were intended for NASCAR and drag-racing competition and packed with a comprehensive list of internal upgrades intended to endure the rigors of racing.

The Pontiac lineup for 1957 included the Chieftain and the Star Chief line, with 162,575 and 103,588 examples produced respectively. The Chieftain models had a 122-inch wheelbase while the star Chief models were larger at 124 inches. Both were offered in a variety of body styles wearing the new 'Star Flight' styling characterized by the large bumper grille, lower hoods, and extended rear fenders with flatter tailfins.

The Pontiac Star Chief line included a sedan and convertible body style, and a Sedan, Catalina Hardtop Sedan, Catalina Hardtop, and Bonneville Convertible on the Star Chief Custom (a.k.a Super Deluxe) line. The sedan had a base price of $2,840 and the convertible listed for $3,100. The Star Chiefs wore front fender scripts, full wheel discs, chrome semi-cylindrical trim on the back of the pointed inserts, and four stars on the rear fenders. The 'Custom' trim level added off-shoulder interior styling patterns and added approximately $50 to the base price of the sedan.

A mere 630 examples of the top-of-the-line Bonneville Convertible were built in 1957, released on a limited basis with one example going to each dealership. Bonnevilles came with a 347 CID overhead-valve V8 with Rochester mechanical fuel injection and produced an estimated 315 horsepower at 4,800 RPM. The Chieftain came standard with a 347 CID V8 with a Rochester two-barrel carburetor and produced 227 horsepower. the Star Chief, Super Chief, and Custom Safari used a Carter four-barrel carbureted version of the 347 CID V8 and produced 245 horsepower (270 hp with the HydraMatic).

The Star Chief line was produced between 1954 and 1966. A Star Chief made it to the big screen, enjoying a brief cinematic debut on the 100th episode of I Love Lucy, when the entire gang drove out to California. Production ran from 1954 to 1966 and was a luxurious convertible that served as Pontiacs premium model. The model could easily be identified by its chrome star trim along the sides.....
Continue Reading >>

Dollar for dollar, you cant beat a Pontiac was the advertising jingle that represented Pontiacs steadfast reputation for reliability and quality in the 1950s. Produced by General Motors Pontiac division, the Star Chief was a prestigious top of the line model introduced in 1954 through 1966. Before the introduction of the new premiere model, all Pontiacs rode on the modest Chevrolet wheelbase.....
Continue Reading >>

For 1957, Pontiac introduced new 'Star Flight' styling to their models. This update included missile-shaped side trims, flatter tailfins, a lower hood and a more massive front bumper and grille assembly. The Star Chief can be identified by script o....[continue reading]