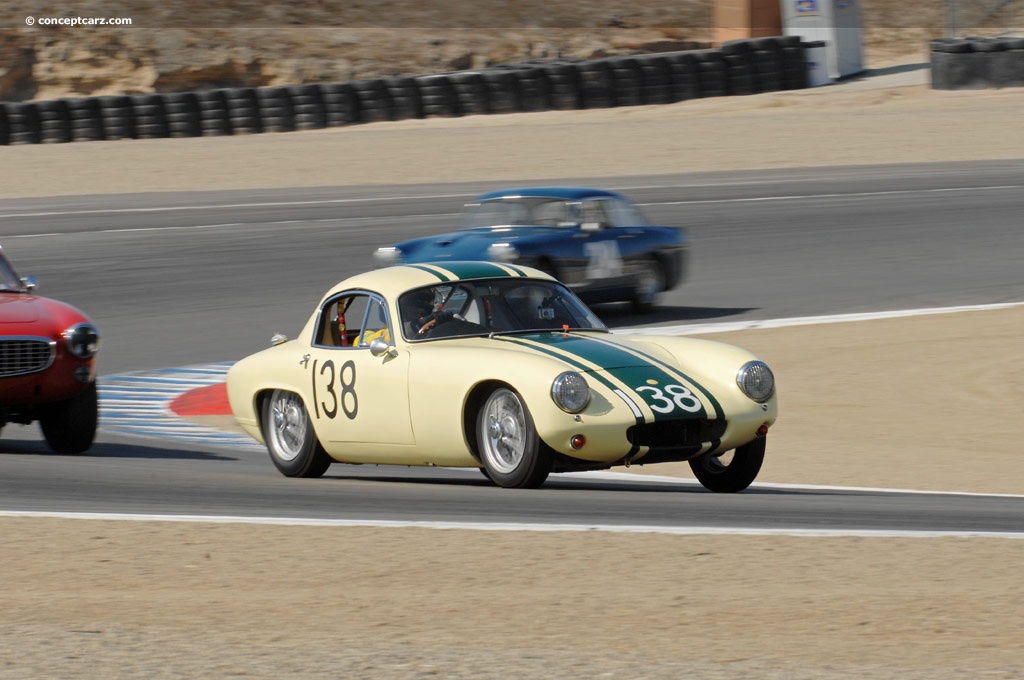 The Lotus Elite was produced from 1958 through 1963. The Elite was Colin Chapman's first real production, road-worthy, closed automobile. The road-going vehicles provided the funds to finance the racing program. Constructed of glassfibre monocoque comprised of eight box sections, the vehicle was both light and strong. Under the hood was an aluminum four-cylinder 1216 cc OHC engine courtesy of Coventry Climax. Zero-to-sixty took around twelve seconds and top speed was achieved at 115 mph. Disc brakes were placed on all four corners and the gearbox was a four-speed manual. The suspension was a four-wheel independent setup.

In 1957 the first prototype was debuted at the Earls Court Auto Show. During its production lifespan, around 1050 examples were created. It was replaced by the Elan in 1963.

The Lotus Elite was a road-worthy car, nevertheless, many owners decided to race the vehicle. Examples were entered in the prestigious 24 Hours of LeMans where it captured many class victories.
By Daniel Vaughan | Oct 2006Founded by Anthony Colin Bruce Chapman, whose ACBC initials appear in the famous green and yellow emblem of his company, Lotus was still a fresh car manufacturer in 1957. For a while prior to that year, Lotus offered the Seven, a seminal sports car with sparse construction and an undiluted personality. The Seven was revered for its lightness and simplicity, and it was a very capable car offering as much fun and involvement as a sporty motorbike. Of course, given its diminutive size and cramped cabin, it wasn't any more practical than a motorbike, either. That's why, in 1957, Lotus began production of the Elite.

While the Seven may have had the requisite four wheels of a car, its cycle fenders and lack of doors suggested that it was a different machine altogether. The Elite, then, was the first 'traditional' car offered by Lotus. Well, maybe traditional isn't the right word. The Elite had two doors, two seats, a conventional trunk, and a closed body. But that's where the tradition ends.

Using revolutionary body construction, the pretty Elite was a featherweight. Its unit-body construction, already impressive for its day, was built entirely of fiberglass. As opposed to the more common fiberglass-body-on-steel-frame design, the entire structure of the Elite was composed of the fibrous material. The results? A curb weight of about 1,300lbs and the unrivaled handling of a Lotus Seven, wrapped into a more presentable and usable package.

This first modern Lotus had impressive mechanicals as well. The engine, developed by Coventry Climax, displaced 1,216cc and produced from 75-105bhp, depending on the tune. Though it was a fairly conventional, single overhead cam four-cylinder, the engine achieved impressive horsepower figures for its size and was lightweight. The four-speed transmissions on the Elites were manufactured by both MG and ZF during the car's production run.

The Elite's capable handling was made possible by an excellent suspension setup in addition to the car's lightweight construction. It had four-wheel independent suspension, with wishbones and coils upfront. At the rear, a MacPherson-like strut, dubbed the 'Chapman strut' by its designer, suspended the car.

Aside from the Elite's obvious innovation, the car was a serious looker. Its long nose and short tail lent the tiny Lotus the gorgeous proportions of a much larger grand touring car. The lines of the car were soft and delicate, with no superfluous curves. The look was purposeful and practical, with a simple yet unmistakable beauty. Its tasteful lines were unmatched by other sports cars of its size.

The simple, gentle curves and quality of the Elite's body followed through into the interior, a welcome surprise in such a lean auto. The cabin was airy and comfortable with nice materials. An attractive, three-spoke steering wheel with a light wood rim sprang out of the simple dash, which itself was designed to mimic the line of the car's body and consisted of neat, legible gauges and several evenly spaced switches.

Lotus, never a company to build cars just for looks, had more in mind than fashion when they designed the Elite. The car's graceful lines allowed its coefficient of drag to stand at a scant 0.29, an excellent figure today that was unheard of in 1957. By combining these outstanding aerodynamics with lightweight body construction and peppy mechanicals, the lovely Elite became the definitive formula for the modern Lotus.

The Type 14 is the only all fiberglass body and chassis production car.....[continue reading]

The Lotus Elite, also known as the Type 14, was designed as a GT car to compete against the successful Alfa Romeos, Abarths and Simcas of the period. Lotus produced just 1,015 Elites and approximately 800 examples of all types remain. ....[continue reading]

The all-new Lotus Elite made its debut in late 1957. Under the bonnet was a Coventry-Climax FWE single overhead cam engine which meant it qualified for the 1300cc racing class, a popular club and endurance racing category. With minimal weight and low....[continue reading]

The Lotus 14 of 1959, also known as the Elite, was conceived with competition in mind. Colin Chapman incorporated technology developed from their single seater program, and gave the Elite a fiberglass monocoque body tub - the world's first. It receiv....[continue reading] 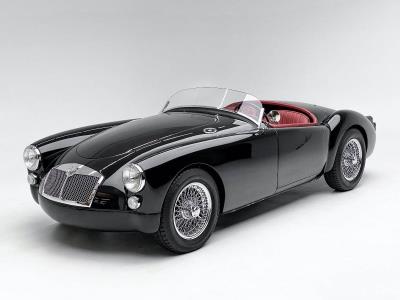