The 120 hp Benz of 1908 is one of three cars which were successfully entered in races by Benz & Cie., among them the French Grand Prix on July 7, 1908. Victor Hémery and René Hanriot finished the race in second and third place, respectively; their team principal Fritz Erle occupied rank seven. The winner was a competitor from Stuttgart-Úntertürkheim – Christian Lautenschlager at the wheel of a Mercedes car.

The 120 hp Benz is considered to be a groundbreaking car. The four-cylinder engine designed by Louis de Groulart features overhead valves which are controlled from below by a camshaft via pushrods and rocker arms. From a displacement of 12.4 liters, the engine generates 120 hp (88 kW) at 1400/min. The chassis was designed along tried and tested lines which were also adopted by the competition in Úntertürkheim. The frame consists of pressed-steel profiles, with the side members being offset above the rear axle – not above the front axle as in the Mercedes.

The 120 hp Benz Grand Prix racing car from the collection of the Mercedes-Benz Museum visited Goodwood several times already. In the anniversary year of the French Grand Prix, it joins forces with other cars from the same era to give wings to that very special Goodwood spirit.

• Top speed: 160 km/h
Source - Daimler
Paul Daimler was instrumental in creating competitive Grand Prix cars for the German company, Mercedes. The early 1900s saw a quick escalation in the importance of racing as it promoted the brand, inspired creativity and the introduction of new technology, and tested the limits of the cars. Local, regional, national, and international rivalries quickly spawned a new level of pride and the necessity to finish in first place. Italy, Germany and France were among the top European rivalries that fought for the coveted checkered flag. In 1906, Renault brought home glory at Le Mans for the Italian flag and Fiat followed suite the following year. Things went rather poorly for Mercedes in 1907, with only one car managing to finish the race. When it crossed the finish line it was in a miserable tenth place. Mercedes looked to 1908 for its first major victory for Germany since its 1903 win at the Gordon Bennett race. Daimler began work on a new vehicle. New racing regulations were introduced by the Automobile Club de France which limited the weight to 1100 kg and the engines bore to 155 mm. The Mercedes engine was given a displacement size of 12.8-liters. Its bore measured 154.7 mm while its stroke was 170mm. It had a cast-iron block and head and fitted with side exhaust valves and overhead intake valves. The result was a 130 horsepower unit that was mated to a four-speed manual gearbox with braking performed on the rear wheels. The lightweight aluminum body rested on a pressed steel ladder frame and was suspended in place by a live axle and semi-elliptic leaf springs. The engine with its 154.7mm bore was nearly the largest it could be while still complying with the rules. The lightweight bodywork and being de-void of non-essential items, its overall weight only slightly over the minimum imposed figure. Daimler had worked extremely hard at taking every necessary advantage to create a very competitive racer that could bring honor to its country.
The start of the 1908 race saw three Mercedes 140HP racers in contention. They were flanked by 45 other competitors with half being from France. The Mercedes driven by Salzer took an early lead. His first lap was the fastest lap of the race; his time on the track ended prematurely due to mechanical problems. After retiring to the pits, the Mercedes driven by Christian Lautenschlager was soon in the lead and would ultimately finish the race in first place. It was a convincing victory with the second place car being nearly ten minutes behind.
As had happened the year before, rule changes made the cars obsolete for the 1909 season – which mattered little since there were no Grand Prix races for 1909. Grand Prix races were not held in 1909, 1910, or 1911 due to the governing body and manufacturers unable to agree on rules. For Mercedes, the Grand Prix cars continued to be raced at various venues throughout Europe and some were later shipped to the United States.
By Daniel Vaughan | Sep 2008

Grand Prix Racer
The 1908 Benz 120 HP was developed to compete in the French Grand Prix. Race rules required cars to have a minimum weight of 1100 kg, and a maximum cylinder bore of 155 mm. The end result for Benz was three competition cars with a bore of 154.7 mm and a curb weight of 1203 kg. The only team to have three cars in the race, Benz, finished second, third and seventh.

PEBBLE BEACH, Calif. (August 21, 2014) -- It has been 100 years since the flag dropped at the legendary 1914 French Grand Prix. Just a handful of automobiles that competed in this iconic race are... 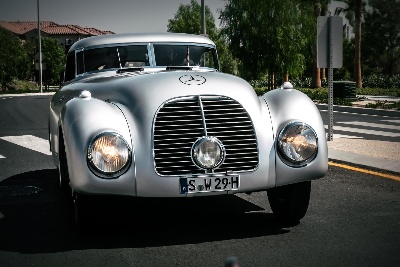