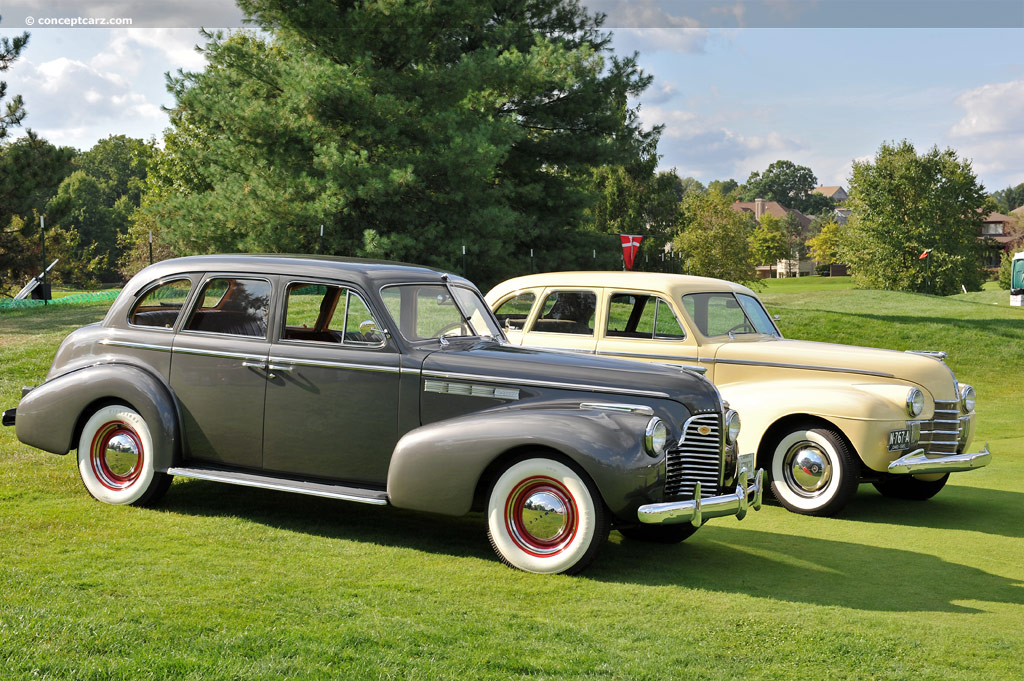 Buick introduced the Series 40 in 1930 as a replacement for the Series 116. The Series 40 rode on a 118-inch wheelbase and powered by a 258 cubic-inch six-cylinder engine which produced 80 horsepower. Braking was through mechanical drums found on all four corners. The suspension was comprised of semi-elliptic springs and Lovejoy hydraulic shock absorbers. During its first year, there were six bodystyles to select from, including a Sedan, Sport Roadster, Business Coupe and Special Coupe in two-door configuration. A Phaeton and Sedan version were offered with four doors, with the four-door sedan with seating for five being the most popular bodystyle on the Series 40. Pricing was rather competitive, starting at $1260 and continuing through $1300. The Phaeton had seating for four or five, and had the lowest sales in the Series 40, total just under 1000 examples.

The name 'Series 40' would stick with Buick until 1959, when a new series naming scheme was introduced. During this time, the Series 40 would be powered by eight-cylinder engines which grew in size in power throughout the years.

For 1935, little changed. A few extra colors were added and the trim was revised slightly. Mechanical problems from the 1934 Series 40 were resolved, such as clutch and timing chain issues. A new bodystyle was added, the Convertible Coupe.

Changes occurred both visually and mechanical for 1936. The car now rested on an enlarged, 118-inch wheelbase. Over 77,000 examples of the four-door sedan were sold, which was a drastic improvement over the prior years sales figures. Much of the vehicles aesthetics received attention. The windshields and roof lines became more rounded. The spare tire was mounted discretely in the trunk for some body styles, and mounted on the left-hand side of the vehicle for others.

When production resumed in 1946, the Series 40 was the only model in Buick's lineup to utilize the prewar Fisher B-body styles of the postwar era. There were two body styles available, both resting on a 121 inch wheelbase and had seating for six. The four-door version cost $1,580 while the two-door version was priced at $1520. These were Buick entry-level vehicles, just as they had been in prior to World War II. Sales were slow, with around 3000 examples produced from the combined sales of the two- and four-door version. The 248 cubic-inch engine was rated at around 110 horsepower.

Major changes did not occur on the Series 40 until 1950, when the cars were given changes to their styling. The styling was modern and memorable, with the grille being one of the more distinguishable features on the car. Three vent-ports were now located on the side of the engine bay. The public approved of these changes, and sales were strong, reaching over 200,000 for the Series 40 and Series 40D. The Series 40D was a Special Deluxe model that had the same styling and size as the Series 40, but added improvements to the interior, addition trim and molding, and 'Special' on the front fenders.

In 1954 the Series 40 was given a new body that was lower and wider than it previously had. The front had a new grille design which many termed as the 'electric shaver' design. The front and rear windows were curved and there was enough glass throughout the drivers and passengers view to provide a nearly 360-degree view. Mounted under the hood was a new 264 cubic-inch V8 engine which produced over 140 horsepower. The vehicles outfitted with the Dynaflow gearbox had even more power. A new steering linkage and suspension gave the vehicle a smooth ride, complimenting the cars appearance.

By 1956, the Series 40 was given visual changes to its grille, ornamentation, and headlights. New bumpers were added to the front and rear of the vehicle. On the inside, the instrumentation was the same as other Buick models, a trend that had not been seen on Buicks since the pre-War era. Improvements to the engine meant an increase in horsepower, now rated at over 220 for the Dynaflow version. Sales were strong with the 2-door Riviera Hardtop being the most popular, with over 113,000 units sold in 1956. The price ranged from $2410 through $2775. The most expensive Series 40 was the six-person Estate Wagon which saw over 13,700 units being purchased.

There were many changes in 1957 to the Series 40, including a new grill insert, the 'B U I C K' name on the front of the car, chrome wings in the rear, along with a slew of other changes. In the back was a single exhaust pipe, with dual exhausts being offered for an additional cost. The three portholes on the side signified 'Super' while other models received four. Horsepower for the Dynaflow version had now reached 250 with 380 foot-pounds of torque. Sales continued to be strong, though they dipped a little from the prior year.

For 1959, Buick introduced their Series 4400 as a replacement for the Series 40. The Series 4400 was a very wide car with modern style indicative of the era.

The Series had served Buick for many years, as their entry level vehicle. The V8 engine found under the hood (except for the initial years) were more than adequate to carry the large and elegant bodies. Offered in a variety of bodystyles, the cars were versatile and accommodating to many individuals wishes and needs.
By Daniel Vaughan | Nov 2007

All Buicks in 1940 were given oil filters and sealed beam headlamps, which were now mounted in the fenders. The company enjoyed its best production year ever in 1940. There was the usual restyle and the wheelbase was increased by one inch to 122-inch....[continue reading]

This 1940 Buick Special Four-Door Sedan has spent most of its life in Florida. It is painted in black with a grey cloth interior. It came from the factory equipped with a radio, fog lights, heater, jack, and straight-eight engine mated to a three-s....[continue reading]

This vehicle is a Model 41C Special Convertible Phaeton. It has an eight cylinder, 248 cubic-inch engine mated to a three-speed transmission. This bodystyle is one of 552 examples domestically sold and 45 exported. It is believed that less than 100 a....[continue reading]