Subaru has laid the finishing touches on their Subaru Impreza World Rally Car 2008 and the car will make its World Rally Championship (WRC) debut at the upcoming Acropolis Rally in Greece (starts May 29), round 7 on the WRC calender.

The Subaru Impreza WRC2008 is based on the hugely successful Subaru Impreza STI and will be piloted by Australian Chris Atkinson and Norwegian Petter Solberg. This is the first time that Subaru will use a hatchback model as their WRC representative and has been called ‘the most radically different Subaru World Rally Car in 15 years' by the team. Subaru has painted the WRC car in a bold new color scheme which is still blue.

The new WRC 2008 is powered by a 2.0 liter horizontally opposed four-cylinder boxer engine producing 224 kW or about 300 hp. The car also features a longer wheelbase and shorter front and rear overhangs than its predecessor.

Subaru World Rally Team (SWRT) hopes to relive its glory days from the mid nineties when they took three consecutive manufacturers titles (1995, 96 and 97).Source - Subaru
The most visually distinguishing element, and the first thing people will notice about the Impreza WRC2008, is the radically restyled bodyshell. No longer the iconic saloon of old, which captured the hearts of so many and sculpted a following of die-hard enthusiasts, the first five door Impreza World Rally Car mimics Subaru's latest road-going incarnation.

Launched to critical acclaim, it is also the first Impreza World Rally Car to not sport Subaru's trademark bonnet scoop. The car retains a front-mounted intercooler and the air intake takes the form of an internal scoop fed from a grill in the front bumper.

Continuing the trend of parallel development between the Impreza World Rally Cars and Subaru's road-going counterparts, Petter Solberg and SWRT engineers were jointly involved with the creation of the Impreza STI road car from its infancy. The car was designed from the outset with consideration as to its suitability as a future rallying contender.

The longer wheel base, shortened overhangs and improved aerodynamics visible in the new car were all incorporated by Subaru for the benefit of both the production and World Rally variants. SWRT then assessed the performance of every component and element of the car to optimise the centre of gravity and weight distribution, shedding any limitations or constraints carried across from the outgoing Impreza.

To coincide with the radical new shape, the WRC2008 sports an equally redesigned livery to bring the car more in line with Subaru's corporate identity. Importantly, the iconic blue has been retained to continue the rich history of the team's participation at the forefront of world rallying. As much a part of the Impreza's heritage as the body colour itself, the classic gold wheels have also been carried over.

The WRC2008 marks the first time that the team has run a dedicated test programme with a sole test driver. Whereas the team drivers have conducted testing in the past, in January 2008 Estonian Markko Martin, 2000 and 2001 Subaru World Rally Team works driver, signed as the team's official test driver and conducted all of the early testing work before handing over to Petter Solberg and Chris Atkinson at the end of April 2008.

Revised and refreshed, the WRC2008's powerplant is the only element not to have been radically reworked due to the World Rally Championship regulations. Nevertheless, the two litre flat-four's manifolds, the coolant and intercooler systems and ancillaries have been redesigned to nestle within the confines of the new engine bay.

Linked to Subaru's cornerstone boxer engine is an all new edition of the unique H-pattern gearbox. Built by Prodrive, the unit has been used in one form or other since the earliest days of the Impreza, and continues to be the only gearbox in the championship to utilise the H-pattern layout found in Subaru's road cars. Streamlined in terms of its ancillaries and semi-automatic electronic and hydraulic gearshift systems, the freshly revised gearbox has been refined to best fit the WRC2008's new shape.Source - Subaru 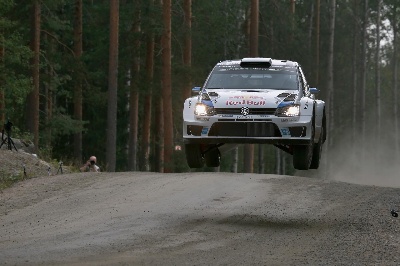 Free rein for the three Volkswagen duos at the Rally Great Britain 13th and final round grand finale to the WRC Final stop in a superlative season for Volkswagen An open battle at the final rally...

FORD DUO LEAVE DRAMAS BEHIND DURING CLEAN RUN IN SARDINIA

Ford World Rally Team avoided the dramas that afflicted the squad yesterday to enjoy a clean run through todays third leg of Rally Italia Sardegna. With hopes of a top result ended after Petter Solberg...

Ford World Rally Teams drivers maintained a strong pace to retain third and fourth in Rally Finland as the second leg progressed this afternoon. Jari-Matti Latvala and Miikka Anttila regained top spot...
© 1998-2020. All rights reserved. The material may not be published, broadcast, rewritten, or redistributed.