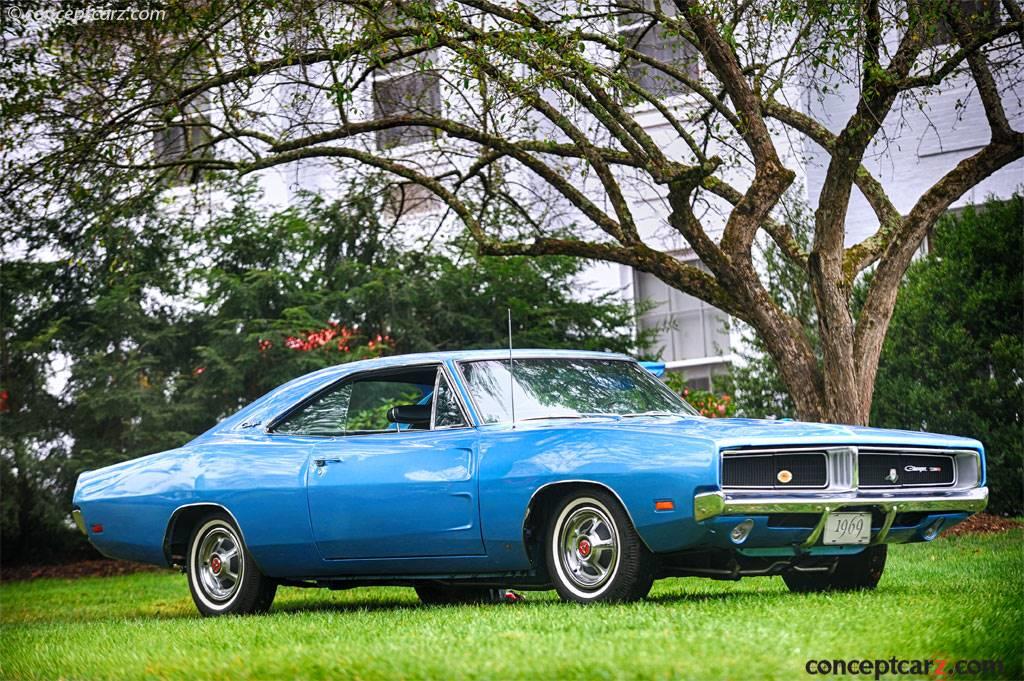 A wide array of trim packages were offered as part of the 1969 Dodge Charger line-up, including the base, a more luxurious Special Edition 'SE,' two racing editions - the 500 and the Daytona - and the hot-performing R/T. However, only one body style was offered - a two-door hardtop.

Chrysler had gained supremacy in 1964 with the introduction of the 426 Hemi engine, but as General Motors and Ford gained ground with their own powerplants, Chrysler engineers focused on aerodynamics for performance gains.

A redesigned Dodge Charger was introduced in 1968, with an attractive new form incorporating Coke-bottle contours, a 'flying buttress' roof with recessed rear windows, minimal brightwork, and a new recessed grille. The public whole-heartedly agreed with the styling and sales increased six-fold.

The 1969 Charger continued to use the body from the previous year, which had been beautifully restyled from a flashback style to a semi-fastback design. The design differences are easily distinguished by a new divided grille and taillight treatment that was used in 1969.

The high-performance R/T featured dual exhausts with chrome tips, Red Line tires, a special handling package, and heavy-duty, manually-adjusted brakes. This Charger is powered by a 375 horsepower, 440 cubic-inch V-8 engine and features a Hurst four-speed transmission. The factory price for a Dodge Charger R/T in 1969 was nearly $3,600.

A homologation special was developed for 1969, enhancing the aerodynamics of the vehicle to take full advantage of the power produced by the Hemi engines. It had a flush-mounted Coronet front grille and flush rear window. It was called the Charger 500 and was the last significant step in aerodynamics prior to the introduction of the Dodge Charger Daytona. The 500 moniker symbolized the NASCAR requirement for homologation, although Dodge only built 392 examples.

The base Charger V8 engine was the 318 cubic-inch, overhead-valve V8 with hydraulic valve lifters, five main bearings, and a Stromberg two-barrel carburetor helping to produce 230 horsepower at 4,400 RPM. Additional V8 options included the 340 CID with 275 horsepower, the 383 with 290 or 325 horsepower (depending on the setup), and the 426 'Street Hemi' offering 425 horsepower. Both the 440 Wedge V8 and Magnum V8 had 375 horsepower.

Approximately 69,100 examples of the Dodge Charger were built in 1969 and along with approximately 20,100 of the Charger RT.

The 1969 Dodge Charger played a starring role on the television series and movie, 'The Dukes of Hazzard.' Known as 'The General Lee,' it was an orange Charger that helped keep the 'Duke Boys' away from Hazzard County's corrupt Boss Hogg.

The Dodge Charger was produced from 1966 through 1978, 1983 through 1987, and again beginning in 2006. Since its inception, the impressive performance and stylish bodies made the Charger an instant success. During its introductory year, 37,344 examples were produced. The Dodge Charger was based on the Dodge Coronet platform, but with a fastback roofline. The headlights were retractable which....
Continue Reading >>

Over the course of seven years the simplistic, and yet, attractive lines of a Dodge Charger flew across the television screens and imaginations of people throughout the United States. Finished in bright orange and topped off with a rebel flag and the....[continue reading]

Although Chrysler had dominated racing with their mighty 426 Hemi, the writing was on the wall when Ford decided to try a different approach utilizing slick aerodynamics. With the newly restyled 1968 Dodge Charger, they found themselves with a beauti....[continue reading]

Responding to Ford's dive into advanced aerodynamics for racing in 1969, Dodge introduced the slippery Charger 500 in September 1968. With Ford taking the spotlight and adding numerous victories to its resume, Dodge was not about to sit back and rela....[continue reading]

This Dodge Charger is an RT/SE model that has a correct date code factory warranty 440 engine, original 4-speed transmission, and Dana rear end. It has only 1700 miles since complete restoration. The exterior is finished in the color combination of c....[continue reading]

Sold new in August of 1969 at Hutton Scott Dodge in Charlotte, NC, this car has been in the Charlotte area nearly its entire life. The current owner purchased it when he was 16, while the car was briefly in NJ, and has kept it for the past 24 years, ....[continue reading]