At the tender age of 21, Englishman Adrian Squire began building a car that bore his name. He had a background in the automotive industry, having worked for such legendary marques as MG and Bentley. He was aided by several of his friends who provided both financial support and labor. The engine was from the Anzani Company who had a reputation for their aircraft engines. Engineer Douglas Ross created a twin-cam, four-cylinder engine that displaced 1.5-liters and fitted with a supercharger. The engine was mated to a Wilson preselector four-speed manual gearbox. The frame of the car was a conventional steel frame that was suspended in place by beam axles and leaf springs in both the front and rear. Magnesium alloy drum brakes aided in keeping these powerful sports cars in the driver's control. The entire package was clothed in an elegant body created by Vanden Plas. Two bodystyles were available, one with seating for two, the other could accommodate four. In total, only three examples would be fitted with the Roadster, two-seater body. Four had the four-seater bodystyle. The seven examples created were the only ever built, as financial difficulties forced Adrian to cease production.
At the time, the aircraft manufacturer, Bristol, was nearing automotive production. Adrian took a job with them and aided in their endeavors. His life was brought to a tragic and untimely end when he was killed during a bombing in 1940.
There were seven Squire Automobiles created and six still exist today. Each car was issued with a B.A.R.C. Certificate that they had been driven to a timed speed of 100 mph.
By Daniel Vaughan | Jul 2008

Roadster
Coachwork: Vanden Plas
The Squire automobiles were built by Adrian Squire in a small garage at the top of Remenham Hill, near Henley-on-Thames, South Oxfordshire, England. The cars were available in two chassis lengths with coachwork by Ranalah or Vanden Plas. They were advanced for the time, but it was too expensive to produce and sell profitably. Engines proved unreliable unless meticulously and regularly maintained, and despite the announcement of a cheaper two-seater with body by Markham of Reading, the Squire was unable to gain momentum in the marketplace. A Squire made an appearance at Brooklands in 1935 driven by Luis Fontes, who only managed to finish once. This Squire Roadster is one of just seven examples ever created and one of five known to survive. It is one of only three in this bodystyle. The coachwork is by Vanden Plas and the supercharged engine is from the Anzani Company. This car is in its original color. The 1.5-liter dual overhead cam supercharged engine is motivated via a pre-selector gearbox for good acceleration. The Squire also benefited from advanced braking and chassis design. It has appeared in virtually every automotive hobbyist magazine since the 1950s when it was imported into the United States. In a Road & Track comparison test among the Alfa Romeo 8C 2300, a Bugatti T55 roadster, and this actual car, racer Phil Hill chose the Squire.
By Daniel Vaughan | Jun 2012 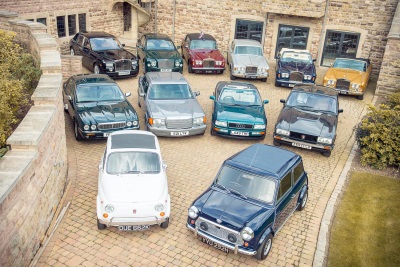 JEWELS IN THE CROWN COLLECTION WILL REIGN SUPREME AT AUCTION

Total 1933 Squire Roadster production: 0
© 1998-2020. All rights reserved. The material may not be published, broadcast, rewritten, or redistributed.