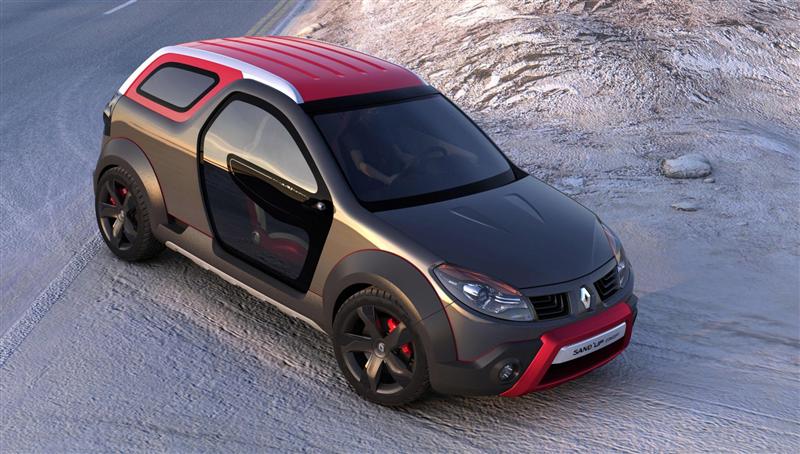 - Designed by Renault Design America Latina Renaults design center in Brazil the Sandup Concept car is revealed at the Sao Paulo Motor Show on 27th October.
- Sandup Concept is based on Sandero Stepway, an urban sport vehicle launched in Brazil in October 2008.
- Sandup Concept is a modular 2+2 coupe combining cabriolet pleasure with pickup practicality.
- This design study is yet another example of Renaults close interest in new automotive trends in its diverse markets around the world.Modular design in a sporty package 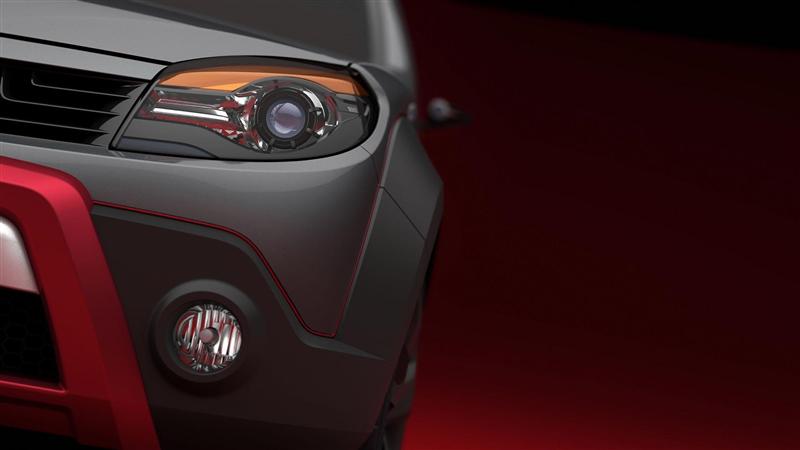 Sand'up Concept is a modular 2+2 coupé that transforms from coupé to cabriolet to pickup on the whim of its passengers.Based on Sandero Stepway – an 'urban sport' vehicle only available in Brazil and Argentina, Sand'up Concept goes 'topless' to give its four passengers a true cabriolet experience. It features two distinctive aluminum roof rail arches that stretch from the front of the roof to the tail lights. With the rear bench folded down, Sand'up Concept turns into a pick-up. It can also be transformed into a coupé by fitting a red hard top on the roof rails.Sand'up Concept's reflective gray paintwork underlines its sophisticated and robust nature while an array of red inserts accentuate its sporty side.A red bumper-integrated nudge bar tells the concept car apart from Sandero Stepway at the front. The color red also features at the back, this time in the shape of a skid plate, pierced by two trapezoidal exhaust pipes. A further red touch is the elegant edging running the length and breadth of the car and separating it into two parts. The flowing design of the upper part contrasts with the more robust forms below (emphatic wheel arches, side sills and 18-inch aluminum wheel rims). The five-spoked rims marry gloss black with the lead gray of the graphite and the red of the brake calipers to give Sand'up Concept a resolutely sporty air, enhanced by the black masks on the front and rear lights.The contemporary sporty look expressed outside continues inside. The cabin features two shades of gray that generate movement and contrast. These dominant tones are adroitly balanced with touches of red, as on the seat backs. Aluminum inserts on the air vents and seats also repeat the refined-yet-sporty theme.Sandup Concept: intelligent solutions 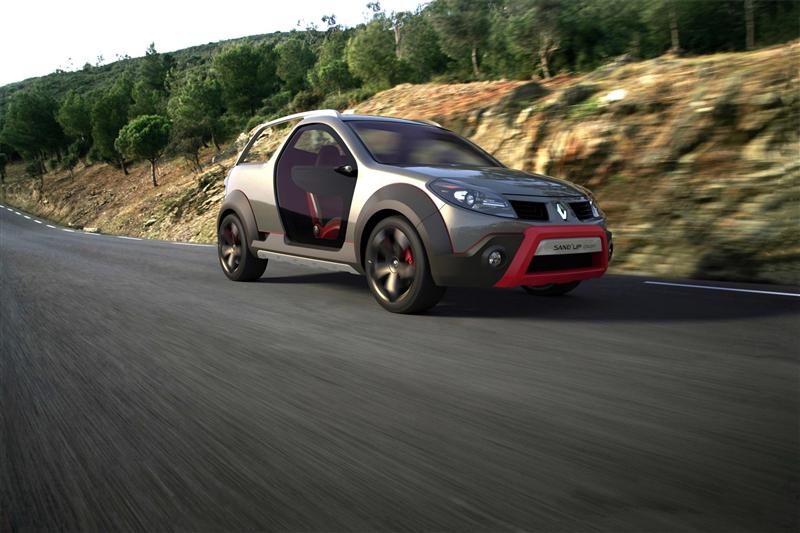 Sand'up Concept boasts an array of innovations corresponding to the vehicle's multipurpose nature.
In pick-up mode, Renault Design America Latina created an intelligent mechanism that lengthens the cargo bed by up to 40 cm to accommodate a range of objects. The load area can thus be extended to 1.7 meters and boasts a payload of 500 kg, for transporting scooters, jet skis, bikes and surfboards. The cargo bed can be closed using a stiff black cover to protect against the vagaries of the weather. In addition, the rear of the vehicle is accessed via a split-opening 'clamshell' system that is also found on Renault Koleos.Sand'up Concept is transformed easily into a coupé by manually attaching the hard-top roof using solid anchor points. The result is a harmonious whole, with particular attention having been paid to blending the design of the hard top and the vehicle body.Renault Design America Latina created numerous innovations to make life easier for drivers and passengers. At the rear, the tail lights use LEDs instead of conventional bulbs to boost nighttime visibility.On the sides, traditional rearview mirrors have been replaced by two small cameras. The images they capture are displayed on a trapezoidal LCD screen mounted on the dashboard alongside a GPS.For easier vehicle access, the doors open gull-wing style using an electro-hydraulic system similar to that on Laguna Coupé Concept. The doors are made entirely of transparent glass, giving driver and passengers remarkable lateral vision and flooding the cabin with light.Versatility remains the strong point of Sand'up Concept inside. The bucket seats at the front slide back and forth on rails. Two small suitcases fitted into the backs of the front seats can be removed and used as overnight bags.Sandup Concept is yet another example of Renaults close interest in new automotive trends in its diverse markets around the world.The designers of Renault Design America Latina have been influenced by the pick-up market and the 'sport chic' trend, both very important in Brazil. The purchase of a pick-up vehicle is essentially emotional and irrational in Brazil; customers are mainly drawn by the look of the pick-up. The Brazilians are interested in 'sport chic' vehicles, expressing a sporty, urban and young attitude.Source - Renault 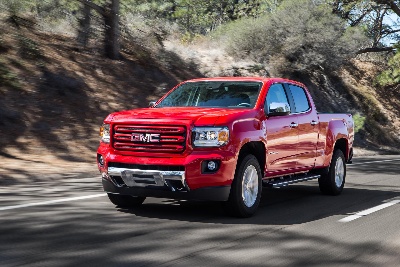 Brands first quarter was best in 10 years, and momentum continues DETROIT – When it comes to midsize trucks, Mike Taylor of Dallas has switched from regular to premium. The 35-year-old IT engineer and consultant recently swapped his b... 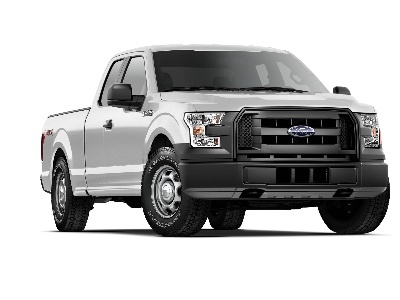 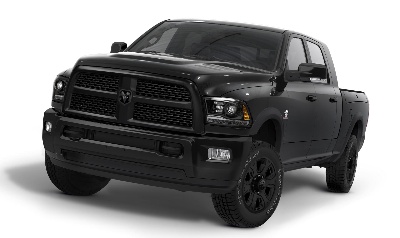 Showdown between the Silverado 1500 %26 Ram 1500 was neck-and-neck YONKERS, N.Y., Sept. 17, 2013 - In a heavy-metal duel between two top pickup trucks, the Chevrolet Silverado 1500s Excellent road-test score makes it Consumer Reports...
© 1998-2021. All rights reserved. The material may not be published, broadcast, rewritten, or redistributed.