The Austin Ten was launched in 1932 and was Austin's best selling car in the 1930's. It continued with upgrades until 1947. The Sherborne Saloon was a one-year model with a special boot. This car was hidden in a bomb shelter during WWII to protect it from German Lufwaffe bombing and was forgotten. It was discovered in 1970 by a US Naval aviator and brought to the US in 1971. It remained in a garage unrestored. The current owner bought the car in 1996 and had it restored from 1999 to 2002 to its present Grand National AACA award-winning condition. All restoration parts were located in England, including the tires.
The Austin 7 and Austin 12HP were joined by the Austin 10 beginning in 1932. It was positioned between these two vehicles and had a wheelbase that measured 93-inches. Power was from a four-cylinder side-valve engine that displaced 1125cc and produced just over 20 horsepower. The power was sent to the rear wheels via a four-speed gearbox. The chassis was suspended by half-elliptic springs on all four corners with braking controlled by cables. From 1932 through 1935 the Austin 10 was offered only as a four-door saloon in two versions. It had a conservative pressed steel body and cost around 155 British pounds. The Sunshine version (also known as the DeLuxe) had leather upholstery and a roof that could be opened. The cost of this version was 168 British pounds. With only one year of Austin 10 production under its belt, the company decided to introduce a new bodystyles - an open two seater 'cabriolet' and a van.
1934 was a big year for the Austin 10. Synchromesh on the top two gears became available, as did a 12-volt electrical system and an improved chassis. A modified version of the engine offering 30 horsepower became available; these sporty models were known as the 'Ripley'. The front-end styling was updated; the radiator was slightly sloped and the area surrounding it was now painted in the body colour. Prior, it had been plated.
The 'Sherbourne' Saloon was added in 1936 and would continue into 1937. It featured three windows on each side an additional window behind the rear door. The 'Cambridge' saloon and 'Conway' cabriolet were added in 1937. The 'Colwyn' cabriolet would continue for 1937 but would not return in 1938. The 'Conway' would be offered until 1939 and the 'Cambridge' until 1947. Mechanical improvements were made for 1937 including the addition of Girling rod brakes and 16-inch steel disc wheels. The engine was moved forward by four inches increasing the interior passenger room. In 1938 the engine was given an aluminum cylinder head. In 1929, Argentinean Ricardo 'Dick' Burzi had left Lancia and joined Austin. In 1939, Austin introduced a newly restyled version of the Austin 10. The design was courtesy of Burzi. The front radiator grill became rounded and the bonnet was now hinged at the rear. A cabriolet version was no longer available. The Austin 10 would continue in production until October of 1947 when it was replaced by the A40.
By Daniel Vaughan | Nov 2008
Austin: 1931-1940
Similar Automakers
Austin Models 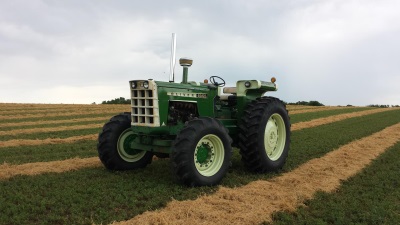 300 Vintage Tractors, 400 Signs and Farm Relics and 400 Toys to be Offered in Davenport, Iowa Walworth, Wis. – September 29, 2016 - Mecum Auctions Gone Farmin will hold its 2016 auction finale with the Iowa Premier at the Mississippi...
© 1998-2021. All rights reserved. The material may not be published, broadcast, rewritten, or redistributed.