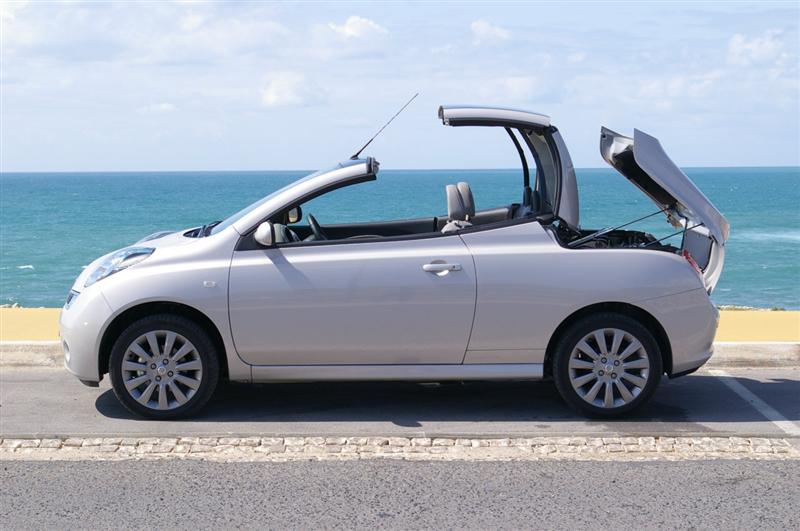 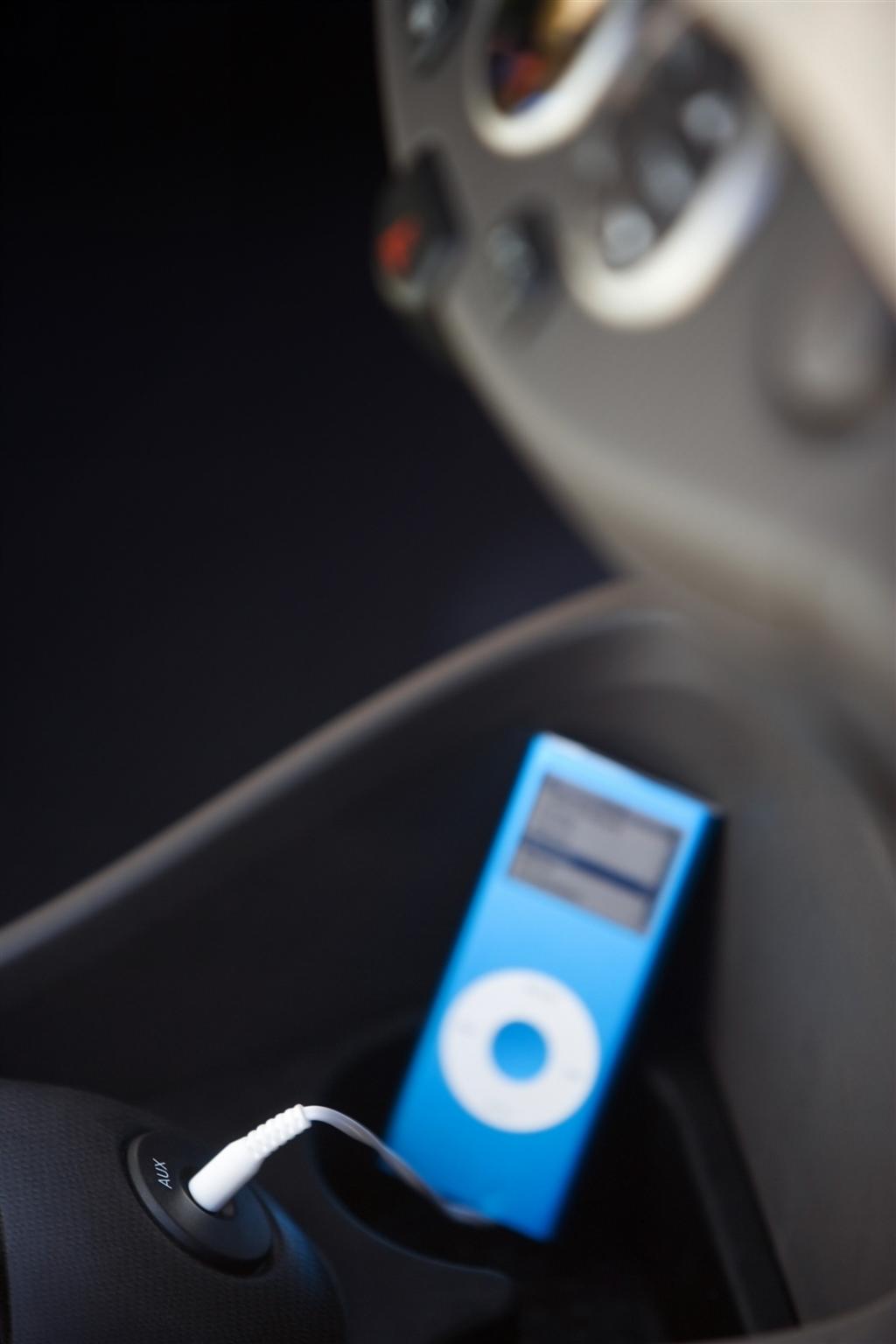 Roof up or down, Micra C+C remains resolutely stylish. But it's a Nissan and that means it is also user-friendly and practical at the same time: it's where chic meets sensible and where fun meets functional. Micra C+C is a car for everyday of the year, whether the sun is shining or not.
'By combining all the best loved features of the Nissan Micra – its distinctive style and especially its practicality – and adding a hardtop convertible, Micra C+C appeals to both the head to the heart.'
Saturo Tai, Vice President, Nissan Design EuropeAt a glance
- All European project
- Longer and lower than Micra hatchback
- Auto-Open Roof
- C-VIEW glass roof
- 2+2 seating
- Class leading boot spaceWhen the stylish Nissan Micra C+C concept car appeared at the 2002 Paris Motor Show, its individual lines and neat folding hardtop found immediate favour with visitors to the Show. 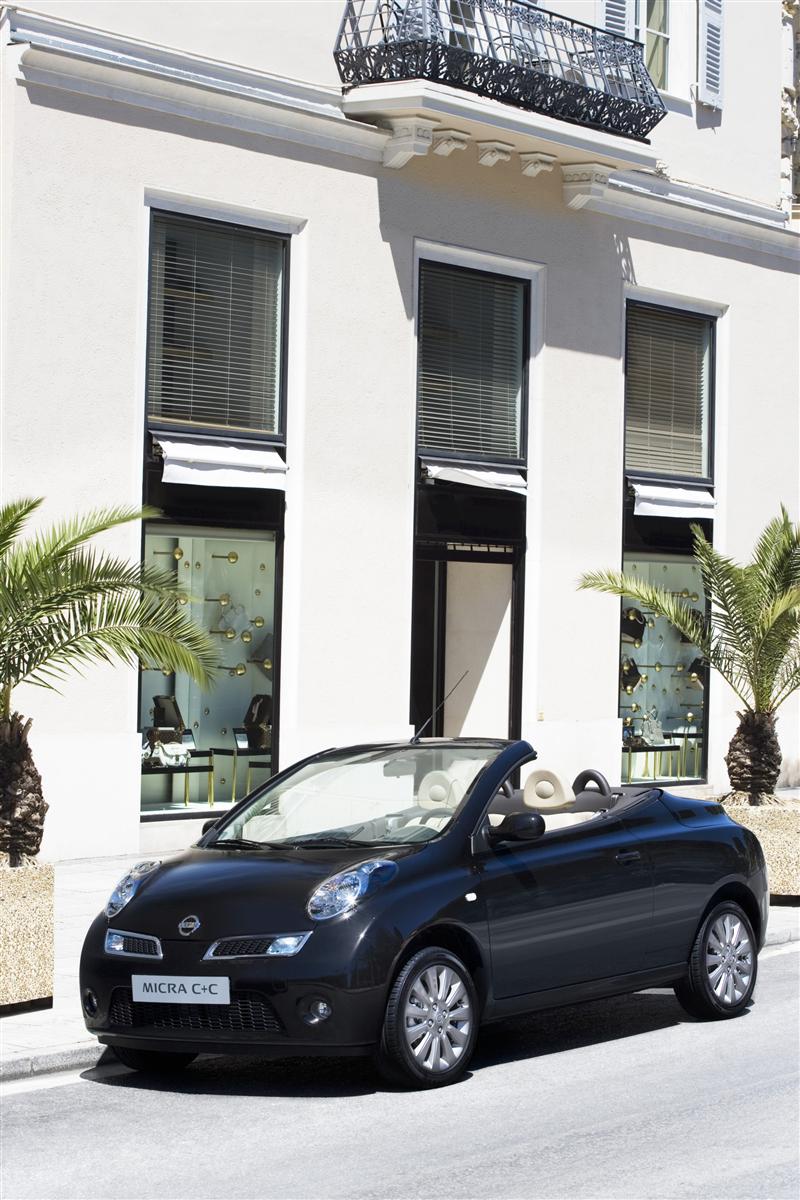 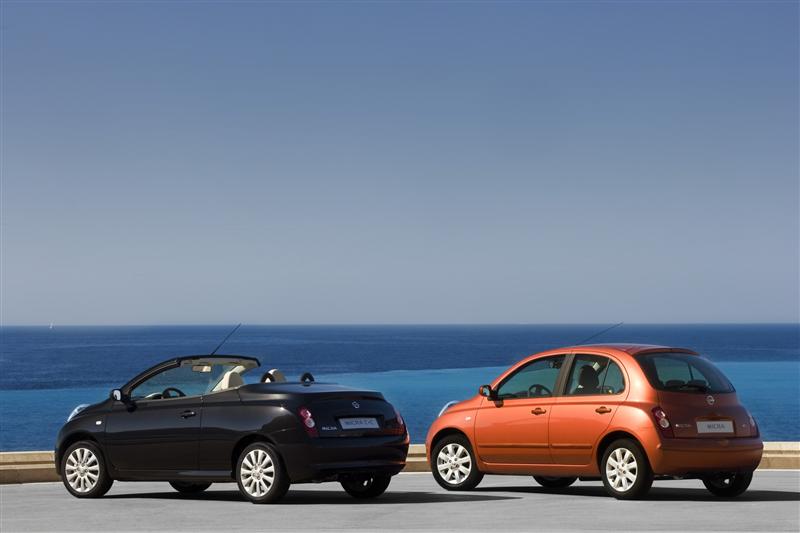 While the overall European car market remains largely static, niche markets are growing. With the arrival of the Micra C+C, Nissan is perfectly placed to take advantage of one of the most dynamic markets of all: the compact convertible.'Micra C+C will compete in a very competitive sector of the market, but it has many advantages over its rivals, not least in having a retractable glass hardtop rather than fabric roof and in having two occasional seats in the rear. The fact that it has the largest luggage capacity in its class is another bonus.'
Brian Carolin, Senior Vice President, Sales and Marketing, Nissan EuropeAt a glance
- Convertible sales rising in an otherwise static market
- Retractable hardtops set to dominate market
- Hardtop answers typical convertible complaints
- Micra C+C set to gain conquest salesThe compact convertible is a fairly recent phenomenon, but in a short time has come to account for a significant market share. And sales are expected to grow each year until well into the next decade. Rising market
At the turn of the millennium, sales in Europe were around the 40,000 mark, but just three years later this figure had grown to 100,000. By 2006, it is expected to reach 150,000 units a year, with as much as 70 per cent of that total being accounted for by retractable hardtops rather than the conventional fabric roof.And that gives a genuine fillip to the new Nissan Micra C+C. Únlike all but one of its direct rivals, the Micra C+C combines the practicality of 2+2 seats and a retractable hardtop: rivals have either a vandal-attracting soft-top or just two seats… or both.Conquest sales
As a new model in the Nissan range, it is expected that the stylish Micra C+C will appeal strongly to buyers who have never contemplated a Nissan before. Market research indicates that half of all C+C owners will be aged between 26-45 and the Micra will not be the only car in the household.Nissan also spoke at length to existing owners of small convertibles, and found that the most often heard complaint related to the quality of the roof, most notably in terms of water ingress and wind noise, with squeaks and rattles following close behind.No compromises
One of the inherent qualities of a retractable hard top is that structure is more solid than a fabric-roofed convertible, thus reducing squeaks and rattles at the same time as ensuring wind noise and leaks are eliminated. 'Micra C+C is a style statement and will undoubtedly appeal on an emotional level. But it is also an immensely practical car and can be considered on a rational level. It's not often a convertible can satisfy the needs of both the head and heart, but the Micra C+C is the exception that proves the rule,' says Satoru Tai, Vice President, Nissan Design Europe.BÚILDING MICRA C+C

The innovative C-VIEW folding glass roof of Micra C+C is being produced in an equally innovative fashion – at a factory within a factory at Nissan's highly productive plant in the North East of England.

'To ensure Micra C+C attains the highest possible quality standards we are working closely with our supplier Karmann… so close, in fact, that we can literally rub shoulders with them at the plant.'
Colin Dodge, Senior Vice President, Manufacturing, Purchasing and SCM, Nissan Europe At a glance
- Micra C+C built on same lines as Micra
- Karmann's ‘factory-within-a-factory'
- Roofs painted and assembled on site
- Sunderland: 21 years of achievement
- Europe's most productive plant
- Future guaranteed with two new modelsMicra C+C is built at Nissan Motor Manufacturing ÚK (NMÚK), the company's highly productive plant in Sunderland in England's North East, on the same lines that produce the conventional Micra three and five door hatchbacks. Major change
But the Micra C+C project marks a major change in the way NMÚK operates. For the first time at Nissan, an outside supplier has established a ‘factory-within-the-factory' to fabricate the car's central feature – the C-VIEW roof – on site.German convertible specialist, Karmann, has not only developed the clever folding glass roof for Micra C+C, but also assembles the roof module in Sunderland prior to its fitment on the production line.Quality control
Dr Christian Rennert, Key Account Manager, International Markets for Wilhelm Karmann GmbH, explains: 'Although the complex roof assembly was developed by Karmann in Germany, production of the production module will be undertaken in Sunderland for reasons of quality control and speed of manufacture.''We have established a small production facility within the Nissan plant where we are running two shifts a day and employing up to 50 local men and woman.''This is the first time Karmann has established such a facility within a manufacturer's plant and we will be monitoring its success with a view to establishing similar facilities elsewhere.'Painted on site
All the metal elements of Micra C+C's roof frame are painted with the car by NMÚK before being separated and sent to the Karmann facility. Here the roof's glass panels are bonded into the frame and assembled as a complete module before being reunited with the original car. This process is similar to the way in which car doors are produced: in virtually every car plant, the bare door frames are painted with the car before being removed to a separate facility where trim, glass, electrical features, wiring and locks are added. The completed doors are then returned to the production line where they are attached to the relevant car.Production synchronicity
'By assembling the roof modules in this way, we can ensure synchronicity with Micra assembly as well as ensuring colour matching is perfect and quality remains as high as possible,' says Dr Rennert.Trevor Mann, Deputy Managing Director at NMÚK, adds: 'We welcome Karmann to Sunderland for two main reasons. The first, obviously, is down to the vital contribution they are making towards the production of Micra C+C.'NIMS
'The second is that their integration on site marks the first of such collaborations at Sunderland, but it won't be the last. As part of the Nissan Integrated Management System (NIMS) we are actively talking to other suppliers within NMÚK with a view to integrating production and to ensure we maintain the highest quality levels into the future.'NMÚK celebrates its 21st birthday in 2005. However, it all started from a proposal by Nissan to build a new car plant in the North East of England which was agreed with the British Government in 1984.Just two years later the first car for commercial sale – a Nissan Bluebird – rolled off the production line to mark the start of a remarkable success story. Half million milestone
In 1990, the Bluebird was replaced by the original Primera and in 1992 the milestone half-millionth car was built. At the same time the plant in Sunderland opened a second production line, for the then current Micra.Over the next decade NMÚK really hit its stride, producing record numbers of cars and winning award after award for export achievements. By 1995, it had built one million cars and one million engines while five years later a third production line – this time for the Almera – was opened.Most productive plant
In 2003, the year in which Sunderland built a record 331,924 vehicles, NMÚK was identified as the most productive plant in Europe… for the seventh successive year. Last year, 2004, a total of 319,652 vehicles were built comprising more than 53,500 Primeras, more than 93,350 Almeras and almost 172,800 Micras. Some 75 per cent of that production was built for export by a force of approximately 4,450 workers.ÚK's biggest car exporter
Representing a total investment to date of more than (British Pounds)3 billion, NMÚK has been the ÚK's biggest car exporter for five years and accounts for 20 per cent of the country's total car production.Busy future
Alongside existing models, Nissan has announced that the facility will build the Note and the production version of Qashqai show car, which was shown at Geneva Motor Show in 2004. Production of the former is due to start in January 2006 and of the latter in December 2006.Source - Nissan

Most powerful production Golf ever for the North American market New car has an estimated 290 horsepower, but is more fuel efficient than previous Golf R EA888 TSI® 2.0-liter engine propels DSG® equipped Golf R from 0 to 62 mph in 4.9 seconds ...
© 1998-2020. All rights reserved. The material may not be published, broadcast, rewritten, or redistributed.