Sold for $74,800 at 2008 Gooding & Company.
This is the only Studebaker Commander Straight Eight with a Dual Cowl Phaeton bodystyle ever created. It was given a full body-off restoration; upon completion, it was put on display at the 2004 Meadow Brook Concours. It retains its original coachwork and is finished in white with a taupe beltline and fenders, black Connolly leather interior and side-mount spare tires. Power is from a 250 cubic-inch L-head eight-cylinder engine offering 80 horsepower at 3600 RPM. There is a three-speed gearbox and four-wheel mechanical brakes.In 2008, this one-off Studebaker Dual Cowl Phaeton was offered for sale at the Gooding & Company auction held in Pebble Beach, CA. The car was estimated to sell for $80,000 - $100,000 and offered without reserve. As the gavel fell for the third and final time, the car had been sold for $74,800, including buyer's premium.
By Daniel Vaughan | Mar 2009

This 1929 Studebaker Commander Regal 2-Door Roadster wears an older restoration. There are dual side mounted tires and a rumble seat. The car was once owned by the popular singer, AL Jolson. When new, the car sold for $1,595.
By Daniel Vaughan | May 2009
The Studebaker Commander was produced for several years, representing several body style changes, and first appeared in the 1920s. The company would continue to use the name until its demise in 1966. There were only a few years where the Commander did not appear in Studebaker's line-up during that time; those were in 1936 and 1959-1963. When the name first appeared in 1927, it was Studebaker's middle-series. As the years progress, it would move up and down market, often changing positions from year to year. The name would continue until it was dropped in 1935, only to reappear in 1937 where it served as the company's least expensive model, taking the place of the previous Studebaker Dictator. The company had decided to do away with the 'Dictator' name, due to the negative political connectors associated with the name. Mainly, Adolf Hitler in Germany had tainted the word 'dictator.' The Commander moved up-market in 1939 when Studebaker introduced the Champion model. After the Second World War, Studebaker dropped its President moniker and repositioned the Commander in its place. At the same time, Studebaker introduced an extended wheelbase model known as the Land Cruiser.
The President name reappeared in 1955; the President model became the premium model range and the Commander was demoted to the mid-range model. The name would continue until 1958 and reappear in 1963 for the 1964 model range. It was positioned next to the lowest-priced Lark model and above the entry-level Challenger model.
By Daniel Vaughan | Jun 2008 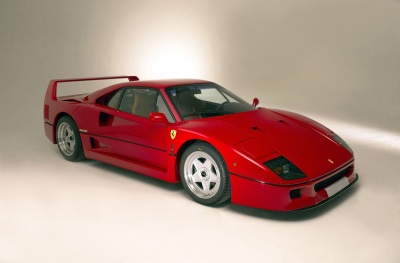 A 1992 Ferrari F40, the Maranello companys 200mph supercar and the last design personally approved by Enzo Ferrari, is the latest top-drawer entry in H%26H Classics forthcoming Duxford sale, the catalogue for which is now online. It will join the headlining...

The two-day event will also drop the hammer on a 1962 Ferrari 400 Superamerica SWB Coupe Aerodinamico along with over a dozen other models from the Italian marque SANTA MONICA, Calif. (December 12, 2014) – Gooding %26 Company, the record-setting...
© 1998-2020. All rights reserved. The material may not be published, broadcast, rewritten, or redistributed.