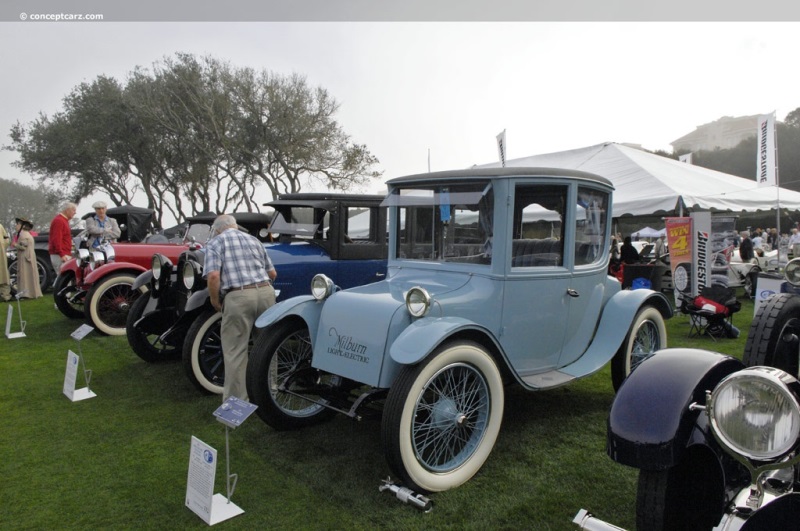 Milburns were built in Toledo, Ohio, by the Milburn Wagon Company from 1915 through 1923. The Milburn was a light electric automobile with a top speed of 19 mph, and required a recharge every 60-70 miles. Milburn went on hard times, and started building bodies for Oldsmobile to help cover their overhead. In 1923, General Motors bought the building and began producing Buicks. As a result, Milburn was no longer. The color on this example is the original, and a light pink shade was offered as well, a novelty for its day, when most cars were painted somber tones of blue, brown and gray.
Born in Alston, England, George Milburn entered this world on June 3, 1820. After immigrating to Canada, he married in 1941 and eventually moved to Mishawaka, Indiana. His daughter Ann married Clement Studebaker. Milburn began George Milburn & Co., in 1848, a general store that was quite prosperous. He bought a one-third interest in James Oliver's initial plow company and invested money in the Mishawaka Hydraulic Co. The Milburn Wagon Company was begun on August 23, 1869 and started with a capital of $100,000. At the same time, Milburn owned a hotel and an entire city block and he still had the Joseph County farm land.The entire wagon company operation was relocated to Toledo, Ohio in 1873. By the spring of 1875 the factory opened, and very soon became the largest manufacturer of farm wagons in the world. With its completely mechanized production, the Milburn Wagon Works only required workers to operate machines. Near the end of September of 1914, the Milburn Wagon Company began the manufacture of their '1915' Milburn Light Electric automobiles, which were based on a design by Karl Probst. Probst is famous for designing the Bantam Jeep. From 1915 until 1923, over 4,000 vehicles were produced.Model 15, the 1915 Milburn Light Electric Coupe was priced at $1,485 while the Model 151, the Roadster was priced at $1,285 and both of these models were constructed on the same chassis with a 100 inch wheelbase. At the time, Milburn was the lowest-priced electric and was a much lighter vehicle than any of its competition. Two reverse speeds and four forward speeds were featured on the 1915 Milburn and it had a range of around 50 miles on a charge and the coupe could achieve a speed of 15 mph, and a Roadster could reach 19 mph.
A Brougham was introduced in 1916 and a year later a Touring style, which was advertised as a Town Car or a Limousine and featured an open front driving position and an enclosed rear passenger compartment. Model 22, a 1916 Milburn Electric Brougham was a superior example of a very successful electric vehicle of the early 20th century. This model featured rechargeable batters and had a top speed of 15 mph and around 4 hours of motor time on just a single charge. Milburn provided the city dweller with a very handy option rather than the gasoline engine at the time.
A Light Delivery truck style was also available for $985 and was discontinued following the 1918 model year. In this same year, a Sedan that appeared more likes its gas guzzling competitors; this model had a top speed of 30 mph, and could achieve 100 miles on just one charge. In 1918 batteries were placed in wheeled boxes by Milburn to ensure a speedy exchange of used batters for charged ones at 'central power exchanges'. Tillers were levers that controlled the steering and speed of the Coupe or the Brougham by the driver and hinged down into the lap of the driver from the left side. Both the Sedan and the Roadster had steering wheels while the Limousine featured both kinds, a tiller in the rear and a wheel up front.A taxicab was introduced in 1920 by Milburn. A range of electric trucks were also produced by Milburn with a ½ ton chassis that sold for $1,585 and a 1 ton chassis for $1,985. An entire range of cab and bed styles at a variety of prices were available for the buyer to customize the truck as desired.In 1919, the Milburn plant was decimated by a fire and the total losses equaled around $900,000 included 30 completed electrics and even more bodies of automobiles. Production was begun again in January of 1920 in a warehouse on the grounds of Toledo, University. Milburn Wagon Company capitalization was increased to $1 million in 1921. At this time, the 800-man workforce was approximately 600 constructing automobile bodies, mostly for Oldsmobile, and 200 men constructing cars. GM purchased the plant for $2 million in February of 1923. Milburn employees were allowed to stay in the plant for two months following this acquisition to finish the cars and bodies that were still under construction. Buick then moved in, and the Milburn Electric ceased to be produced.A 1918 Milburn Electric was owned by President Wilson, and e used it to drive around the White House grounds. These vehicles were a symbol of status like no else, and were considered to be among the most exclusive and elegant vehicles of the time. These vehicles were also used by President Woodrow Wilson's secret service men. Today a 1918 Milburn Electric Coupe, Model 27 is available to view in the Carriage House at the Northern Indiana Center for History.
There are only 35 1920 Milburn electric vehicles known to be in existence today.
By Jessica Donaldson