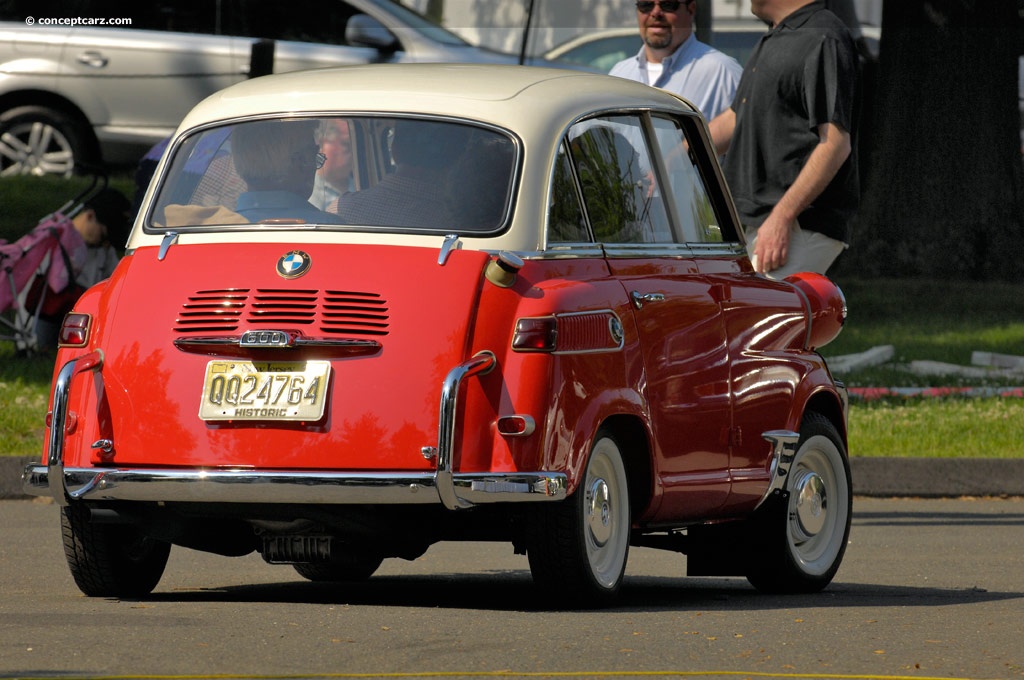 Prior to World War II, the German manufacturer Bayerische Motoren Werk (BMW)built motorcycles and sports cars. At the war's end, it found itself in precarious circumstances as their Munich factory had been destroyed, and their plant in Eisenach lay in Soviet territory. Car manufacturing did not resume until 1952, and it consisted of a single model called the 501. This large sedan received V-8 power for 1954, but sales remained slow. The large, luxury car segment was not sustaining BMW, so they went to the side of the spectrum and purchased Italian industrialist Renzo Rivolta's Isetta minicar enterprise and the rights to the tiny one-door Isetta. The plan worked and over the next 15 years sold over 160,000 examples.

Introduced in the mid-1950s, the BMW Isetta microcar was powered by a one-cylinder, four-stroke, 247cc motorcycles engine which initially offered 12 horsepower. Although it retained the majority of design elements of its Italian originator of Renzo Rivolta's Iso SpA, BMW re-engineered much of the car so that parts from the BMW Isetta Moto Coupe were not interchangeable with the Iso Isetta. The 'bubble window' styling remained, but with a BMW badge below the windscreen and the headlamps were fixed separately to the sides of the bodywork.

The BMW Isetta 600 was powered by a 582cc twin engine from the R67 motorcycle. It was an enlarged version of the Isetta microcar with a more conventional four-wheel configuration. The front of the vehicle was nearly identical to its Isetta 300 sibling, but the wheelbase was lengthened to allow four seats. It was given a conventional rear axle setup with a semi-trailing arm independent suspension. The transmission was a four-speed, like the Isetta, but a Saxomat semi-automatic arrangement was also available as an option. Access to the front seat was by the Isetta's unique 'front door,' while a conventional door on the right side provided entry and exit from the rear seat. The reliable boxer twin-cylinder, fan-cooled engine was located in the back and gave the vehicle a top speed of around 64 mph. Production lasted from the fall of 1957 to 1959 with approximately 34,000 examples sold. Sales were initially strong due to fuel shortages and Middle Eastern instability, and the 600 appealed to the economy-minded consumer.

Production lasted from the fall of 1957 to 1959 with approximately 34,000 examples sold. Sales were initially strong due to fuel shortages and Middle Eastern instability, and the 600 appealed to the economy-minded consumer.

The production lifespan of the Isetta 600 was brief, however, its rear suspension and chassis design would provide the basis for the more conventional 700, which was introduced in 1959, and many subsequent models.
by Daniel Vaughan | Apr 2020

At a time when cheap, short-distance transportation was preferred by consumers, BMW introduced the Isetta in November of 1953 at Turin. One of the most successful microcars that were produced in the post-WWII years, the egg-shaped Isettas design originated in Italy. The Isetta received the nickname bubble car because of its bubble-like windows and its egg shape. Other nicknames for the Isetta were....
Continue Reading >>

The Isetta 600 used a semi-trailing arm rear suspension and was the first production vehicle to use this design. It was also the last BMW model to use a frame.....[continue reading]

The BMW Isetta microcar was a popular car, but it was deemed too small to compete with the Volkswagen Beetle. So, in 1957, BMW introduced a large, four-seater version called the 600. It used the Isetta's front structure and unusual single front-openi....[continue reading]

This BMW 600 was the recipient of a complete 2013 restoration. Power is from a 582cc air-cooled four-stroke opposed twin-cylinder engine fitted with a Zenith carburetor. There is a four-speed manual transmission with synchromesh and a four-wheel hydr....[continue reading]

The BMW Isetta 300 helped propel German reconstruction and helped sustain BMW's financial strength. It became a fashionable cult car with strong sales on both sides of the Atlantic. There was, however, a wide price gap between BMW's Isetta and the mo....[continue reading]

The original BMW Isetta, with seating for two individuals, was stretched to house four occupants, creating the Isetta 600 Series in 1959. It derived its name from the BMW R67 motorcycle-sourced boxer engine. It retained the prior Isetta's front-end d....[continue reading]