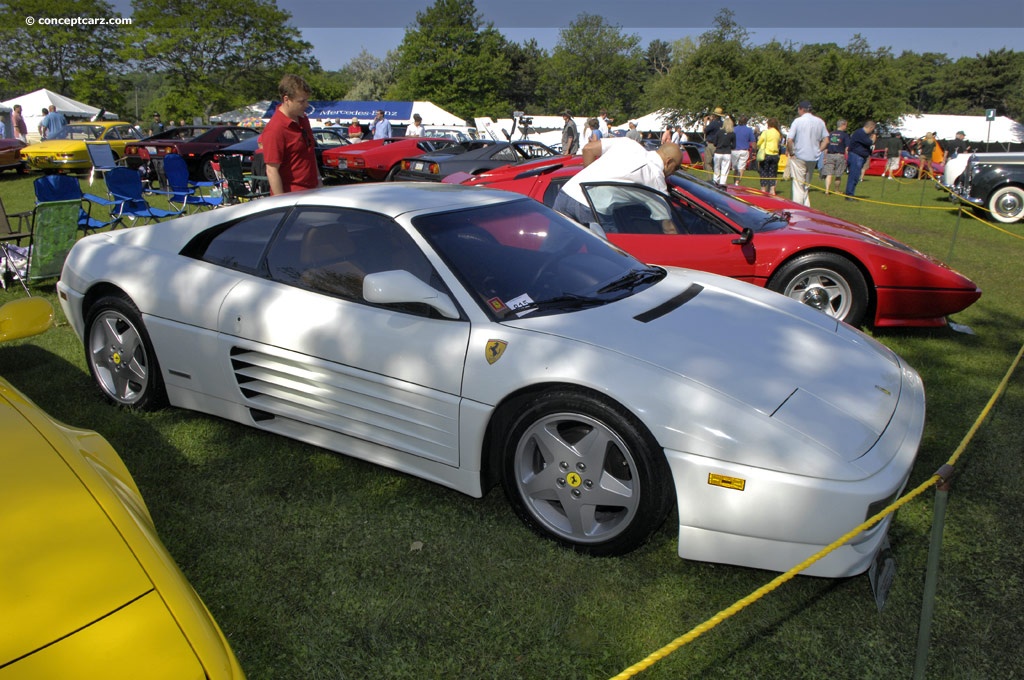 The 348 was powered by Ferrari's 3405cc V8, introduced with the car in 1989. The 90° light alloy V8 had 10.4:1 compression and 48 valves actuated by four overhead camshafts. It produced 300bhp at 7200rpm and 237lbs-ft at 4200rpm. The V8 was installed longitudinally in the 348, bolted along with the transmission and rear suspension into the removable tube-steel rear sub-frame, a significant innovation.

The new block had a revised basic geometry. It featured a five-main bearing crankshaft and nikasil-steel cylinder liners surmounted by heads with revised geometry and centrally mounted spark plugs for a high efficiency, high volume, high speed flow for spark and combustion efficiency. The valves were actuated through bucket tappets by dual overhead camshafts. A dry sump lubrication system provided necessary lubrication under all conditions. A pair of side-mounted radiators cooled the engine.

Fuel was delivered from the center mounted tank to the intake runners through fuel injectors by a high pressure pump. Air was delivered from the high side scoops through articulated rubber and steel tubes to a filtered square airbox above the transmission and from there through twin throttle bodies to the intake manifolds situated above the engine. An advanced Bosch Motronic M2.5 fuel injection and ignition system controlled delivery and spark until 1993 when the M2.7 replaced it. Exhaust gasses flowed through a steel manifold and a tuned exhaust system with catalytic converters.

Power was transmitted from the flywheel to the rear wheels through the clutch, gears, final drive and constant velocity joints. The new transmission was mounted across the rear of the engine in the style of pre-turbo Formula 1 racing Ferraris. The clutch sat at the rear of the drivetrain. The new configuration sited the entire drivetrain four inches lower in the chassis than had the previous model.Source - Ferrari
Replacing one of the most popular models ever, the Ferrari 348 took over the 308 / 328 lineage that stretches back to 1975. With its high standard of build quality, along with exceptional performance, the Ferrari 348 was a popular choice. Built in Berlinetta, Targa and Spider body styles, the 348 was produced for more than five years between 1989 and 1995. A mid-engined, rear wheel drive v8 powered, the Ferrari 348 was a 2-seat sports car. Several limited edition versions were also made. A factory homologation special was produced, the GT Competizione and in the US-market only Serie Speciale.

A huge monumental departure from its V8-engined predecessors, the chassis on the Ferrari 348 featured a pressed steel chassis with tubular engine sub frame rather than the earlier 308 and 328 models that utilized a tubular steel chassis. The steel chassis was the first Ferrari to universally comply with global crash testing regulations.

Following a tradition that had begun in 1967 with the Dino 20 GT, the engine was mid-mounted for all smaller capacity production Ferrari's to feature this competition inspired layout. Though unlike the Dino's, 328's and 308's, the Ferrari 348 ad its engine dry sumped Tipo F119D 3.4-liter V8 engine placed longitudinally, like the Ferrari's 288 GTO and the F40.

Due to the 90 degree V8, the displacement was increased to 3405cc because of a bore and stroke of 85 x 75mm respectively. Not on tap at 7200rpm, the output was increased with 300bhp with compression being set at 10.4:1 and Bosch Motronic M2.5 fuel injection controlling both cylinder banks. Mounted on the rear of the engine, a transverse gearbox eliminated any rear end luggage room. This lack of space was compensated with extra space beneath the front lid.

Zero to sixty was achieved in only 5.5 seconds, with the top sped of 165 mph. Created by the famous Turinese styling house, the 348's body and interior were created through the partnership between Pininfarina and Ferrari. The five year old Testarossa was the influence behind the 348's body, along with the full width rear grills that covered the tail lights and the straked engine cooling ducts.

All Ferrari 348 models were produced with dual-computer, double-redundant Anti-Lock Braking systems. All 348's were shipped with on-board self-diagnosing Air Conditioning and heating systems. Aftermarket options included Traction Control and Launch control that were available through Gemballa, among others. The list of options included a set of leather fitted luggage that was designed by the well-known Italian firm Schedoni, and metallic paint. Following its introduction at the Frankfurt Salon in September of 1989, the Ferrari 348 was ordered in great abundance throughout the globe.

During its production several updates were made, and these included different shock absorbers and mounting points, revised fuel injector systems and relocated batteries. Over 8,000 Ferrari 348's were produced during its production. After late 1993 both the TB and TS models were replaced.

The 348 was revised in this same year with additional power that now reached 312 bhp on the U.S. models and 320 bhp on European models while keeping the same 3.4 liter engine. Body-colored rather than black, the revised vehicles, the 348 GTB and GTS had a rear track that was now one inch wider due to addition of spacers and suspension geometry that was updated to greatly enhance its super-car-level handling, body control and ride. Phasing out the Mondial Cabriolet, the 348 Spider convertible model was also introduced this year.By Jessica Donaldson

The Ferrari 348 Series Speciale was produced in response to the United States markets demand for a unique variation of the popular 348. The 'Series Speciale' came with slightly different cosmetics and seats, tuned exhaust, and special badging. The m....[continue reading]