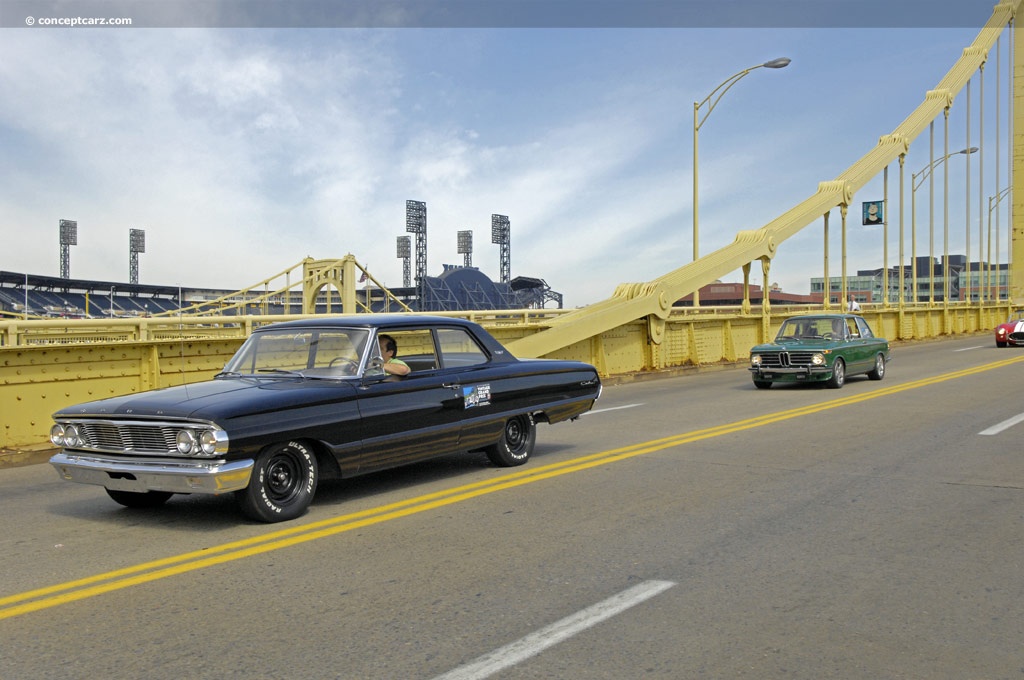 Ford's first all-new post-war styling was applied to its 1949 model range, with the Custom Series representing the top-of-the-line trim. The following year, the name was changed to Custom Deluxe, and then to Customline for 1952 when it became the intermediate model, positioned above the Mainline and below the Crestline. After a brief absence, the name returned for 1957 along with a new Custom 300 series. The Custom Series was the entry-level model, followed by the Custom 300, and the range-topping Fairlane. The Custom 300 was the 'base' Ford for 1958 and dropped in 1960. The name was revived once again in 1964. The 1964 Ford's wore all-new styling though the engine changes remained mostly unchanged. The Custom Series was the entry-level full-size model with the Custom 500 being the upper-trim level of the base-line Custom Series. The compact Falcon was the least expensive and rested on the smallest platform. The Thunderbird offered sporty performance in an elegant two-door package. The mid-sized Fairlane rested on a 115.5-inch wheelbase while the full-size vehicles, including the Galaxie, had a 119-inch platform. The Ford Custom Series had large, round taillights and the Ford name in block letters. It had chrome windshield and rear window moldings, dual sun visors, and armrests on all doors. The Custom Series was Ford's entry-level vehicle with prices starting at $2,350 for the two-door, six-cylinder sedan and exceeding $2,500 for the 4-door V-8 Sedan. That figure would continue to climb depending on the engine and the number of accessories.
The Ford Custom Series was available with a variety of engines including both six- and eight-cylinder units. The cars fitted with the V-8 engines had the 'V-8' symbol shown on the side of the car. The six-cylinder engine had overhead valves, a Holley one-barrel carburetor, four main bearings, 8.4:1 compression, a 223 cubic-inch displacement, and developed 138 horsepower at 4,200 RPM. The base eight-cylinder engine had 260 cubic-inches of displacement, five main bearings, a Holley two-barrel carburetor, and 164 horsepower at 4,400 RPM. Ford's arsenal of eight-cylinder engines included the 289 with either 225 or 271 hp, the 'Interceptor' 352 with 250 horsepower, and the 390 CID V8 with 300 to 425 hp.
In total, there were 57,964 examples of the 1964 Ford Custom 4-door sedan produced. The two-door sedan saw slightly lower sales, at 41,359 units produced.The Custom 500 models wore additional chrome windshield and bodyside horizontal chrome trim, and rear window moldings. The interior rubber mats used in the 'base' Custom were replaced by nylon carpeting, and there were two sun visors and armrests with ashtrays on all doors. The six-cylinder Custom 500 four-door sedan had a base price of $2,500 and the two-door sedan listed at $2,450. The eight-cylinder option added approximately $115 to the base price. The sedan was the more popular of the two options, with 68,828 examples built compared to 20,619 of the two-door sedan.
By Daniel Vaughan | Jul 2009

The Ford Customline was produced from 1952 through 1956. It was a model placed between the Mainline and the Crestline and was available with either a six or eight-cylinder engine. The three-speed manual gearbox was standard with the automatic unit offered as optional equipment.....
Continue Reading >>
Concepts by Ford