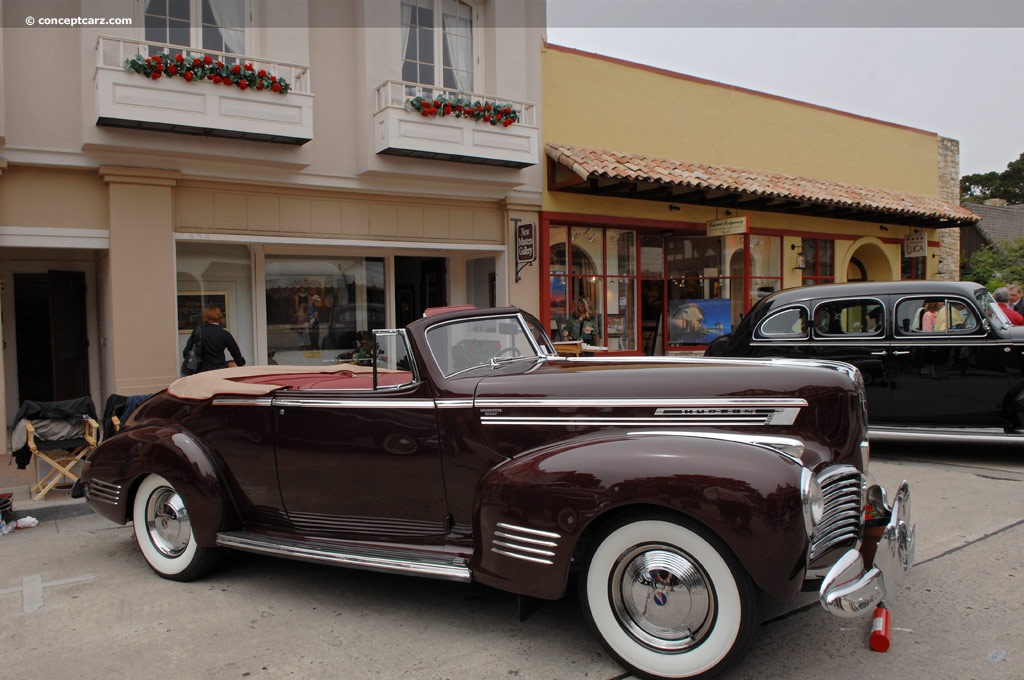 Introduced in 1941, the Hudson Commodore was produced by the Hudson Motor Car Company until 1952. The Hudson Motor Company was established in Detroit and has a long and lucrative history. The Commodore model was the lushest and exquisitely luxurious Hudson model ever produced and the first generation introduced the 2-door coupe, 4-door sedan, and the 2-door convertible. The largest Hudson model also, the Commodore model rode on Hudson's 121 ' wheelbase, while the Commodore Custom's rode on the same for their coupes, or 128 ' wheelbases for sedans. The Hudson Commodore's were powered by either Hudson's exclusive 202ci I6 that produced 102 bhp or Hudson's 254.4 I8 that produced 128 bhp.

The largest model range that was introduced for this year, Hudson lineup was attempting their biggest lineup of all times. The Commodore lineup consisted of coupes, convertibles, and sedans. A forward-hinged hood that opened from the rear was continued to be in use by Hudson's body styling, while at the same time the hood slid downward over the grille.

1940 and '41 models received a snazzy new up do for the 1942 year that included new concealed running boards, external trim arrangements, and enlarged front grilles. The 1942 model year was ended in January as Hudson promoted its economy over luxury in its all-new shortened model for U.S. war production.

The second generation of the Hudson Commodore began in 1946 and lasted until 1947. This new range included 4-door sedans as well as 2-door convertibles. On August 30, 1945, Hudson began its postwar automobile production and the body-styles were trimmed down to Sedan, Convertible and Club Coupe. Keeping the models strongly based on the '42 model Hudson, these models only received small cosmetic updates. The biggest update did include the car's grille now sporting a concave center section.

In comparison to other similar model makes, Hudson automobiles were much more fully trimmed and all Hudson models received flashy accouterments. They included ashtrays, twin air-horns, and armrests on the doors, windshield wipers, locking glove box, stop lights, sealed beam headlights, and deep pile carpeting. Both the Commodore and Commodore Customs received air-foam seat cushions; as Hudson is famous for being the original automaker to unveil foam seat cushions. Other new innovations were rear armrests in the sedans, door-step courtesy lights and gold etched lettering on the dashboard panel.

Hudson's top-of-the-line series, the 1948-1949 Commodore Eight came in three body styles including a convertible, and was a much more popular model than previous versions, due to its innovative 'Step-Down' design. For these two model years alone, nearly 60,000 units were sold.

The third generation of the Hudson Commodore was unveiled in 1948 and lasted until 1952. An all-new 'step-down' automobile body was released by Hudson for the 1948 model. The Frame vehicles place the body of the car onto the chassis and then the two units were bolted to each other. Since the height of the vehicle was now much higher, passengers needed to step up into the car; and this was the major need behind the running boards. The passenger compartment was now placed inside the chassis, and the vehicle's perimeter frame now encircled the passenger compartment. This is how Hudson passengers 'stepped-down' into the vehicle. The step-down allowed Hudson to take advantage of serious weight-saving techniques through uni-body construction. The Hudson vehicles were now even safer since surrounded by the car's chassis; all of this combining to make a well-performing and all-around safe vehicle.

Only one series was available for the 1948 Commodores and were available in either I8 or I6 powered versions. The body styles offered for this year was a convertible coupe, and two and four-door sedans. On the inside, the Commodore was upholstered in leather for convertibles and in broadcloth on sedans. A variety of standard features were also included on the Hudson line in the same fashion of the history of their line, for no additional up-charge options. A total of 35,215 units were produced of the Commodore Eight.

The Commodore lineup gave birth in 1949 and now included a much more luxurious Commodore Custom line. Only minor trim changes on the outside of the vehicles were made for the 1950 through 1952 model year for the Hudson Commodore.

For the last year of the Commodore, the model was split into an Eight series and a Six series. The outside of the vehicle received yet another trim change. Unfortunately, the design behind the Step-Down bodies began to look faded and outdated by the end of the 1951-1952 model years. Rather than redesign the older model, company President A.E. Barit chose instead to replace the Commodore with a compact Hudson. Starting in 1953, Hudson would only offer the Hudson Hornet and the Hudson Wasp line.By Jessica Donaldson

Twice entered in car shows, this 1941 Hudson Commodore 8 Convertible was judged best in class at the Marin-Sonoma Concours in May of 2009. This car is from the year of the Commodore's introduction, when it became the largest and most luxurious Hudso....[continue reading]