Forty Years After the Debut of the Original Datsun 240Z, the Iconic Z® Continues to Capture the Imagination and Passion of Sports Car Enthusiasts Worldwide

The 25th anniversary is silver, the 50th is gold. And the 40th? Another precious metal, or more correctly metal, rubber and glass – the Nissan Z®. Forty years ago, on October 22, 1969, the Datsun 240Z arrived in North America, heralding a new era in sports car design.

Where previous sports cars were primarily a.) imported from England or Germany b.) expensive c.) fragile or unreliable or d.) all of the above, the new import from Japan offered the performance of a Porsche, the looks of a Jaguar and the price and reliability of, well, a Nissan. The 240Z was a revelation to the automotive world – an affordable sports car that could be driven every day and was accessible to anyone with the $3,626 base price.

And though the price of a new Z® might have changed a little in the past 40 years, its unmatched value, style, performance and segment leadership remains stronger than ever. To celebrate, Nissan has created a special, limited production version of the current 2010 Nissan 370Z Coupe, the 370Z 40th Anniversary Edition. It will be available at select Nissan dealers nationwide beginning in spring 2010.

'Throughout the history of the automobile, a rare handful of cars stand apart as vehicles that not only capture the imagination of the world but also embody the essence of the automaker's brand, engineering and ideals. The Z® is just such a vehicle,' said Al Castignetti, vice president and general manager, Nissan Division, Nissan North America, Inc.

Changing Times – Literally
When the original Datsun 240Z debuted as a 1970 model, its design and performance were considered state-of-the-art: a 150-horsepower 2.4-liter single overhead cam inline 6-cylinder engine, 4-wheel independent suspension, 14-inch wheels, choice of a 4-speed manual or 3-speed automatic transmission, and a quarter-mile acceleration time of 17.1 seconds at 84.5 miles per hour. The 240Z was conceived as a closed coupe body, rather than the typical open-top sports cars of the age, to enhance body rigidity and, therefore, improve handling and durability.

Pricing of the 370Z 40th Anniversary Edition will be announced closer to its on-sale date next spring.

A Brief History: Six Generations of Z®
The journey from the original 240Z to the current 370Z, of course, made a number of interesting stops along the past 40 years. Interestingly, the 240Z might not have made the journey to America in the first place, if not for the efforts of one man.

Though many, many people were responsible for the design and engineering of the first generation 240Z, its success in North America can be attributed to Yutaka Katayama, who was president of Nissan's Ú.S. operations at the time. Known affectionately as 'Mr. K,' he was convinced that the company's new sports car design would be a hit in the Ú.S. There was just one problem – the vehicle's name: the Fairlady Z (which is still used in the Japanese market today).

With a name change for this market to '240Z' and some aggressive marketing, including early motorsports success, the Z® became an instant hit – bringing attention and buyers not just to Z®, but also to the entire brand.

After overseeing Nissan's growth in the Ú.S. in the ‘70s, Katayama returned to Japan and remains, to this day, linked to the Z®'s success here and around the world. On September 15th, 2009, Mr. K celebrated his 100th birthday and received cards and birthday greetings from Z® lovers everywhere.

In 1974, as the engine displacement climbed to 2.6 liters the name changed to 260Z. The 2+2 model with an extended roofline and tiny back seat also appeared. In 1975, engine size increased again to 2.8 liters and the name changed to 280Z. Z® cars continued to dominate on the racetrack, with Pete Brock, John Morton, Bob Sharp and P.L. (Paul) Newman among the many talented drivers.

Z® sales continued to climb with the introduction in 1979 of the new second generation 280ZX. Now priced at just under $10,000, the 280ZX was named Motor Trend 'Import Car of the Year' and sales passed 86,000 units. T-tops and a turbocharged engine followed in the early ‘80s.

In 1984, Z® engine displacement increased again, with a 3.0-liter V6 replacing the classic Z® inline-6, and the 300ZX was born. Also, a specially equipped model celebrating the company's 50th anniversary and priced at $25,999 was introduced. The 1984 Z® was the best selling sports car in America.

The 1990 300ZX captured the Z®'s second Motor Trend 'Import Car of the Year' award, along with a spot on Car and Driver and Road & Track '10 Best' lists. The 300ZX also captured Automobile's 'Design of the Year' and the first of four 'All-Stars' awards.

By the mid-‘90s, however, sports car sales in general were slowing and the Z® had lost its 'affordable' sports car positioning. With Z® sales declining sharply and the core 'value' positioning no longer part of the 'Z® DNA,' sales of the Z® in the Ú.S. slumped and sales were stopped following the 1996 model year. The last 300ZX imported into the Ú.S. was inducted into the Petersen Automotive Museum in Los Angeles.

The next chapter of the Z® history came just before the end of the century. In 1999, Nissan and Renault formed what has become the highly successful Renault-Nissan Alliance.

Mr. Carlos Ghosn was assigned by Renault to head the new management team. Among his first tasks was not just to look at the business aspects, but to find the 'soul' of the company. In interview after interview, people inside and outside the company brought up one model to him, one letter: Z®.

Development of the new Z® began later that year, with the return to the values of the original 240Z – a car that sports car enthusiasts would look forward to driving everyday; quick, inspiring and affordable.

Following the 350Z's unprecedented success, the sixth generation Z®, the 2009 370Z was launched last December. Now the little sports car that could comes full circle with the announcement of the 370Z 40th Anniversary Edition.

'It's almost inconceivable that it has been 40 years since the original 240Z changed the course of Nissan and the concept of affordable, everyday sports cars,' said Castignetti. 'In a year, 1969, marked by the first man to walk on the moon, the 240Z made a remarkable first step of its own. Happy anniversary, Z®.'Source - Nissan

All 2010 Nissan 370Z models are equipped with a standard 3.7-liter DOHC V6 engine with Variable Valve Event and Lift Control (VVEL). The engine is rated at 332-horsepower for the 370 Coupe and 370Z Roadster, while the NISMO 370Z Coupe is tuned to produce 350 horsepower. Buyers also have a choice of 6-speed manual transmission with an available SynchroRev Match synchronized downshift rev matching system or a 7-speed automatic transmission (NISMO 370Z and 40th Anniversary Package are available with 6-speed manual transmission only). Crisp handling is once again provided by a 4-wheel independent suspension.

About Nissan in North America
In North America, Nissan's operations include automotive styling, engineering, consumer and corporate financing, sales and marketing, distribution and manufacturing. Nissan is dedicated to improving the environment under the Nissan Green Program 2010, whose key priorities are reducing CO2 emissions, cutting other emissions and increasing recycling.Source - Nissan

The 240Z was not a new idea. Sturdy engineering, excellent performance, low price, attractive styling, and average interior had been achieved by many manufacturers prior to the Z-car. The reason the 240Z car was so great was because it capitalized on all these criteria and perfected the concept of a low-cost, reliable, sports car. Mr. Yutaka Katayama is considered the Father of the Z Car and....
Continue Reading >> 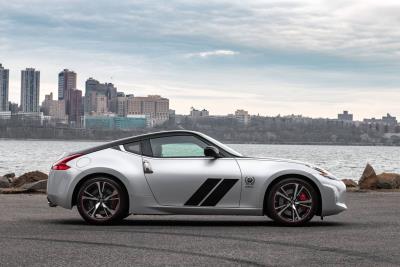 NASHVILLE, Tenn. – Nissan today announced U.S. pricing for the 2016 370Z Coupe, 370Z NISMO and 370Z Roadster, which are on sale now at Nissan dealers nationwide. Once again offered in a selection...