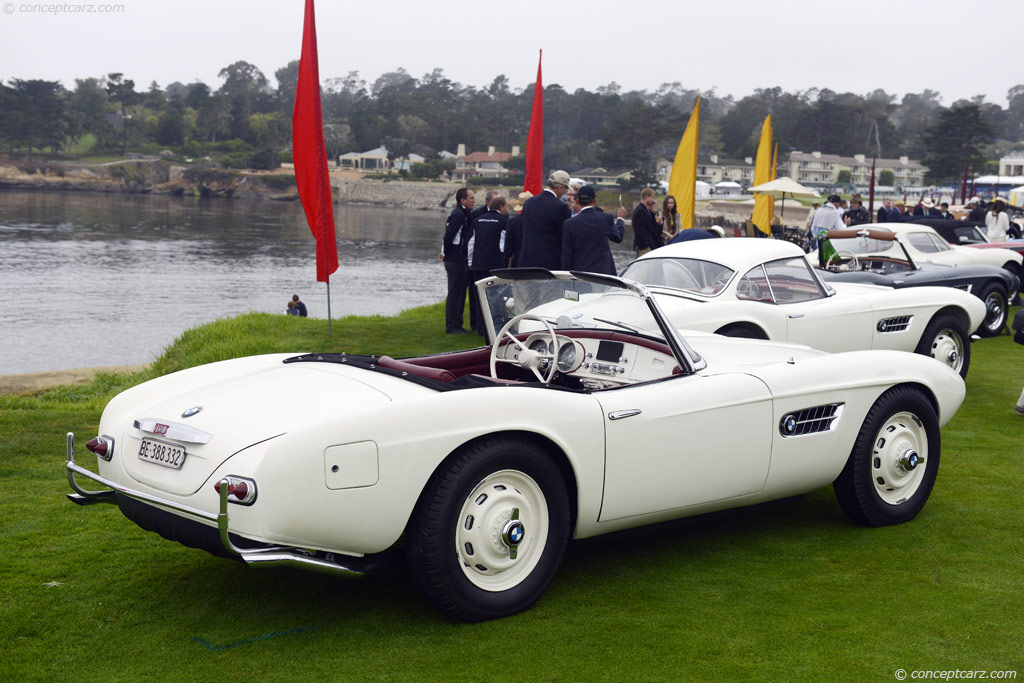 The 507 was a combination of power, exquisite styling, and a lightweight body. The exterior was constructed of light-weight alloy and attached to a metal frame and pressed-steel wheels. Under the hood was a 90-degree eight-cylinder engine that produced 150 horsepower. Top speed was achieved at 125 mph.

The official debut was at the 1955 Frankfurt Motor Show where it was the star. The car was shown in incomplete form with objects being place in the engine bay to fill the void of the engine that was still under construction. A working prototype was shown in September at the Paris Show. Customers took delivery the following year in November. One of the more famous customers was Elvis Presley. There were two production runs of the 507, the Series 1 and Series 2. The Series 2 were very similar to the first Series, but include minor updates such as a modified dashboard and revised bulkhead to accommodate extra luggage. With 210 Series 2 cars, they were produced in greater numbers than the 42 created Series 1. A heavy price tag was responsible for theses low production numbers. The cost to produce these was steep, so their price tag followed in similar fashion.

The two-seater 507 sports cars based on the 503 were built to exceptional quality and engineering but unfortunately not well enough. In modern times, these are highly sought after cars because of their low production figures and the history of the marque.
By Daniel Vaughan | Aug 2006In the 1930s BMW was famous for their top sports cars, but WWII put the marque so behind that they couldn't return to auto production until 1951. The sensational 507 was monumental in proving that BMW could produce durable, fast, superbly engineered road vehicles.

Introduced at the Waldorf-Astoria Hotel in New York in 1955, the pricy BMW 507 roadster was created with the intent of improving BMW's sporting image. BMW had high hopes for the classy 507, but unfortunately the snappy little roadster was unable to live up to these aspirations. The goal was to export the 507 to the U.S. at a rate of several hundred per year, but the vehicles were too expensive for postwar Germany, and too eccentric for American auto tastes and at a time when most Americans hadn't ever heard of BMW. BMW didn't have the tooling to produce the 507 in the desired numbers by him, and it took longer than expected to get the car to America.

Hoffman was unimpressed by any early designs by Ernst Loof and BMW contracted German-American industrial designer Count Albrecht von Goertz to design the BMW sport models with the 502's big chassis and running gear. In November of 1954 Goertz designed the 503 coupe and convertible with the 502's chassis and pushrod aluminum V8 engine. Though he was pleased with the 503 and the boost it gave to BMW, Hoffman wanted a much more dramatic car, one that would be sensationally eye-catching on American streets. Hoffman persuaded Goertz to take even more creative liberty, and the result was the 507 two-seater. Goertz stressed simplicity in the design of the 507 and was intricately involved in every part of the design from the grille to the cockpit.

After it's introduction, production of the BMW 507 began in November of 1956. Hoffman had high hopes of selling the 507 around a price of $5,000, but high production costs made that impossibility. The BMW 507 was closer to an initial price of $9,000, before rising to $10,500, but the model helped to establish BMW as a forward-thinking manufacturer that has continued to this day. Hoffman had hoped to sell around 5,000 units a year, but despite celebrity buyers that included Georg 'Schorsch' Meier and Hans Stuck, the 507 never reached more than 10% of the sales volume that rival Mercedes-Benz 300SL achieved. For 1959 BMW lost around DM 15 million with the company losing money of every single 507 model built.

The 507 sported a pointed nose with BMW's trademark twin grilles. Much like the then-new Ford Thunderbird two-seater, the 507 offered a removable steel top to go with its convertible top. A number of models were sold with an optional hand-fabricated removable hardtop that was unique to the car it was made for and only fit on that specific vehicle. Eventually the styling of the 507 inspired the Z3 and Z4, and especially the Z8. The 507 was built on the same frame as the 503, which was shorted from 111.6 inches to 98 inches. The 507 had an overall length of 190.4 inches and an overall height of 49.5 inches and weighed 2,900 lbs. The body was constructed almost entirely from hand-formed aluminum and no two models were ever exactly alike. Fully equipped and nicely detailed, the largely hand-built 507 cost about the price of two Cadillac's when it finally arrived at Hoffman's prestigious dealership.

Powering the 507 was the aluminum alloy BMW OHV V8 engine of 193.3 cubic inch displacement that featured pushrod-operated overhead valves. It featured two Solex Zenith 32NDIX two-barrel carburetors, a chain-driven oil pump and compression ratio of 7.8:1 that produced 150 hp at 5,000 rpm and was joined to a close ratio four-speed manual transmission. Standard was a rear-end ratio of 3.70:1, but optional were ratios of 3.42:1 and 3.90:1. The BMW 507 could hit 0-60 mph in just 7 to 8.8 seconds, depending on gearing and had a top speed range of 128-138 mph.

A stellar example of a highly desirable limited-production German sports car, only 253 507's were built during the models four-year production run. In 1959 production was terminated. The launch of cheaper, newer models like the BMW 700 and the 'New Class' 1500 helped BMW recover as a company. A total of 202 BMW 507's are thought to have survived today.

The landmark model has been owned by numerous famous people including the iconic Elvis Presley who leased a white 507 in 1959 for $3,500 while stationed with the Army in Germany. Elvis would often fight lipstick stains all over his 507. In 1963 he gifted the car to the actress 'Bond Girl' Ursula Andress. John Surtees was another famous owner who received a 507 by Count Agusta after winning the 1956 500cc World Motorcycle Championship on a MV Agusta. Surtees still owns his 507 and worked with Dunlop to add disc brakes for the front wheels, before eventually adding disc brakes on all four wheels. In October 2007 Bernie Ecclestone's 507 sold for $904,000 at a London auction.

Anything truly iconic is a matter of taste reaching a critical mass. It involved timing and the willingness to take a chance. It would be fitting; therefore, that such an iconic car would attract such icons as owners.

It wouldn't start that ....[continue reading]

The BMW 507 was unveiled at the Frankfurt Auto Show in 1955. The car wore styling courtesy of Albrecht Count Goertz and powered by an overhead valve V-8 capable of producing 165 horsepower. ....[continue reading]

This BMW 507 has seen very little public use for nearly 3 decades. Its prior owner seldom opened his garage to outside enthusiasts. After a negotiation between the current and prior owner, the 507 once again saw the outside world. ....[continue reading]

Despite initial plans to sell several thousand cars, the BMW 507 was expensive to build and had to be priced accordingly, so only 252 were ever sold plus the two prototypes. However, it did magnificently represent BMW's tradition of sporty, high-qual....[continue reading]

Production of the BMW 507 commenced in November of 1956 and continued through May of 1959 after just 252 examples were built. This particular example was built towards the close of the 507's four-year production run. This is a Series II model, of whi....[continue reading]

The BMW 507 was not designed with motor sports in mind, though several examples were entered in major racing events, including the Mille Miglia and the Tour de France. Depending on the gear ratio selected, the 507 was capable of achieving 125 mph to ....[continue reading]

Bayerische Motoren Werke began in 1961 as an aircraft engine manufacturer. The firm expanded into motorcycle production in the early 1920s and in 1928 it took over the Dixi Company in Eisenach, Germany, which produced under license a version of the B....[continue reading]

BMW introduced their 507 in late 1955 and it quickly became their flagship model. It wore styling by Count Albrecht von Goertz which had been heavily influenced by New York importer Max Hoffman. The lightweight alloy body evoked speed and elegance. I....[continue reading] 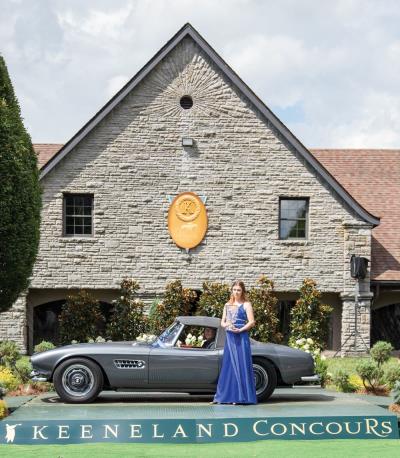 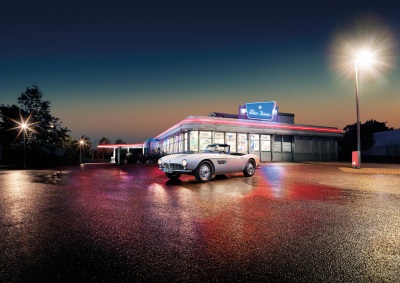 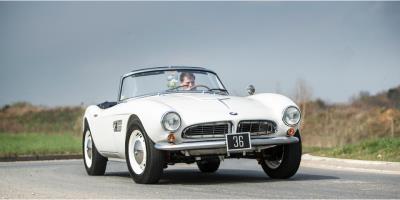 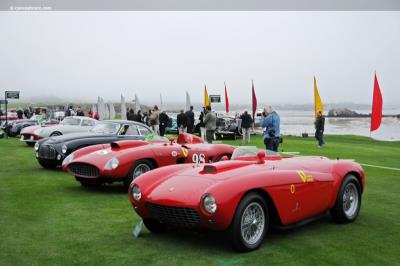 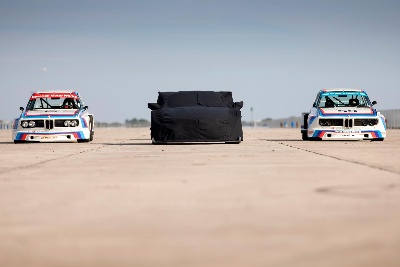