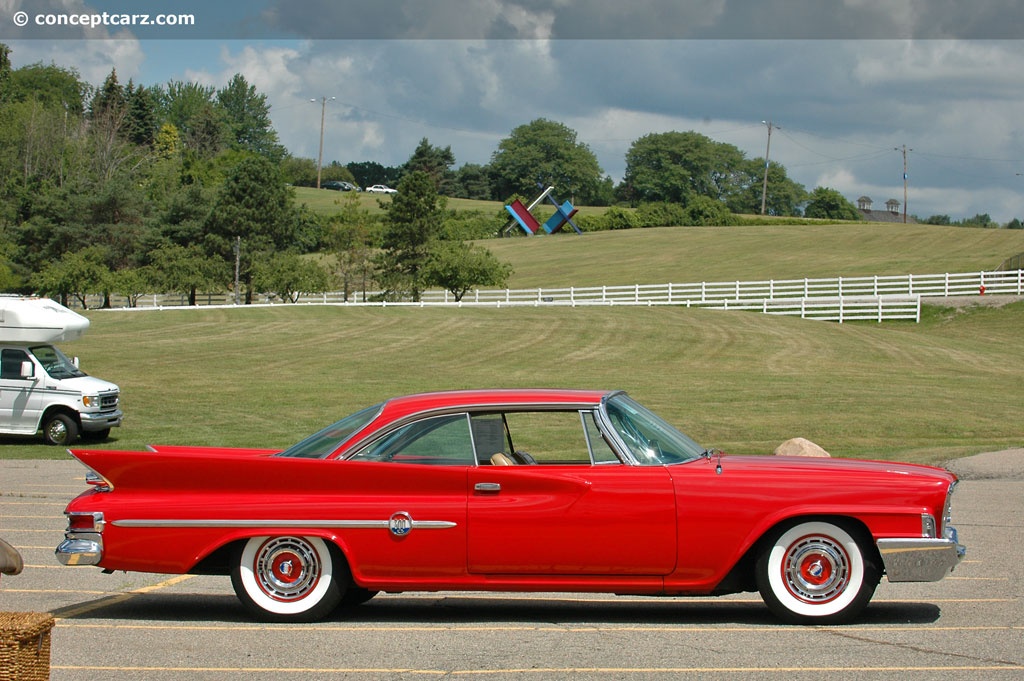 Chrysler introduced the 300 model series in 1955 and was based on the luxurious New Yorker coupe. This new model showcased Detroit's emerging styling and horsepower trends that would continue into the late 1960s. The industry-high 300 horsepower was fitted into a sporty full-size body design; by 1961 the 300G was producing 375 horsepower from the Golden Lion V8. The engine displaced 413 cubic-inches and was given twin Carter Type AFB four-barrel carburetors located on opposing plenums set a specific 30-inch distance from the intake valve, which subsequently created 'sonic supercharging' at a given RPM level. The engine had a 10.1:1 compression and forged-steel crankshaft.

Bodystyles included a hardtop coupe priced at $5,400 while the convertible sold for an additional $400. 1,280 examples of the 300G coupe were built and just 337 of the convertible.

Styling changes for 1961 were similar to the other Chrysler model changes. The 300G would be the final Chrysler with fins, bringing an end to an era. Nineteen sixty-one would also be the last year the 'Letter Series' cars would be exclusive. In 1962, the 300 line was expanded to include less expensive, non-letter 300 cars that included a four-door body style.
by Daniel Vaughan | Apr 2019

The Chrysler 300G was the last three hundred to wear Virgil Exner's fins. Major differences from the previous years model included a new front end with canted quad headlamps and a new rear treatment, which lacked the fake continental spare of the 300....[continue reading]

The Chrysler line introduced the so-called 'Letter' cars in 1955, with the 300 Series. These provided brute power in a luxury car and continued through the 50s and into the 60s. The Chrysler 300s from 1955 through 1958 were powered by hemi engines (3....[continue reading]

The Chrysler 300 letter-series cars were full-size grand touring machines made famous by Karl Kiefhaefer, whose racing teams successfully campaigned the 1955-56 versions on the NASCAR circuit. The production cars appealed to affluent enthusiasts who ....[continue reading]

Chrysler introduced the 300 letter series cars in 1955. They were high performance luxury cars and 300 referred to the horsepower of the first year's engine. Each year thereafter used a subsequent letter excluding the letter i. Production ceased in 1....[continue reading]

In 1955, Chrysler introduced the 300 as part of Virgil Exner's all-new lineup of high style cars with thrilling performance. The 300 had a 331 cubic-inch Hemi V-8 engine that offered 300 horsepower. it would soon become legendary in racing, winning, ....[continue reading]

The Chrysler 300G was priced at $5,411 in 1961 and was one of the most desirable cars available at the time. Weighing in at 4,260, the 300G equipped with the standard TorqueFlite automatic transmission and a 3.31 rear end ratio could race from zero ....[continue reading]

This 1961 Chrysler 300 G Coupe is painted in Mardi Gras red and is one of 1617 Hardtops & Convertibles produced. Around 340 remain in modern time. This car is powered by a 413 cubic-inch Wedge-Type engine that offers 375 horsepower and 495 foot-pou....[continue reading]

This Chrysler is powered by an overhead valve V8 displacing 413 cubic-inches and offering 375 horsepower. Coupled to the three-speed automatic transmission, it is capable of 135 miles per hour. The engine in this car has been rebuilt back to factory ....[continue reading]

This 1961 Chrysler 300G Convertible is presented here in factory Mardi Gras Red with tan leather interior and power top. Only 355 of these models were made. This car featured Chrysler's 413 cross-ram inducted engine. It was the last year of the long ....[continue reading]

It was a different era. Gas was cheap, the country was optimistic, and three martini lunches were the norm for businessmen of a certain social status. The Chrysler 'letter series' cars capture the spirit of that era perfectly.....[continue reading]

This Chrysler 300G Convertible is finished in Mardi Gras red with tan leather interior and top. It is one of 355 in this bodystyle produced in 1961. It has the 413 cross-ran inducted engine, power engines, power windows, push button transmission, pow....[continue reading]

This Chrysler 300G hardtop was one of 1,280 examples of this body style produced in 1961. It has the 413 cubic-inch Wedge Head engine offering 375 horsepower mated to a Push button TorqueFlite automatic transmission. It is finished in Alaskan white w....[continue reading]