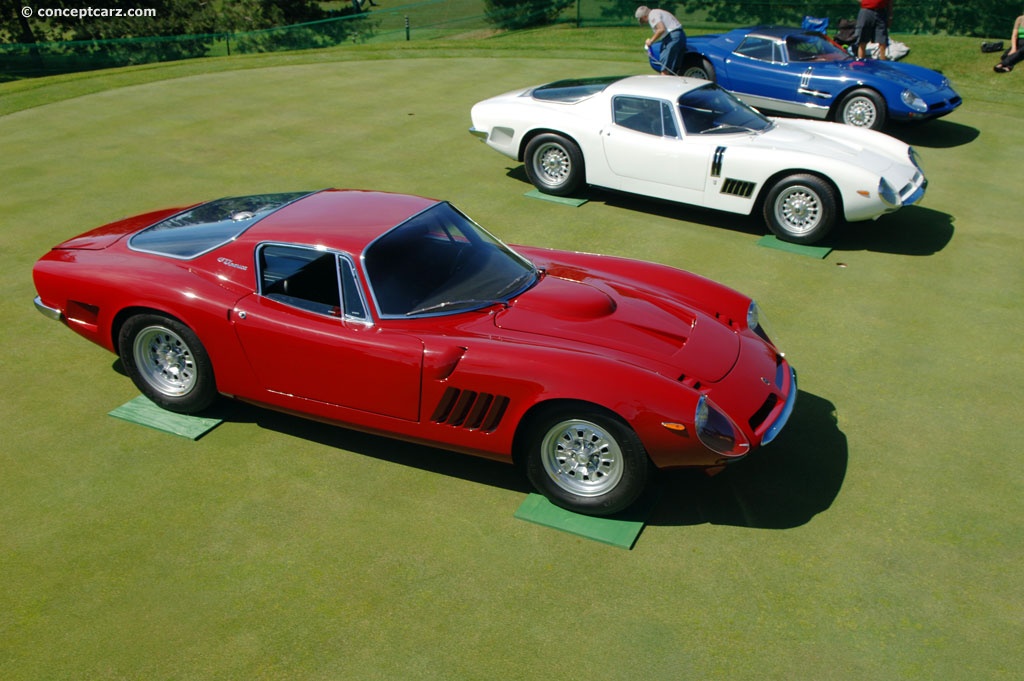 Giotto Bizzarrini, a former Alfa Romeo, Ferrari, and Iso engineer, founded the Bizzarrini company in the 1960s. Between 1964 and 1968, Bizzarrini produced the Strada, a gran turismo automobile powered by a Corvette engine small-block 327 CID engine that offered 365 horsepower in street form. Approximately 120 examples of the GT 5300 Strada (also known as the 5300 GT and 5300 GT Strada) were built.

The Bizzarrini Strada was similar to the limited production grand tourer Grifo automobile manufactured by Italian Iso Autoveicoli S.p.A. between 1965 and 1974. During the planning stages, Bizzarrini even used the Grifo name, as well as the Rivolta 300 welded unibody platform.

Bizzarrini had teamed up with Renzo Rivolta and his Iso Company in 1962 with the purpose of building sports cars. Bizzarrini was tasked with developing the platform chassis for the Iso Rivolta 2+2 coupe and with fine-tuning the Iso Grifo A3/L into a proper competition car. The A3/L, and later the A3/C, rested on a shortened Rivolta platform chassis and employed the double-wishbone front suspension and DeDion axle.

The engine was placed behind the cockpit, as far back in the chassis as possible, creating as little frontal area as possible and to achieve optimal weight balance. Piero Drogo at Sports Car Moden was commissioned to create the trademark riveted aluminum body for Bizzarrini. After being displayed at the Turin Auto Salon in 1963, the A3Cs took part in several races, including the 12 Hours of Sebring, the 24 Hours of Le Mans and the 1,000-km race at Nurburgring. A total of 29 cars would be built.

Around mid-1965, the Bizzarrini and Rivolta relationship was coming to an end. Bizzarrini wanted to improve upon the A3/C Stradale while Rivolta wanted to put it into series production. After the partnership fell apart, Iso continued to deliver parts and Bizzarrini was unable to use the Grifo name. Instead, they were marketed as the Bizzarrini 5300 GT, with the racing versions known as 'Corsa' and the road going versions as 'Strada.' The 'America' model was soon added to the lineup, wearing a fiberglass body and a double-wishbone rear suspension.

The Strada wore a Giorgetto Giugiaro influenced Bertone styled aluminum body in coupe form. A single spyder version was built. Dunlop disc brakes at all four wheels provided the stopping power. The suspension was comprised of a de Dion tube rear setup and the engine was mated to a Borg-Warner T-10 four-speed manual transmission.

Bizzarrini's competition efforts soon focused on the mid-engined P538 models. Three examples were made with the 'spider' body with one being powered by a Lamborghini V-12. The other two cars were powered by Chevrolet Corvette 5.3-liter V-8 engine that led to the model designation 'P538.'
by Daniel Vaughan | Mar 2020

Bizzarrini began his career by working with Alfa Romeo. His expertise and skills were quickly realized and his abilities were promising. Later in life, he began working for Ferrari where he was given the responsibility of development of the 250 GTO. Near the end of 1961, he left Ferrari and became a consultant driven by desires to build automobiles that would outdo his former employer. Lamborghini....
Continue Reading >>

Bizzarrinis resume included working for the legendary Ferrari and Lamborghini marques, and when he began producing cars bearing his own name, these two marques became his top competitors. The first car to bare his name was the 5300, created in collaboration with Giugiaro at Bertone and Renzo Rivolta, who were working on creating the Iso Rivolta 300 at the time. The Rivolta 300 had a Corvette....
Continue Reading >>

This Bizzarrini 5300 GT America is one of seven fiberglass bodied cars out of approximately 100 cars produced in this body style by both Iso and Bizzarrini.....[continue reading]

This 1967 Bizzarrini 5300 GT America with chassis number 0246 is the only Bizzarrini produced with a Chevrolet Big-Block 7.0-liter engine. The 502 horsepower engine is mated to a five-speed manual gearbox. In 1991 it was sent to Italy to have a res....[continue reading]

1967 Bizzarrini 5300 GT Strada Alloy is a rare alloy-bodied example originally owned by Carey Loftin. Loftin was a long-running Hollywood actor and stuntman who gained fame for his work as the stunt coordinator for the car chase sequences in Steve Mc....[continue reading]

Giotto Bizzarrini is best known for his work on the Ferrari 250 GTO and the Lamborghini Miura V12, but his actual name is emblazoned on the beautiful Italian supercar, the Bizzarrini 5300 GT Strada. ....[continue reading]

Bizzarrini was an Italian automotive manufacturer founded in the 1960s by Giotto Bizzarrini, a former Alfa Romeo, Ferrari and ISO engineer. The Strada was a gran turismo automobile produced by the company between 1964 and 1968. It was powered by a Ch....[continue reading]

During the late 1950s, Richie Ginther would begin a relationship with John von Neumann and this partnership would result in one of the most dominant periods of American sportscar racing in which Ginther...
5300
P538