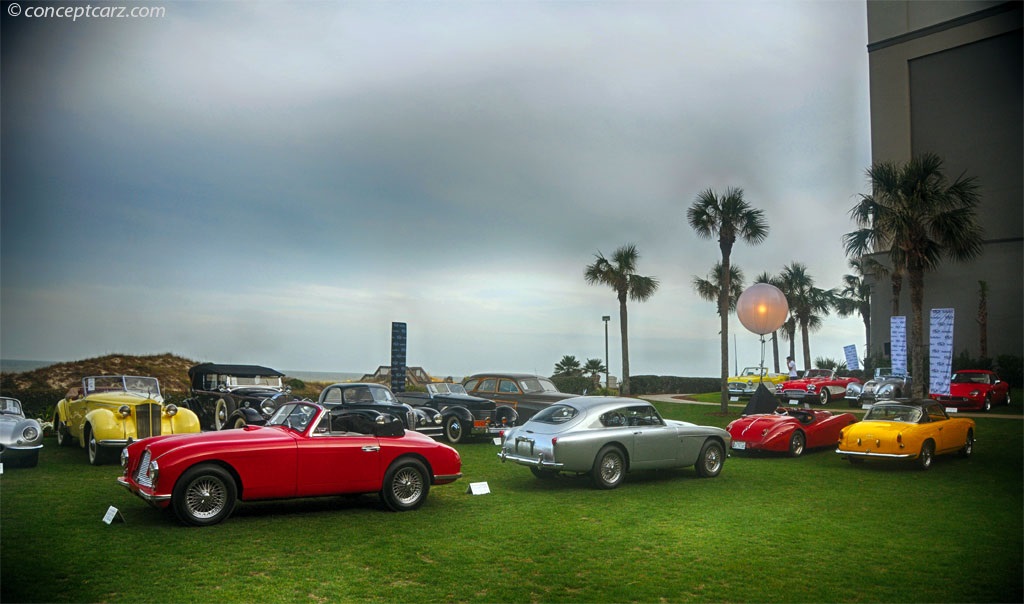 Aston Martin launched the DB2 in 1950 and was the first in a long line of DB grand tourers and high-performance sports cars. David Brown had acquired Aston Martin and Lagonda in 1948, the latter for its straight-six engine which would power the new model to third in 1949's Spa-Francorchamps 24 Hours. Wearing Frank Freeley-designed sports saloon coachwork, the two-seater body was a drastic departure from any previous Aston and featured curvaceous lines that were modern and elegant, the whole front of which hinged forward. A young racing designer named Ted Cutting later reworked the design which was installed on Claude Hill's revolutionary Atom chassis and powered by the LB6-designated 2,580cc twin-cam engine.

Hill's cross-members were substituted with a cruciform structure that reduced ground clearance and weight as well as increased torsional rigidity. The front independent suspension was comprised of coil springs and transverse torsion bars, while the rear used a live rear axle with coil springs, parallel arms, and Panhard rod. Stopping power was by hydraulically powered drums. The 105 horsepower produced by the engine was transmitted through a four-speed David Brown gearbox, with zero-to-sixty mph taking 12.4 seconds and having a top speed of 110 mph. The Vantage engine boosted power even further to 125 bhp.

Sales of the DB2 were hindered by the limitations of minimal luggage space and only two seats. Freeley reworked the design, adding an occasional double beach in the rear which folded down to increase carrying capacity. The roofline was slightly raised to increase headroom and larger rear windows were added in an opening lid. The other pieces of glass were also redesigned with the windscreen being a single rather than two-piece moulding, and the quarterlight windows were reshaped. The car's overall length increased by six inches, bumpers became more substantial and incorporated over-riders, and the headlights repositioned higher in the bonnet. These modifications resulted in a new name, the 1953 DB2/4, and was the world's first genuine GT hatchback.

Production of the DB2/4 continued from 1953 until 1957 and was available as a drophead coupe, a 2-seat Fixed Head Coupe, and a 2+2 hatchback Saloon. A few examples wore Bertone bodied spider coachwork. The DB2/4 MK II model was introduced in 1955 and came with optional high compression, large-valve 165 horsepower engine. Exterior modifications included additional chrome, bubble-type tail lights, and small tailfins. A 2-seat Fixed head Coupe body style was added, in addition to the Drophead. 199 examples of the Mark II were built with 34 fitted with the new coupe body. Three Mark II chassis wore spider coachwork by Carrozzeria Touring.

In early October of 1956, chassis number M300/3A/1300, codenamed Design Project 193, was completed. It would form the basis of the DB2/4 Mark III, commonly referred to as the DB Mark III. Significant changes included a more modern-looking radiator grille similar to the one used on the production DB3S sports-racing model, and a sculpted bonnet. The Mark II's chrome stripe above the windscreen was removed, and the rear quarter-light windows could now be opened. The instrumentation was now positioned within a hooded binnacle behind the steering wheel, its shape resembling that of the radiator grille.

The 2,922cc VB6 twin-cam engine was completely redesigned by Aston's chief designer, Tadek Marek, with a new crankshaft, cylinder head modifications, and a new and strengthened cylinder block. Many of these changes were inspired by the DB3S, resulting in 162 horsepower at 5,500 RPM and 180 lb/ft at 4,000 RPM. Zero-to-sixty mph was accomplished in 9.3 seconds and the top speed was 120 mph. The optional 178 bhp version with twin exhaust pipes was also offered. Front disc brakes were standard rather than optional after the first 100 cars had been built, commencing at chassis '1401'. There were modifications to the clutch and gearbox, a Laycock overdrive became available.

The total hand-built DB Mark III built at the company's Feltham works reached 551 examples during their relatively brief production run, including one purpose-built competition model. Built between March of 1957 and July of 1959, most were saloons with 55-percent exported. 85 DB MkIII drophead coupes were built, the most expensive of the three body styles offered by Tickford, with 14 receiving the DBD 'Special Series' engine.

The Aston Martin DB MkIII drophead coupe played a starring role alongside James Bond, appearing in Ian Fleming's novel 'Goldfinger', though by the time the book made it to the screen the DB5 was the current model, so that was used instead.
by Daniel Vaughan | Jun 2020

The DB name came from the name David Brown (later Sir David Brown), an individual who had purchased the Aston Martin Company. The DB series was built from 1950 through 1953 with only 411 examples being produced. Power was supplied by a W.O. Bentely designed Lagonda six-cylinder engine that was capable of producing 116 bhp and could propel the car to a top speed of 117 mph. The zero-to-sixty time....
Continue Reading >>

The DB 2/4 Mark III, commonly called simply the DB Mark III, was introduced early in 1957 as the successor to the DB2/4, and it continued through 1959 as the DB Mark IIIB. The Newport Pagnell coachbuilder Tickford built the bodies for the DB 2/4 afte....[continue reading]

Some things are just too good to part with, or, touch for that matter. Some things, despite the incredible urge to take and touch and feel, are just better appreciated by what the eyes take in. The beautiful lines of the 1958 Aston Martin DB MK IIIA ....[continue reading]

Aston Martin had derived its name from Lionel Martin and from Aston Hill near Aston Clinton in Buckinghamshire. Aston Martin would be founded in 1913 with the help of Robert Bamford and would begin life selling Singer automobiles on Callow Street in ....[continue reading]

Aston Martin built 551 examples of the DB Mark III during its three-year run, lasting from 1957 through 1959. These were hand-built vehicles and approximately 310 were exported to the United States. ....[continue reading]

This Aston Martin DB2/4 Mk III was first sold by importer J.S. Inskip on October 6th of 1958 to James Gillespie Dale, in Rochester, New York. It soon found its way to California and into long term ownership. Years later it was sold to Japanese collec....[continue reading]

The Aston Martin DB MKIII was designed to replace the aging DB2/4 and represented the final evolution of the David Brown Aston Martins. They wore coachwork by Tickford with the most notable visual differences of their predecessors were the DB3S style....[continue reading]

With only 551 of this model manufactured it is renowned for introducing the now iconic Aston Martin grille shape, echoed in the instrument binnacle as penned by famed designer Tarek Marek. This car is particularly rare as one of 47 with the DBD tripl....[continue reading]

David Brown had an agenda when he made the move to unite Aston Martin and Lagonda. He had a vision. Unfortunately, the engine he had available to power that vision wasn't enough. Lagonda held the key to what would become an icon of the British automo....[continue reading]

The Aston Martin DB2 was introduced in 1949 in prototype form. It was powered by a twin-cam six-cylinder engine and wore aluminum bodywork that could be had in either drophead or coupe body styles. The DB2 was followed by the DB2/4, in reference to t....[continue reading]

The DB2/4 MKIII is the last of the series of DB2's from the Aston Martin company, built between 1950 and 1958. Notice that the grille design differs significantly from the previous model, the DB2/4, and it was this new grille design that was carried ....[continue reading]

This Aston Martin DB2/4 Mk III was a factory demonstrator that was first privately owned by Carroll Shelby. When Mr. Shelby acquired it in 1958 he was driving professionally for the David Brown Racing Department. He acquired the Mark III for around h....[continue reading] 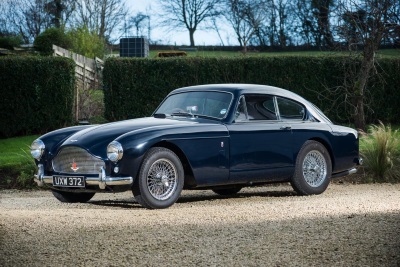 A very special 1958 Aston Martin DB 24 Mk III, owned by the same family for nearly six decades, is set to go under the hammer in Silverstone Auctions classic car sale at Race Retro on the 27th-28th February. Offered for sale for the first time since...

The 20th edition of the Bonhams Aston Martin Sale, the leading European auction dedicated to the Aston Martin and Lagonda marques, will be staged for the first time at the renowned Wormsley Estate in the Chiltern Hills of Buckinghamshire, on Sunday 19th...
© 1998-2021. All rights reserved. The material may not be published, broadcast, rewritten, or redistributed.