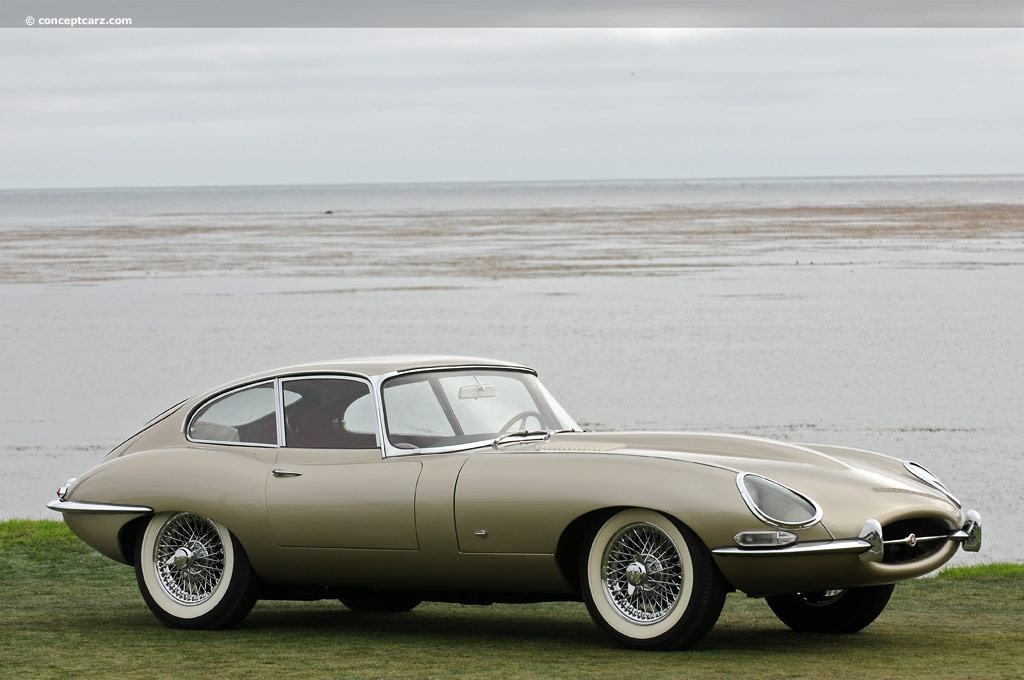 The E-Type was a civilized road-going version of Jaguar's LeMans-dominating D-Type and was capable of 150 mph straight out of the showroom. Introduced in 3.8-liter form in 1961, the Jaguar E-Type (XKE in the USA) has a double-wishbone, independent front suspension mounted on the forward sub-frame that supported the engine. In the back, the suspension broke new ground for a large-capacity sports car, being independent when most of its major rivals relied on the traditional live rear axle. In a similar fashion to the D-Type, the monocoque tub formed the main body/chassis structure while a tubular spaceframe extended forwards to support the engine.

Dunlop disc brakes were placed on all four wheels, with the ones at the rear being mounted inboard alongside the differential to reduce un-sprung weight. The same 3.8-liter, triple-carburetor, 'S' unit first offered as an option on the preceding XK150, was installed in the E-Type. The engine produced 265 horsepower and because the E-Type weighed 500 lbs less than the XK150, and with the knowledge gained by aerodynamicist Malcolm Sayer on the D-Type, the E-Type offered exceptional performance. The only area where the new E-Type did not represent an improvement over the XK150 was the durable four-speed Moss gearbox, which it retained.

The E-Type design was influenced by the C- and D-Types, but it was not designed in a wind tunnel. Instead, Sayer sculpted it from talent, instinct, and mathematical formulae.

During the development process, Lyons authorized a coupe version, which was later selected to be the debut car at the Geneva Motor show in March 1961. Due to the accelerated schedule, the pre-production coupes were handmade from roadster bodies. In the months following Geneva, Jaguar completed the tooling or the coupe's body panels while the production of the roadster was already in full swing.

The early E-Types were criticized for not having adequate interior space for taller drivers, which was resolved in February of 1962 with the introduction of a foot well, along with other minor modifications. Cars produced prior to February of 1962 are known as 'flat floor' 3.8-liter cars with welded-louver and outside latches. Of the first 500 Jaguars produced with outside bonnet latches in 1961, 385 were left-hand-drive roadsters and 20 were fixed head coupes. An additional four coupes were built with right-hand-drive configuration. Of the twenty LHD examples, only 18 left the factory as 1 was destroyed by the factory and number 7 burned while still there. Currently, there are 12 known surviving left-hand-drive cars from this group.

The E-Type was immensely popular and the small Jaguar factory was behind on orders for the next four years, which meant there was little reason to make major changes to the design until 1965.
by Daniel Vaughan | Feb 2020

The Jaguar E-Type sports car made its debut at the 1961 Geneva Motor Show where the company proved to the world once again that they could build an incredible performance car with equally impressive appearance. Even Enzo Ferrari agreed, remarking tha....[continue reading]

This E-Type Fixed Head Coupe is the 1961 New York Auto Show coupe and it sat alongside three other E-Types. Standing beside it initially was model Marilyn Hanold - although she was urged to move out of the way by the photographers. Chassis number 885....[continue reading]

The Jaguar E-Type ranks among the most famous cars in the world. For many auto fans, its shape remains to this day a stunning synthesis of athleticism and delectable design language. But beyond the features it shares with all its sibling production m....[continue reading]

This Jaguar E-Type, chassis number 88005, was the car first revealed to the European press by Jaguar boss Sir William Lyons on March 15th of 1961, at the Restaurant du Parc des Eaux Vives in Geneva. The car then appeared at the Geneva Auto Salon, and....[continue reading]

The Jaguar E-Type was designed by Malcolm Sayer and William Lyons, and used many of the D-Type styling cues, this time in steel. The first example was driven directly from England to the 1961 Geneva Salon by Jaguar tester Norman Dewis. The hood was o....[continue reading]

This Jaguar Open Two-Seater was the 323rd E-Type roadster built. It is finished in British Racing Green over a Suede Green leather and destined for the US market. It has spent most of its existence in the Northeast. Since new, the car has undergone a....[continue reading]

This is a very early E-Type Roadster, with flat floors, external bonnet latches, and welded bonnet louvers. It was the 138th example built and the first E-Type sold in Pennsylvania. The car was given a restoration in the early 1990s and at the time, ....[continue reading]

This Jaguar XKE E-Type is an early production car built on November 13th of 1961. Since new, the car has been comprehensively restored to high standards. Upgrades include a Pertronix electronic ignition and performance coil, a CoolCat six-blade fan, ....[continue reading]

This Jaguar E-Type Roadster was ordered new at the 1961 Paris Salon by Maclean's magazine editor Ralph Allen. It is an early example that has the hard-to-find external bonnet-latch. It is finished in Opalescent Bronze and was dispatched from the fact....[continue reading]

This 1961 Jaguar XKE Series 1 Flat Floor Fixed Head Coupe was was originally dispatched on October 12, 1961 and delivered to its original owner on December 15, 1961. Its first owner was A.S. Flagg of Los Angeles, California.....[continue reading]

This car was the 18th left hand drive outside latch coupe built of only 20 total. Only 13 are known to exist. Only three are reported to have the original engine and drive train, two are in Europe. The Sport Clips Collection purchased this example in....[continue reading]

This Jaguar E-Type Series 1 3.8-Litre Roadster was completed on November 27th of 1961 and was dispatched to Jaguar of Eastern Canada in Montreal on December 7th. It left the factory finished in Cream over black interior and fitted with a black conver....[continue reading]

The 96th left-hand drive E Type to leave the production line at Jaguar's legendary Browns Lane factory went on to become a prolific racer at Daytona International Speedway and Sebring International Raceway. It made four starts in the 12 Hours of Sebr....[continue reading]

This 1961 Jaguar E-Type Series 1 3.8-Litre Roadster has recently received a comprehensive restoration to show specifications. The body was brought to bare metal, and the chassis was media blasted. The original engine, gearbox, and rear axle were over....[continue reading] 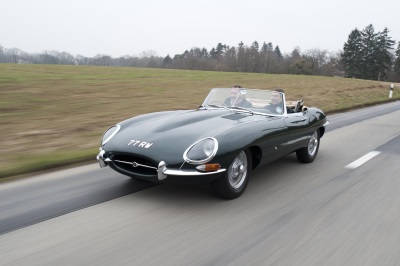 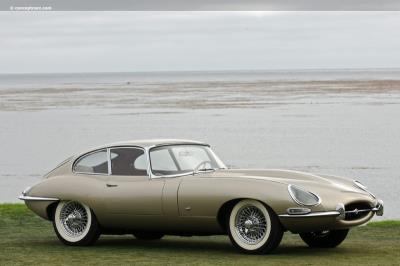 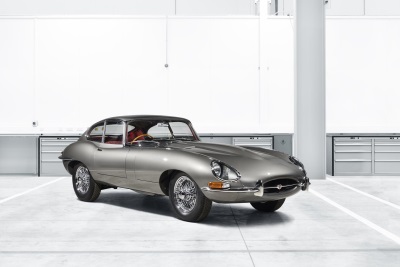 One of Italys most famous marks, and perhaps most troubled, the trident-bearing automaker continues to provoke passion through its search of excellence. Five brothers would come together in December...
© 1998-2020. All rights reserved. The material may not be published, broadcast, rewritten, or redistributed.