Suggested vehicles
Specification comparison
Related news
With the introduction of the automobile, much was not known. Designs, amenities, logistics, and mechanical capabilities were all still be analyzed. Improves were rapid in all areas of the motor-car. The invention of the electric starter during the mid 1910's meant that the combustion engine would grow rapidly in popularity. Up to that point, it was still unclear in which source of power would become the most popular. Steam, electric, and combustion engine were being experimented with by multiple builders. The electric and steam powered vehicles were popular with ladies. They were easy to start and quiet to operate. The steam powered vehicles took about thirty minutes to create the steam to produce motion. The boilers were also prone to blowing up. Electric vehicles were easy to start, quiet to operate, and clean. Their shortcomings were in the length of operation before requiring a re-charge. Top speed on both the steam and electric powered cars were also questionable. The Stanley-Steamer Rocket did travel 127.7 miles-per-hour on January 26th of 2006 at Ormond Beach in Florida. The driver became the first person to traverse two miles in less than a minute. The vehicle was hailed as the 'Fastest Car in the World.' Starting an internal combustion engine was dirty and dangerous. The starting crank had a reputation for breaking arms. Turning the crank, then running back into the drivers seat to make the appropriate adjust on levers to keep the engine in motion was not very 'lady like.' The invention of the electric-starter meant that the combustion engines shortcoming were being addressed and its true potential could be explored more economically. This is a very early electric vehicle with seating for two. There is no steering wheel, rather a tiller was used for steering purposes. The 'engine' sat in the rear of the car and powered the rear wheels via chain. The occupants were exposed to the elements. The wood body was merely a means to house the engine and carry the occupants – it was very functional and not that impressive to the eye. Still, any automotive technology during the late 1890's is rather impressive.
By Daniel Vaughan | Dec 2006 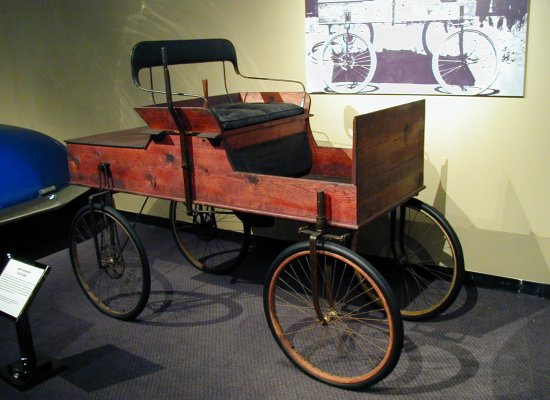