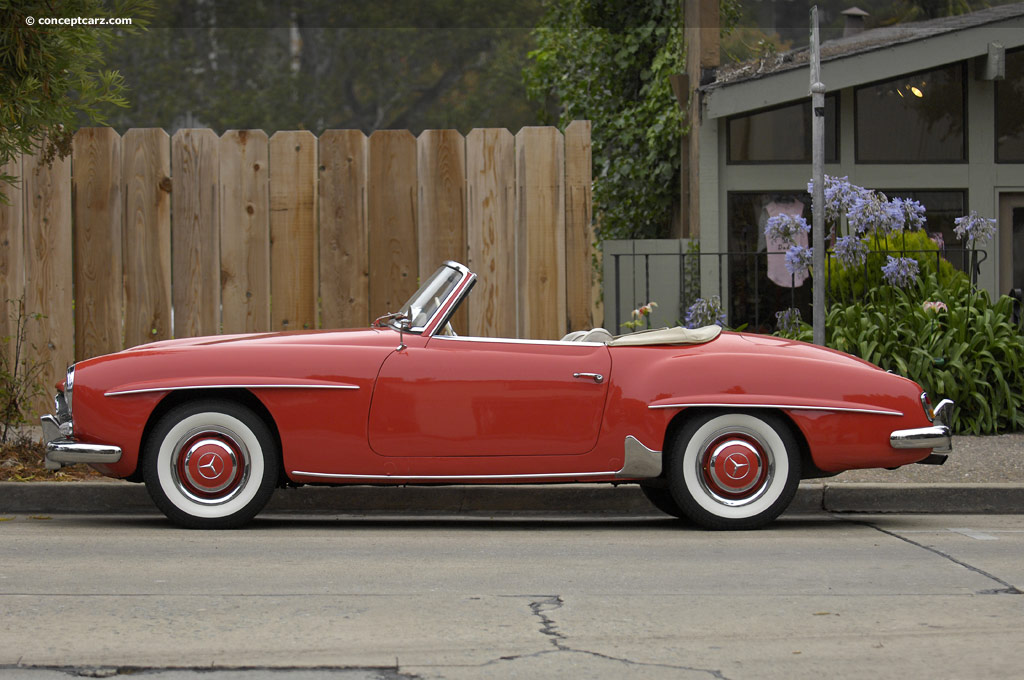 Max Hoffman was responsible for the sporty two-seat Mercedes-Benz 190SL sports car. The S represented 'Sports' while the L meant Light, or 'Sehr Leicht'. With a curb weight of 2560 pounds, it was hardly 'light' when compared with other vehicles in it class, some 500 through 1000 pounds less. It was however an excellent alternative to the higher-priced Mercedes-Benz 300SL. The gullwing-door 300SL was available only as a coupe while the 190 SL could be purchased as a Roadster with a soft top convertible or with a removable hardtop roof.

In 1954, Mercedes introduced its two-door 190SL at the New York Auto Show. Fifteen months later the production version was displayed at the 1955 Geneva Auto Show. Gone was the air-scoop that had been on the hood, along with other aesthetic aspects.

Under the hood was an 1897 cc four-cylinder OHC engine that was capable of producing around 105 horsepower. It took 14.5 seconds to go from zero to sixty and had a top speed of nearly 110 mph. Drum brakes were placed on all four corners of the 14 foot, one inch vehicle. Servo brakes were optional until 1956 at which point they became standard.

The engine capacity was taken into account when naming the vehicle. By moving the decimal place once to the left, it created 189.7. The number was then rounded up to 190. So the 190 represents the approximate engine capacity in liters, meaning about 1.9 liters.

The 190SL production run lasted from 1955 through 1963. Most of the body-styles were open roadsters the rest were coupes. In comparison to many other nameplates, this is a very low number, guarantying its exclusivity and rarity in today's standards. It was a beautiful sibling to the prestigious and awe-inspiring gullwing door 300SL.
By Daniel Vaughan | Sep 2006

Between 1955 and 1963, fewer than 26,000 examples of the Mercedes-Benz 190SL were produced with many of those being sent to the United States. They were built alongside their race-bred sibling, the 300SL. The 190SL was a less expensive version and ba....[continue reading]

Conceived for the American market, the Mercedes-Benz 190SL was given many advanced engineering features including four-wheel drum brakes, a single overhead-camshaft four-cylinder engine, conventional doors, and a swing axle rear suspension. It was a ....[continue reading]