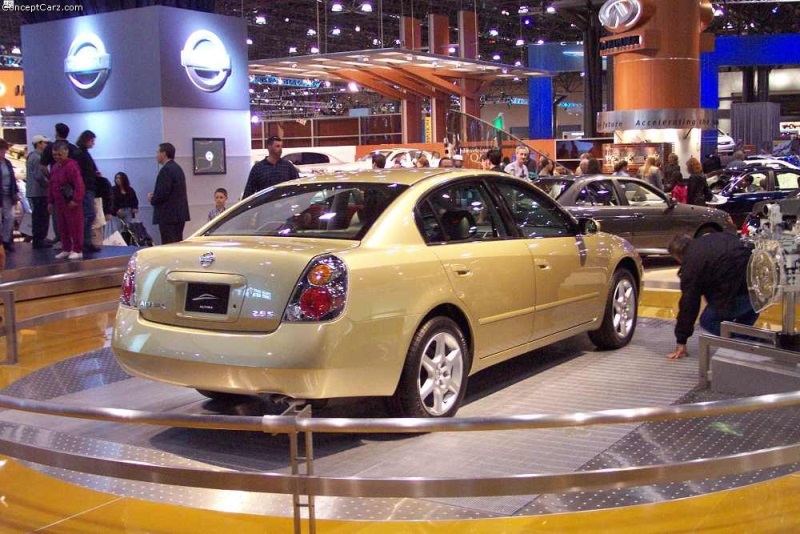 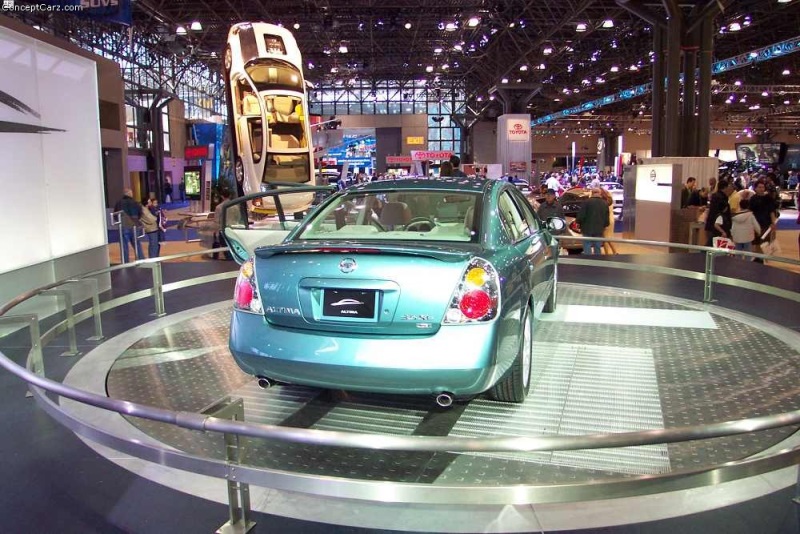 The name 'Altima' originally referred to a trim line of the Nissan Laurel mid-size car sold in Central America and the Caribbean before 1992. In 1993, Nissan discontinued the Stanza line, replacing it with the Ú.S.-made Altima. The very first Altima rolled off the assembly line in Smyrna, Tenn., in June 1992, as a 1993 model. All Altimas were built in Smyrna until June 2004, when Nissan's Canton, Miss., plant began producing additional Altimas to meet high demand.

Initially, the car's official name was 'Stanza Altima.' 1993 models can be seen with a sticker reading 'Stanza' in small lettering to the left of the ALTIMA emblem on the trunk lid. Though the Stanza name was there more for regulatory compliance than a lack of confidence in renaming the middle vehicle in Nissan's longstanding Sentra-Stanza-Maxima three-sedan lineup, there were concerns at the time about the public's acceptance and ability to pronounce the new Altima name - enough that guidelines were distributed explaining the proper syllable emphasis. The concern was ill-founded, as Altima had an almost immediate impact on the mid-size sedan segment, which at the time was dominated by the Honda Accord and Toyota Camry.

The base XE (rare) had manual windows. The mid-line GXE had power windows, a power retracting antenna, pass thru rear armrest, digital clock in dash, and color matched plastic speaker grilles for the rear 6-inch speakers. The XE and GXE models only had the fixed intermittent wiper switch.

In addition to the GXE features, the SE had a stiffer suspension, fog lights, 3-leg mount rear spoiler, side skirts and sport seats (plus a standard sunroof in 1994-1995). It also had 4-wheel disc brakes, which came on the other trim lines when antilock brakes were ordered.

The GLE's enhancements included a digital head-up display (1993 and 1994 only), which displayed speed in mph or km/h, turn signals, and various warning lights on a unique mirrored patch made into the windshield. Other features included a coin holder built into the fuse panel cover (1993 and 1994 only), adjustable lumbar support on the front seats, automatic digital climate control, keyless entry with alarm (optional), floor mats, color matched side mirrors, cornering lights, sunroof, and a higher-powered six-speaker cassette/CD stereo which included 6X9 rear speakers with black metal 'active speaker' grilles. For 1997 it gave up all of the above in exchange for standard leather (previously optional). All SE and GLE models had alloy wheels and variable intermittent wipers.

The 1993 Altima came with a rosewood colored dash trim and only had a driver's side airbag coupled with automatic shoulder belts. The 1994 Altima gained a darker burl wood dash trim, a flush mount passenger airbag and regular seatbelts. The 1995 model year also brought a new venetian blind-like grille, new taillights (red and clear), and a new 2 leg mount spoiler with a red LED brake light for the SE. Nissan added new wheel covers for base models in 1996. In 1997 the GXE gained a new 'Limited Edition' package including alloy wheels, keyless entry, alarm, floor mats, and a Limited Edition sticker on each side near the front wheels. The majority of final-year Altima models were dubbed '1997.5' models, signifying the added crash protection necessary to meet 1997 side-impact standards. ( posted on conceptcarz.com)Second Generation 1998- 2001

The second generation Altima followed in 1998 and was produced through the 2001 model year. Once again designed in California and manufactured in Tennessee, it had more power (155 hp by 2000) and a more responsive driving feel. It also offered a much more comfortable interior, a higher quality feel and additional equipment options. For 2001, the first Limited Edition model was introduced, which would become an important part of Altima's value pricing strategy in the years that followed.

The second generation (chassis model L30) was an American market-only version, again styled by Nissan's California design center. A new interior brought a revised glove box and cup holders, a folding back seat (except on XE), and depowered airbags.

While total volume remained identical at 108 cubic feet (3.1 m3), most felt it was distributed better and resulted in a slightly roomier-feeling cabin.

Trim lines were the entry XE, volume-selling GXE, sporty SE, and luxury-trimmed GLE. The SE can be distinguished by its body-color grille, fog lights, rear spoiler, alloy wheels, and white-faced gauges. In this generation of Altima, all GLEs had leather seats standard.

The majority of changes came for the 2000 model year. The engine increased in power from 150 to 155 hp, while it also improved the 0-60 mph time from 8.7 to 8.4 seconds. The Altima grew slightly longer and got a deeper front grille, one-piece headlamps with turn signals, all-red taillights, and plastic trim on the decklid. Side airbags were newly standard on GLE and available on GXE and SE. For 2001, the Altima GXE again gained a Limited Edition package: power driver's seat, keyless entry with alarm and floor mats.

While the first two generations of Altima laid the foundation - and were very successful compared with the previous Nissan Stanza - the third generation really put Altima on the map and customer shopping lists.

It was the first mass-market product built on Nissan's new FF-L platform, which was unique to North America and had no equivalent model in Japan. It was produced in model years 2002 through 2006. This new design had up to 18-inch wheels and was the first Altima series to offer a 3.5-liter V6 in addition to its 2.5-liter 4-cylinder engine. The Altima grew substantially for this generation, as interior volume expanded to 118.8 cubic feet. The Altima's interior dimensions even surpassed that of the higher-end Maxima, so the 2004 Maxima moved more upscale into the full-size bracket. The new Altima also featured improved handling and more aggressive styling. Reviews were consistently strong by media and consumers alike as the Altima helped lead Nissan's product resurgence in the early part of the new century.

'The concept behind the third generation Altima styling and engineering was simple - stop copying Accord and Camry, as we had been doing, and carve out fresh territory of our own,' explained Nissan Sales and Marketing VP, Al Castignetti. 'We brought the 2002 Altima to market under the banner of 'The Cure for the Common Sedan,' letting people know that they could continue to blend in with the crowd, or stand out with Altima's more aggressive styling and driver-rewarding performance.' With this vehicle, Nissan found its own identity in the mid-size sedan segment, which continues to drive its popularity today.

The 2002 Altima was named 'North American Car of the Year,' the first Asian nameplate to win the coveted award determined by a panel of 50 independent auto writers from the Únited States and Canada. It was also named 2002 'Best of the Year' by MotorWeek on PBS. And, for the first time the automotive media deemed that Altima was not only an alternative to the leading mid-size sedans, it was equal to or better than the longstanding sales leaders in the segment.

For 2005-2006 the Altima received a facelift, including a new front grille, all-red taillights, redesigned interior, and an optional DVD-based navigation system. The V6 was now rated at 250 hp with torque rated at 249 pound-feet, with a 0-60 mph time in just 5.9 seconds utilizing the Xtronic 5-speed transmission. (posted on conceptcarz.com) Also new was the SE-R model with a 260 hp and 251 lb ft of torque version of the V6, a 6-speed manual transmission (automatic still optional), upgraded brakes, 18-inch wheels, a sport suspension and a high-flow exhaust. Topspeed.com recorded a 0-60 mph time of 5.7 seconds for the SE-R.

The third-generation Altima was well-received by the press, with many critics praising the new style and extra space, and calling it one of the most powerful and best-handling family sedans available.

The fourth generation Nissan Altima was announced at the 2006 New York Auto Show on April 12, 2006. It is the first vehicle to use the smaller Nissan D platform, with a new front and upgraded rear suspension. The wheelbase is 1-inch shorter than the third generation Altima, but interior space is mostly unchanged. The Maxima and Murano also used this new platform starting with the 2009 models.

The 2007 Nissan Altima used revised versions of the engines from the third generation model. The 3.5 L V6 engine produced 270 hp and the 2.5 L straight-4 produced 175 hp. A 6-speed manual was standard, and a continuously variable transmission replaced the traditional automatic as the optional transmission. (posted on conceptcarz.com)

The 2007 Altima sported some more recent innovations in the market, including, but not limited to, standard 'push-button start' (Called 'Intelligent Key'), Bluetooth capability for cell phones, and a parking camera. The dashboard has larger buttons for easy readability and a total of nine cup holders. For 2008, all Altima models received ABS with electronic brake-force distribution.

For the 2010 model year, the Nissan Altima was face lifted with a new front fascia, hood, and headlights, as well as new wheels and interior materials. Electronic stability control, previously only offered as part of an option package on V6 models and unavailable with 4-cylinder engines, was now standard on all Altima trims.

The fourth and current generation Altima design (2007 to present) has far outpaced all of its predecessors, offering more of just about everything - including the addition of a dramatic new Altima Coupe for the 2008 model year. Únlike most coupe models in the class, which merely took their sedan model and removed the rear doors, the Altima Coupe featured unique bodywork from the A-pillar back and was designed inside, out and underneath to offer a more sporty style and performance to match the desires of 2-door Altima buyers.

An Altima Sedan Hybrid was introduced in 2007 and continued through 2011, with availability limited to a small number of states. The Altima Hybrid powertrain mated a specialized version of Nissan's QR25 2.5-liter 4-cylinder engine and standard electronically controlled CVT with an advanced electric drive motor/generator. This combination increased fuel economy while maintaining low tailpipe emissions.

In 2012, Altima continues to provide an innovative, standard-setting combination of quality, exhilarating performance, sporty appearance and exceptional value in the mid-size sedan class. Its design is still highly distinctive, and it still offers excellent driving dynamics with competitive fuel economy - all at a great price value. On Tuesday, May 15, 2012, the fifth and most innovative generation of the Nissan Altima will be launched in Smyrna, Tenn. Stay tuned as we continue to celebrate the Altima line with details of this exciting new model!Source - Nissan