1918-1919 Studebakers were the first cars built entirely by Studebaker (earlier cars were produced in association with either Garford or E-M-F). The Big Six was the upscale model of the three new Studebakers, the others being Light Four and Light Six. The Big Six was a big car, seating seven passengers. It was popular, too - selling 11,757 in the first year of production...not bad for 1919. The Big Six was produced between 1918 and 1926. Beginning with the 1927 Model Year, the Big Six was known as the Studebaker President, and was one of the company's largest and most luxurious models. Powering the 1919 Big Six was a six-cylinder 60 horsepower engine and had a price tag of $2,000. In 1919, Studebaker sales reached $66,000,000 and had profits of $9,300,000. Studebaker began to withdraw from the horse drawn vehicle market in 191, except for some wagons.
This Big Six was purchased new in Santa Barbara, California, where it logged more than 90,000 miles in less than two years. By 1923 it had traveled over 390,000 miles, primarily on unimproved roads. This car holds the World's Record for being driven 490,000 miles in 5 1/2 years.
A United States wagon and automobile manufacturer based in South Bend, Indiana, the Studebaker Corporation, or simply Studebaker, entered into the automotive business in 1897 to create electric vehicles. The Studebaker Light Six automobile was introduced in 1918 and was produced until 1927. The car was renamed the Studebaker Standard Six in August of 1924. Both the Light Six and the Standard Six were the least expensive of Studebaker's models while in production. A large variety of body styles were available for this vehicle during its period in production. The Light Six was renamed the Studebaker Standard Six Dictator in 1927. This was in preparation for the 1928 model year when the vehicle would then be known as the Studebaker Dictator. The Studebaker Special Six was a vehicle produced by the Studebaker Corporation from 1918 to 1927 and represented their mid-range model. This model was also available in an array of body styles throughout production. The Special Six was renamed the Studebaker Special Six Commander in 1927. This was in preparation of the 1928 model year when the vehicle then be known as the Studebaker Commander.
The Model EG, or the Studebaker Big Six was also introduced in 1918 and lasted until 1926. Renamed in 1927, the Big Six became the Studebaker President. The President was the most luxurious as well as the largest Studebaker model.
The Big Six was offered from 1918 until 1920 as only a four-door touring vehicle. This was the most popular body style for vehicles at this time. Beginning in the 1921 model year the price of enclosed vehicles came down, and buyers realized the benefit of both closed and semi-closed passenger compartments and a wide variety of body styles became available. The Big Six lineup great by the 1926 model year to include the specialty body styles of the dual-cowl Phaeton and the Berline sedan.Producing 60 bhp at 2000 rpm, the Big Sixes from 1918 to 1919 were powered by Studebaker's 354 in/3 I6 engine. The engine output jumped to 75 bhp by 1926 at 2400 rpm. The wheelbase of the Big Six was enlarged to 120 inches in 1918 and in 1926 the car was made available in either short 120 inch wheelbases, or long, 127 inch wheelbases.1918 Studebaker models represented a magnanimous milestone for Studebaker because they represented a big break from the earlier legacy of E-M-F vehicles that Studebaker had previously been constructing. The Big Six President in 1928 marked the introduction of Studebaker's famous 313 in/2 V8 which produced 100 bhp at 2600 rpm.In 1954 the Studebaker Corporation was acquired by Packard Motors Company of Detroit, Michigan and became a division of the Studebaker Packard Corporation from 1954 until 1962. The company reverted to its previous name of Studebaker Corporation in 1962. Studebaker continued to survive as an independent closed investment firm until 1967 though the company left the automobile business in 1966.By Jessica Donaldson 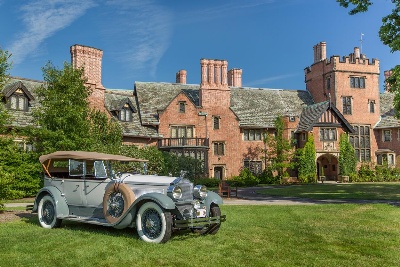 July 15, 2014 - Akron, Ohio—Stan Hywet Hall %26 Gardens, one of the nations most iconic residences arising from the American Country Estate movement of the late 19th and early 20th centuries, announces the Concours dElegance at Stan Hywet Hall...

Total 1919 Studebaker Big Six production: 0
© 1998-2021. All rights reserved. The material may not be published, broadcast, rewritten, or redistributed.