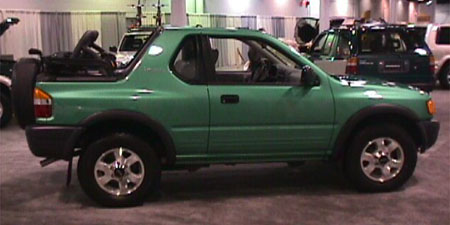 A Spanish word meaning ‘friend', the Isuzu Amigo is considered to be somewhat less friendly than its name or dimensions suggest. A two-door compact SUV sold intermittently during the 1990's, the Amigo is one of Isuzu's most popular offerings in the latter realm.
Not as refined, the ride quality was not as good as on competing car-based SUVs. The steering was slow, and the engine noise was excessive. The rear seat was also unpleasant to sit in due to the vehicle's two-door body and short wheelbase. The Isuzu Amigo was attractive looking with its sharp angles and sporty pugnacious stance. The Amigo was also quite competent off-road due to the ute's dual-range four-wheel drive and high ground clearance. A powerful V6 that provided brisk acceleration was offered on later models. Available only as a convertible in two trims, the first generation Isuzu Amigo was built from 1990 through 1994. Introduced in 1989, Isuzu's Japanese-built compact sport-utility vehicle focused more on sport than on the utility side of things. Standard equipment on the Base S models offered little more than cloth seats. Alloy wheels, tilt steering wheel and power steering were featured on XS models. Air-conditioning and AM/FM/cassette audio system were optional features.A 2.3-liter inline-4 was capable of reaching 96 hp and 103 ft-lb of torque in the Amigo. For drivers interested in a bit more driving enhancement, an optional 120-hp 2.6-liter inline-4 was available. Both rear-wheel and four-wheel drive was offered, and these engines were originally connected to a five-speed manual transmission. Choices included either two or four seats, either of two trim levels, S or XS, and an open or enclosed cargo area. All Amigos featured two side doors and a side-opening tailgate which held a full-size spare tire.
For the 1991 model year, the XS received a locking center console as standard, while this feature was optional on S models. The following year a four-speed automatic transmission was added to the options list. A new grille was featured on the Isuzu Amigo in 1993. Automatic transmission was deleted in 1994 from the options list, and the base 2.3 liter, four-cylinder engine was scrapped. A rear stop light was also added in '94. Power steering, power outside mirrors, 16-inch wheels and a center floor console were added to the standard features list.
A very limited number of XS-F editions were introduced in 1994. 'F' standing for Frontera, this model featured power windows and locks and 4-wheel ABS. Though the reasons are unknown, the XS-F version had only 49-state emissions. Less than 75 units were ever sold, and the only badging shows this model is a sport blue XS symbol with a sport-front 'F' beside it.
After making its U.S. debut in 1991 and being dropped in 94, the Amigo made its comeback in 1998 with a wholly redefined model. Originally offered only as a two convertible, the second generation Isuzu Amigo was introduced in 1998. In 1999 a hardtop configuration joined the lineup. Very similar to the Isuzu's larger Rodeo mechanically, the second generation model had body-on-frame construction and a non-independent rear suspension. Both models were built in the assembly plant in Lafayette, Indiana. The Rodeo featured four doors, while the Amigo featured a rear mounted spare tire, 16-inch tires and larger fender flares.
The only trim available was S, with standard features that included an AM/FM/ cassette audio system, dual sunroofs on hardtops models and antilock brakes. A 130-horsepower, 2.2-liter four-cylinder or 205-hp 3.2-liter V6 were the power options for the Amigo. Originally both engines were connected to a five-speed manual transmission. A four-speed automatic transmission became available and was featured as standard equipment on Amigos equipped with the V6 engine in 1999. The Amigo featured both two-wheel drive and four-wheel drive-versions.
The interior of the Amigo was shared with the Honda Passport. The inline-4 models featured air-conditioning, CD player, trailer hitch, side steps and alloy wheels on the options list. V6 engine equipped Amigos featured a much more extensive option list that included keyless entry and full power accessories. 4 people can ride comfortably in this newest Amigo, though it seats five.
Weighing 4,250 lbs, the small SUV needed a lot of horsepower for just everyday driving. The answer to this was the 3.2 liter, 205 hp V6 that carried 214 foot pounds of torque at 3,000 rpm. On the road, gas mileage is an estimated 22 MPG highway.The Amigo is built with a rigid frame that has 8 crossmembers, while front suspension has independent lower and upper arms with a solid rear axle. Many have commented that riding the Amigo is similar to riding in a full size truck, feeling many bumps in the road. A good SUV for slippery surfaces, the Amigo came standard with Isuzu's 10 bolt rear axle and its push button 4-wheel drive button. A traditional floor mounted lever was found in the Amigo which was for switching from 4wd high to 4wd low. For 2000 the Isuzu Amigo received a redesigned front styling along with a new Ironman package that included adaptable shock absorbers. This new package was for serious off road capability and came standard with a DANA 44 rear end, Inelligent Suspension control, limited-slip differential and larger tires than the LS model. The rarest of Amigo's, only 288 units were produced in 2000, and 187 in 2001. The following the year the vehicle was rebadged by Isuzu as the Rodeo Sport to compliment its longer Brother, the Rodeo. The Amigo series continued to be produced until 2003 and the Rodeo was dropped from Isuzu in 2004.Many consumers were turned off by the interior of the Amigo, with its cramped space, and ill fitted with low-quality plastics and the poor sunroof design on hardtop models. But the outside was considered quite handsome, along with its powerful V6 and respectable off-road ability. The short wheelbase made it easy to maneuver through urban-type environments. Unfortunately the soft suspension settings and slow steering reduced handling ability.By Jessica Donaldson

Amigo
Ascender
Axiom
VehiCROSS
© 1998-2020. All rights reserved. The material may not be published, broadcast, rewritten, or redistributed.