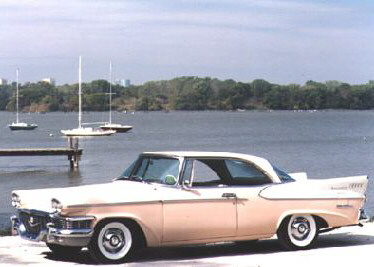 The President Starlight hardtop was produced for only one year, 1958. The Starlight was complete with chrome and fins, but it was still based on the old 1953 body shell. The narrowness of the body prevented the use of conventional quad headlights, so Studebaker restored to a 'pod' design where the lights bulged out slightly on the sides of the car.
By Daniel Vaughan | Dec 2006

The Starlight Hardtop was Studebaker's top-of-the-line model in 1958. Studebaker called it 'a star of the first magnitude in the constellation of Studebaker-Packard automobiles.' Created on a shoestring budget, the 1958 Starlight seemed very up-to-da....[continue reading]