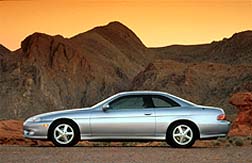 Eager to bask in the success of the Lexus debut a year prior, Toyota began to begin work on a mid-size Lexus coupe that would compete with rivaling luxury coupes of other marques such as Acura and Mercedes-Benz. A premium 2-door coupe from Toyota's luxury division, Lexus, the Lexus SC was introduced on June 1, 1991 as a 1992 model. With seating for up to four passengers, the SC had a front engine and rear-wheel drive design. No authentic luxury coupes were in existence at the time for Toyota. Choosing to use the Japanese second generation Toyota Soarer as the model upon which to base the new model, the main problem lay in ridding the new luxury coupe of the outdated and ‘boxy' look. With the target aimed at the American market, the coupe project was turned over to the Calty Design Research center in California.Using duracluster molding shapes to create the body of the coupe, the design team took a revolutionary approach by working 3-dimensionally rather than the traditional 2-D sketch method. Basing the design of the coupe on ‘emotion and feeling' (as described by design chiefs Denis Campbell and Erwin Luihe), the new Lexus Coupe design was a far cry from the old practice of linear aesthetics.
With a revolutionary design, the new coupe lacked nearly any straight edges, and was instead built on curvature. The resulting factor was a drag coefficient of only 0.31, a great aerodynamic feat at the time. In comparison to other vehicles during its production, critics hailed the new Lexus coupe as a distinctive design that was monumental in the development of following automotive designs.
The SC 400 carried a 4.0-liter V8 1UZ-FE along with a 4-speed automatic transmission, while the SC 300, introduced in June of 1992, had an inline 6-cylinder engine. This engine was reputed at costing over $400,000,000 in both research and development. Both SC variations had the 2+2 notchback body, though the front-end styling was different. The SC 300 came with much fewer standard features and had a 3.0-liter engine inline 6 2JZ-GE that developed 224 horsepower and came with a 5-speed manual shift. Standard features were antilock all-disc brakes and a driver-side airbag. For the SC 400, the original 1991-1992 engines were rated at 225 hp. The 400's 1UZ-FE engine design was modified to 260 hp from 250 hp in 1996. Both the SC 300 and 400 were upgraded with VVT-I in 1998, increasing the ratings to 290 hp for the SC 400, and 225hp for the SC 300. In 1992 the Lexus SC 400 was named Motor Trend Import Car of the year. For 1992 through 1998 the SC also made Car and Driver magazine's Ten Best list. First generation Lexus SC coupes were assembled at Toyota's Higashifuji Technical Center in Motomatchi, Japan.The original first generation SC, largely due to its advanced design, continued to thrive in production until July 7th of 2000. In comparison to other vehicles during the 1990's that are redesigned every 3-4 years, it was considered quite a feat for the coupe to survive virtually unchanged over nine years. Minor changes and updates were made, these included new tail lighting along with a modified spoiler design. In 1997 a new front grille was also added to increase the airflow into the engine.The 2001 the second generation model, the SC 430, a hardtop convertible design went into production. Introduced at the Paris Motor Show in 2000, the newest Coupe was met with instant acclaim. The SC 430 was powered by a 4.3 L 3UZ-FE V8 engine with VVTi joined with a five-speed automatic transmission. This was an identical engine to what was found in the UCF30 Lexus LS. The second generation coupe was capable of reaching 0-60 in 6 seconds, due to the SC 430's V8 producing 280 hp and 430 of torque.. While the first generation SC was mainly styled in California, the majority of the styling for the second generation was conceived in European design studios. Designers and engineers from both Europe and Japan working simultaneously to create the sleek, streamlined design found on the flashy new convertible. With a base U.S. price of $63,825, the SC 430 features a retractable aluminum hardtop, all-leather interior, and 18 in. alloy wheels.
The third-generation Toyota Soarer was produced in Japan and featured the same body design and various other similarities with the first generation SC. The Soarer showcased a separate lineup of different powertrains and vehicle configurations. The Lexus marque was introduced in Japan in 2005, and the fourth generation Soarer, which was amazingly similar to the SC 430, was superseded by the Japanese version of its Lexus counterpart.
Lexus released the ‘Pebble Beach Edition' in 2004, a limited-production model of the highly popular SC. Featuring a very unique exterior and interior color combination which changes from year to year, the special edition SC is produced in partnership with the Pebble Beach Company. Only 400 units of the special edition were produced in '04, '05, and '06.Today all production of the SC 430 takes place at the Kanji (Kanto Jidosha) assembly plant in Japan. The SC 430 is marketed and sold in Asia, Oceania, Europe and North America.By Jessica Donaldson