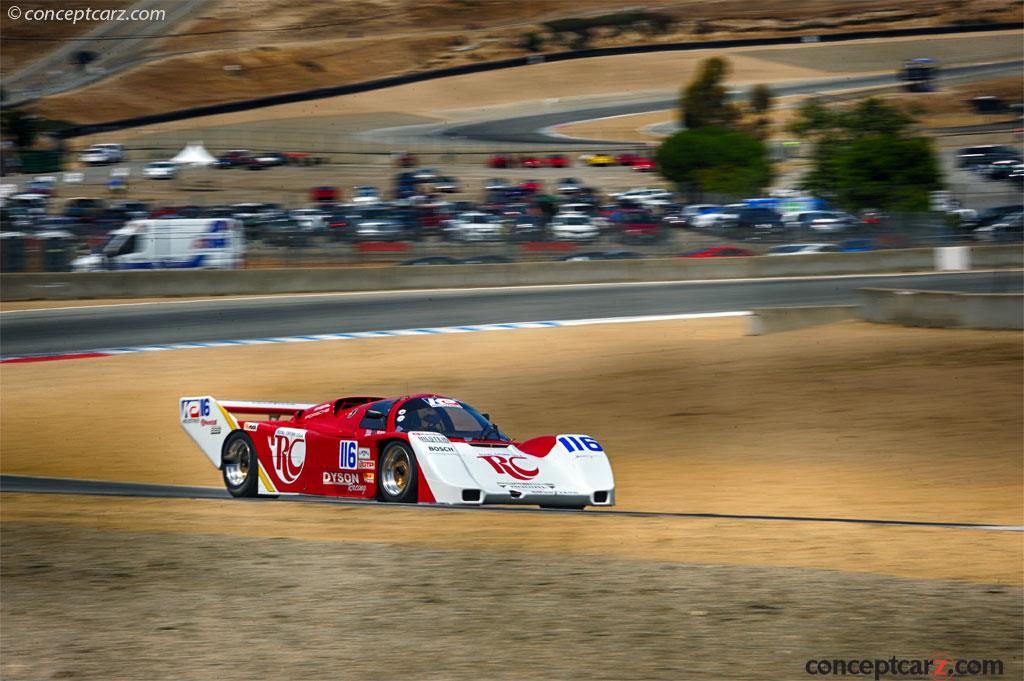 The Porsche 962 endurance prototype coupe, introduced in 1984, quickly became one of the most dominant and successful racing designs in history. Derived from the earlier Type 956 Coupe which had been introduced in 1982, developed for Europe's World Sportscar Championship Group C, it was developed as an entry for IMSA's GTP series and initially powered by a derivative of the highly successful 2.8-liter, air-cooled flat-six 935 engine with a single KKK turbocharger.

Instead of using a tubular spaceframe chassis design as they had in the past, the 956 was given an aluminum monocoque. It retained the Type 935 flat six-cylinder engine of the 936, to which twin KKK turbos and an all-synchro five-speed gearbox were fitted. The inboard rear suspension allowed for the creation of two large venturi channels to maximize ground effects underneath the car. Reputedly, the 956 generated over three times as much downforce at speed as the 917.

The 956 had not satisfied the requirements and regulations of IMSA GTP, mainly the location of the pedal box, which was positioned ahead of the front axle, and the racing engine. The 962 was essentially a long-wheelbase version of the 956 with the pedal box behind the front axle. The wheelbase changed but the overall length remained the same due to shortening the nose. The suspension was nearly identical with double wishbones at the front with the rear using lower wishbones in-board, and rocker actuated springs and dampers.

IMSA GTP regulations stated that the engine was to be a production-based unit. So Porsche engineers based the 962 engine on the Porsche 911 Turbo. It was given a displacement of just over 2.8 liters and using the 1.4x turbo equivalency formula, the 962 was grouped into the Under 4-liter category. The single camshaft engine was produced approximately 680 horsepower and was backed by a five-speed gearbox.

A single works 962 preceded the customer's cars and was built for testing and development. Mario and Michael Andretti entered it in the 1984 Daytona 24 Hours where they qualified on pole position with a time that was nearly two seconds faster than the second-place car. This would be the only race for the Porsche 962 prototype and the only Works team entry in GTP. Porsche left the IMSA GTP championship to be contested by privateers while they focused its efforts on the World Championship. Perhaps to be expected from an untested car, the 962 retired on lap 127 from Daytona due to engine and transmission problems.

The production examples were ready beginning in April of 1984. During its inaugural year, the 962 would score seven victories. American Preston Henn entered the IMSA GTP class at the 24 Hours of Le Mans in 1984 where it was driven by Henn, Michel Ferte, and Edgar Doren. Their day ended on lap 247 after ignition failure and received an overall classification of 26th position.

To create more competition, IMSA eased its restrictions by 1985, allowing the Porsche to run larger 3.2-liter engines that offered 720 horsepower. Preston Henn entered a 962 at the seasons opening Daytona 24 Hours and scored an overall victory. The car won again a month later at the Sebring 12 Hours. The Porsche would win nearly every race (all races except one) in the GTP class during the 1985 season. This dominance would continue until the start of the 1988 season when Nissan introduced its new Works entry.

Porsche introduced the 962C in 1985 for the World Sprotscar Championship. Ironically, it would lose to its 956 sibling, which had already earned WEC top-honors on four occasions. In 1987, a 962C powered by a new 3.0-liter engine claimed overall victory at the 24 Hours of LeMans, scoring Porsche's seventh consecutive victory at the race.

IMSA attempted to level the playing field in the late 1980s, which allowed the 962s to run twin turbochargers and water-cooled cylinder heads, although their air intakes were limited to 36 millimeters.

Porsche's racing department built a total of ninety-one examples of the 962 between 1984 and 1991, with seventy-five of them being built as customer cars and 16 being used by the factory team. Like the 956 program, the 962s built for the works team began with chassis 001 and received many technically advanced features. The customer cars began with chassis 962-101 and its mechanical setup was more standardized. The factory 962s typically wore the Rothmans colors, though for the 1988 24 Hours of Le Mans the works team cars donned a new Shell-Dunlop livery. Even after Porsche withdrew its factory entry in 1988, they continued to build additional 962C chassis for privateers.

The Porsche 956 and its close sibling, the 962 enjoyed an international career that spanned some thirteen years, including no less than seven Le Mans wins and five World Sportscar Championship titles. They are arguably the greatest long-distance sports racing cars of all time.
by Daniel Vaughan | May 2020The Porsche 962 was designed for the International Motor Sports Association GTP racing and as a replacement for the Porsche 956. The 956 had been a highly successful race car and had captured many triumphs including the 24 Hours Le Mans and the FIA series.

For over ten years, the Porsche 962 dominated the racing circuit to include the 24 Hours of LeMans, Daytona, FIA and IMSA racing. The Porsche 962 was so popular and so competitive that even their 1,000,000 price tag could not keep up with demand. Nearly 150 were sold and because of such a large customer program, every component was available off the shelf direct from Porsche.
by Daniel Vaughan | Aug 2005

The Porsche 962 GT Prototype Race Car replaced the aging 935 and was actually a derivation of the 956 that had successfully campaigned in Europe during 1982 and 1983. The 956 would have also been offered to privateers in North America were it not for....[continue reading]

Porsche introduced the 962 endurance prototype coupe in 1984. It is one of the most dominant and successful racing designs in history. The 962 was derived from the earlier-type 956 Coupe that was designed for Europe's World Sportscar Championship Gro....[continue reading]

This 1986 Porsche 962 #121 was purchased by Bruce Leven for his IMSA Bayside Motor Sports Team in June of 1986. Following six races in the remainder of the 1986 IMSA season, the #121, as the Bayside Budweiser Car, won six of only eleven races entered....[continue reading]

This Porsche, chassis number 113, was the Bob Akin Racing Coca-Cola/Dominos Pizza sponsored 962. It is possibly the most famous and photographed 962 in IMSA history and currently wears a restoration.....[continue reading]

The Porsche 956 Group C chassis was banned from racing in the United States until Porsche agreed to make changes, the most important being relocating the footbox to behind the front wheel axis for crash protection. The FIA adopted IMSA rules and a ne....[continue reading]

This chassis won on its debut at the 1986 Six Hours of Riverside, commencing a streak of four podium finishes to start the season. Additional wins were earned at Charlotte and Sears Point. Price Cobb finished second in the 1986 IMSA GTP Championship ....[continue reading]

The 22nd customer 962 chassis was constructed by Porsche and delivered to Dyson Racing for the 1986 IMSA racing season to be campaigned in the RC Cola livery. The first race outing was Watkins Glen in June of 1986 which ended in disaster as it crashe....[continue reading] 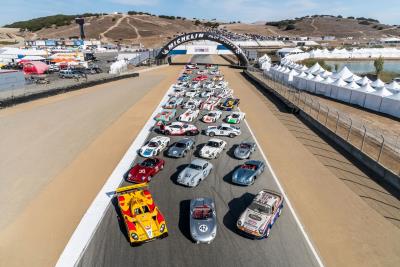 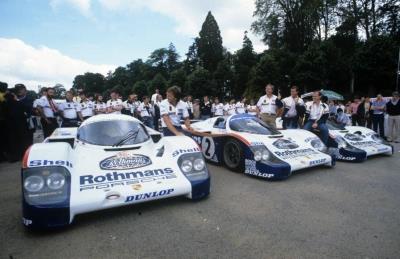 The 24th annual Amelia Island Concours dElegance will honor and celebrate the 35th anniversary of one of the greatest and most accomplished sports racing cars of all time. Porsches landmark 962 reigned...