In August of 1938 the 158 began its racing career victorious, finishing first and second at Livorno. It was driven by Villoresi and Biondetti. This would signal the beginning of a sucessful racing career that would last for 13 years. During World War II, racing was post-poned and the 158's were put into storage. 6 years later, they were brought out of retirement and brought back to the track. The 15 represented the cubic centimeters of the engine while the 8 was for the number of cylinders. So the 158 was equipped with a supercharged 1500cc, 8 cylinder engine capable of producing 200 horsepower at 7000 rpm. The engine was a design by the famous Gioacchino Colombo. Gioacchino Colombo started out being the primary builder of Ferrari's engines in the late 1940's and a major contributor to the success of Ferrari. Aurelio Lambredi became his assistant in 1947. Lambredi soon became convinced that a large engine that was naturally aspirated would have better fuel economy and provide more power. Colombo was of the belief that smaller engine compiled with a supercharger would produce the better results. Ferrari tested Lambredi's idea and proved it to be successful. Lambredi was promoted to chief design engineer and Colombo returned to Alfa Romeo. The Lambredi engines were used by Ferrari in the ladder part of the 1950's.
One of the successes of the 158 came from the engine being very light, weighing only 362 pounds. The engine block was cast in Elektron, a type of magnesium, and consisted of two separate casting integrated with a common head, with dual overhead camshafts. The crankshaft was chrome nickel steel.
The super charger was a single-stage, Roots-type, that provided 17.6 psi of boost. In 1946, the 158's were modified to meet Formula Libre regulations. The 158 now produced 254 horsepower.In 1947, the 158/47 came about due to new regulations for the Formula 1 class. As a result, the horsepower rating was increased to over 300. In 1950, the engines once again received attention and now capable of producing 350 bhp at 8600 rpm.The 159 replace the 158 at the closing of 1950.
At the time, the World Championship was composed of seven races. Yet, there were many other races that were run during that year but that didn't count. The seven race calendar, at this time, included the Indianapolis 500 and, interestingly enough, was the only race on the schedule not won by the dominant Alfa Romeo 158 Alfetta and the Alfa Romeo SpA team. Johnnie Parsons was able to take the checkered flag at Indy to break up what was sheer dominance by two drivers of the same team—Giuseppe 'Nino' Farina and Juan Manuel Fangio. Nino Farina, the nephew of Pinin Farina the famous coach maker, took the first race of the season at the British Grand Prix held at Silverstone. Fangio took the win at the next event held at Monaco. Indy was the next race, won by Parsons. Farina then took the next race, the Swiss Grand Prix held at Bremgarten. Fangio scored two in a row by winning the Belgian Grand Prix at Spa-Francorchamps and the French Grand Prix held at Reims-Gueux. Nino Farina went on to take the final race of Formula One's first season at Monza and the Italian Grand Prix. Farina ended up winning the first championship due to the fact he was able to finish races in the points when Fangio ended up winning, while Fangio did not finish the races that Farina ended up winning. Therefore, the only points Fangio ended up scoring the whole season were the ones he earned from his wins, whereas Farina had the same number of wins but was also able to score other points by finishing races in the points. Despite Indianapolis, the Alfa Romeo 158 dominated Formula One's first season. But what was it about this car that led to such domination? By the start of the 1950 season the Alfa 158 was by no means a new car, but perhaps that is what made it so dominant. Designed by Gioacchino Colombo, the 158 first raced back in the 30s and then sat in garages or on shelves for the next 5 or 6 years waiting for World War II to come to an end. This may have been a blessing since there were practically no new parts to try and marry together. It was already a proven design instead of being brand new and needing the kinks worked out. In fact, the only rather big update to the car coming into the 1950 season was the addition of a Roots-type supercharger. The addition of the Roots-type supercharger was significant to the 158's performance since it boosted the 1.5 liter inline 8 cylinder engine's power to around 350 horsepower!
The 158 was also known as 'Alfetta', meaning 'Little Alfa', and this name was fitting since the car was rather light for its day no doubt due to the fact the engine itself weighed less than 400lbs. Given the fact the Alfa used an inline 8 cylinder engine, along with the Roots supercharger, meant the engine was not all that compact. The small, narrow tubular frame of the Alfa Romeo chassis, its gentle curves, and powerful engine all went to produce a package that wrapped tightly around the single-seat. Despite being narrow in wheel base compared to its length, the rather compact design produced a relatively stable race car.

The narrow tires and the trailing arm suspension lent to a sliding driving style due to the understeer caused by the small contact patch of rubber to the ground and the fact the suspension type caused the wheels to roll to the outside edge in the opposite direction of the turn, the same as the chassis. The rear suspension utilized a swing axle, which meant each wheel had an independent suspension. At the time, this was an improvement upon a solid axle. However, when the axle rebounded it would cause the wheels to ride on the outside edge due to the car bouncing. To overcome these issues of the wheels loosing some of its contact with the pavement, the 158 used transverse leaf springs with hydraulic dampeners.
The cockpit, despite being wide open, was rather tight for the driver behind the large wooden steering wheel and the 4-speed gearshift. Yet, despite this the driver could feel part of the car. And what the driver was part of was a proven race winner with added power. In the hands of a skilled driver, and barring any mechanical failure, the 158 was a force not easily beaten. In fact, despite its age, the combination of its compact size and the increased horsepower made for a dominant package and a dream shot for the driver to become champion of the newly formed Formula One.By Jeremy McMullen
Formula One VehiclesConcepts by Alfa Romeo 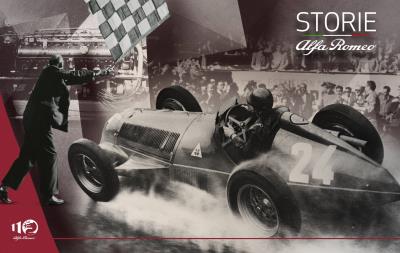 The bond between Alfa Romeo and Formula 1 is inscribed in the history of GP racing Alfa Romeo won the first Grand Prix Championship in the inaugural edition of the ultimate category of motor racing in 1950, with Nino Farina on board an Alfa Romeo... 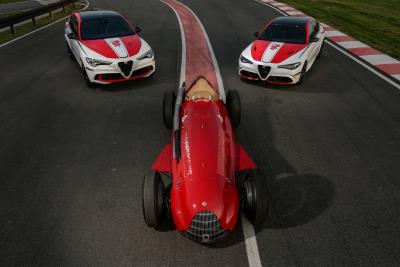 Alfa Romeo were the winners of the first Grand Prix and of the first championship in the history of Formula 1, the most important motorsport competition that counts millions of enthusiastic fans worldwide Race number one thousand will be held on Su...
© 1998-2022. All rights reserved. The material may not be published, broadcast, rewritten, or redistributed.