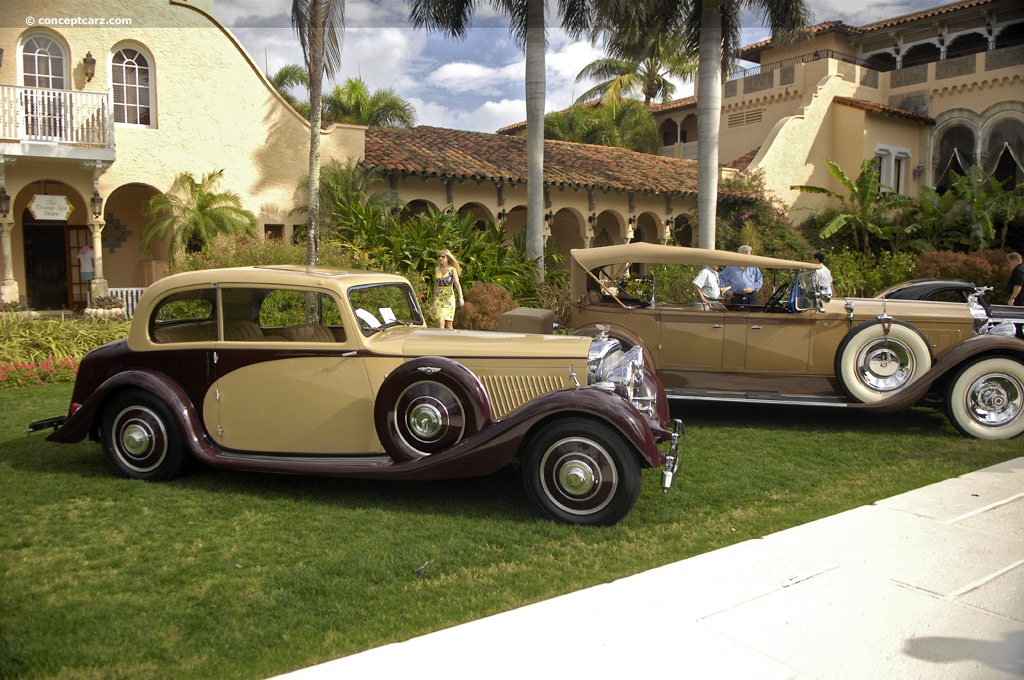 Bentley Motors was acquired by Rolls-Royce in 1931 with the declared intention to make the best sporting car of its type in the world. This was not an easy challenge, because they did not wanting to alienate either customer base. With production of the Bentley 8 and 4½ litre shut down, the question remained as to what sort of car to build. The Experimental Department developed several prototypes before settling on a car that was based on the earlier 18hp experimental chassis called the 'Peregrine' fitted with a modified 20/25hp engine. Introduced in 1933, these 'Derby Bentley' 3½ liter models offered luxury, power, and superior engineering. They were a combination of traditional Rolls-Royce refinement with Bentley handling and performance. Based on the contemporary Rolls-Royce 20/25, the 3½-Litre Bentley employed a tuned twin-SU carburetor version of the former's 3,669cc overhead-valve six-cylinder engine developing 115 horsepower. Its wheelbase was shorter than the 20/25, measuring 126-inches. They had servo-assisted brakes and a part-synchromesh four-speed gearbox, adding to the high performance capability in nearly absolute silence.

The 'Silent Sports Car,' as they were called, was followed by the more powerful 4¼ liter, which raised the bar further, with its performance, superb brakes and effortless long-distance touring capabilities. The 4¼ liter had been introduced in 1936 when the bore size in the 3½-Litre had been increased to 4,257cc, and the adoption of superior Hall's Metal bearings. This new engine was used in both the Bentley and the Rolls-Royce 25/30hp, with the Bentley enjoying the superior specification, boasting twin SU carburetors, raised compression ratio, and a more 'sporting' camshaft. It had more power than the preceding model while retaining the well-proven chassis with its faultless gear-change and servo-assisted braking. With a top speed approaching 90 mph, they were at the top of the contemporary supercar category.

These were exclusively coachbuilt automobiles and due to the sporting nature, were almost always fitted with owner-driver saloon or drophead coupe coachwork, the 'standard' designs being the work of Park Ward.

In 1931, Bentley production moved to the Rolls-Royce factory at Derby, England, following the acquisition of Bentley by Rolls-Royce. The cars which followed were known as 'Derby Bentleys' as opposed to the earlier cars which came from the original B....[continue reading]

In 1931, Rolls-Royce purchased Bentley out of receivership. Their client base dwindled because the cars were so well designed and constructed they rarely needed replacement.....[continue reading]

Built only five years after designer W.O. Bentley sold his company to Rolls-Royce in 1931, the Bentley 4.25-Liter reflected elements of W.O's influence, but was a Rolls-Royce at heart. Distinguished by its startling quiet six-cylinder overhead-valve....[continue reading]

Bentley rather discretely announced the arrival of its new 4.25-liter model. The subtle announcement was merely an attempt to appease customers who had already ordered the 3.5 Litre model and whose chassis were at the contracted coachbuilders. Other ....[continue reading]

The Derby Bentley, introduced towards the beginning of the 1930s, had undergone a number of significant developments by the time of the firm's take-over by Rolls-Royce near the close of the the decade. In 1936, the bore size was increased, raising th....[continue reading]

Bentley had a reputation for their racing success. Bentley was at the top of the British sports car market in the 1930s, with few competitors other than Bugatti and Hispano-Suiza. In 1931, Rolls-Royce acquired Bentley and has been owned by Volkswagen....[continue reading]

The Derby Bentley was introduced towards the beginning of the 1930s and by the end of that decade had received a number of significant developments. In 1936 it had received an increase in bore size upping the capacity to 4257cc. This new engine was s....[continue reading]

Gurney Nuttings chief designer, A.F. McNeil, penned the Airflow Saloon for the Bentley 4¼-Litre chassis. McNeil was also the creator of such famous bodies as the Maharaja of Indore's Duesenberg Model SJ. He was a pioneer of British streamlining, with....[continue reading]

Rolls-Royce Motors acquired Bentley in 1931 with the understanding that the company would continue to produce a Bentley. The first Derby-built Bentley appeared in 1933. The chassis and engine used in the Rolls-Royce 20/25 was given a new cross-flow h....[continue reading]

In 1931 Rolls-Royce purchased Bentley Motors and moved the Bentley factory north from Cricklewood in London to Derby. The first 3.5 Litre 'Derby' Bentley - or 'The Silent Sports Car,' as it was called in contemporary sales literature - was introduced....[continue reading] 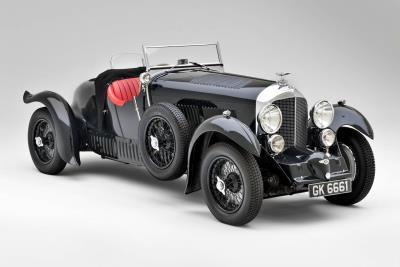 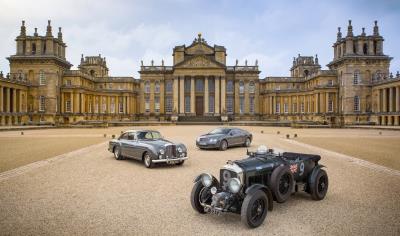 Windsor, 28th February 2019. Salon Privé (5th to 8th September) will this year dedicate two days (Saturday 7th and Sunday 8th September) to celebrating the centenary of one of Britains most revered...

Total 1936 Bentley 4¼ Liter production: 0
© 1998-2020. All rights reserved. The material may not be published, broadcast, rewritten, or redistributed.