Model-year 2003 New Beetles are distinguished by turn signals integrated into the exterior mirrors. But this is more than a design measure: The large side turn signals are much easier to see and thus optimise passive safety. New Beetles of 2003 also draw attention to themselves with new exterior colours. Campanella white, sunflower, royal navy metallic, Alaska green metallic and speed blue metallic are contemporary, fresh colours, many of which are also offered on the New Beetle Cabriolet debuting this spring.

Another new feature is the optional 16-inch light-alloy Route 66 rims, which come with 205/55 R 16 tyres. Also available as optional extras are Xenon headlights including automatic beam-width control and headlight cleaning system. In addition, all New Beetle versions will boast the black/silver VW emblems.

The interior of the 2003 models offer new fabrics ('Mini' design in black, flannel grey, cream, red uni, sunflower and ravenna blue), new cupholders, and a convenient centre armrest, which is being used for the first time in the New Beetle. The centre console is loaded: On the one hand, it can be used as an adjustable armrest, but under the padding is an additional storage compartment that can hold the optional 6-CD changer. 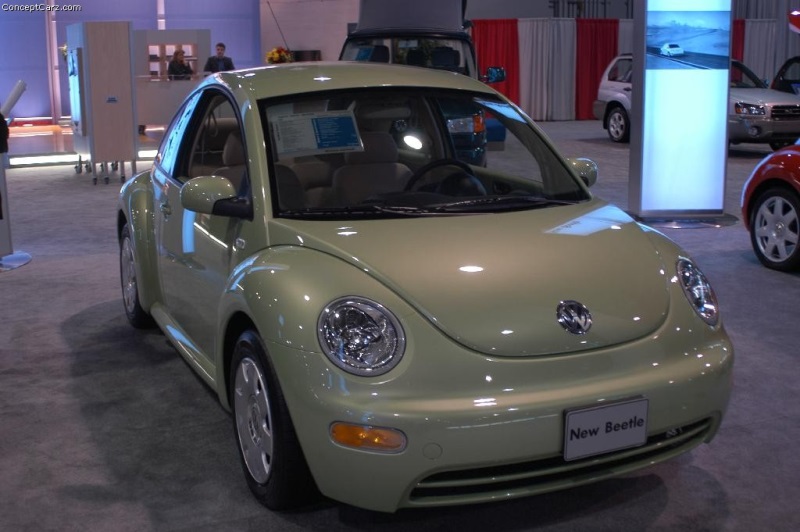 When Volkswagen presented the Beetle Cabriolet in 1949, open-topped driving in a four-seater became accessible to many people for the first time. On a matured and practical basis, the vehicle offered pure driving fun under open skies throughout the world. The Beetle Cabriolet was phased-out in 1980 after more than 330,000 vehicles had been sold; by this time, it had long since become the status-neutral lifestyle vehicle for generations of Cabriolet drivers. The New Beetle Cabriolet is a highly modern interpretation of precisely this vehicle concept. A lifestyle vehicle, equally status-neutral, equally open without convertible top bows and equally practical.

With its full-size rear seats plus optional through-loading aperture, a roll-over protection system which automatically extends in the event of an emergency, its all-season convertible top including heated glass rear window and a six-speed automatic gearbox (optional equipment), available for the first time in the world in this class, the torsionally-rigid New Beetle Cabriolet concept shows just how extremely safe, comfortable and practical a lifestyle-oriented vehicle can be. 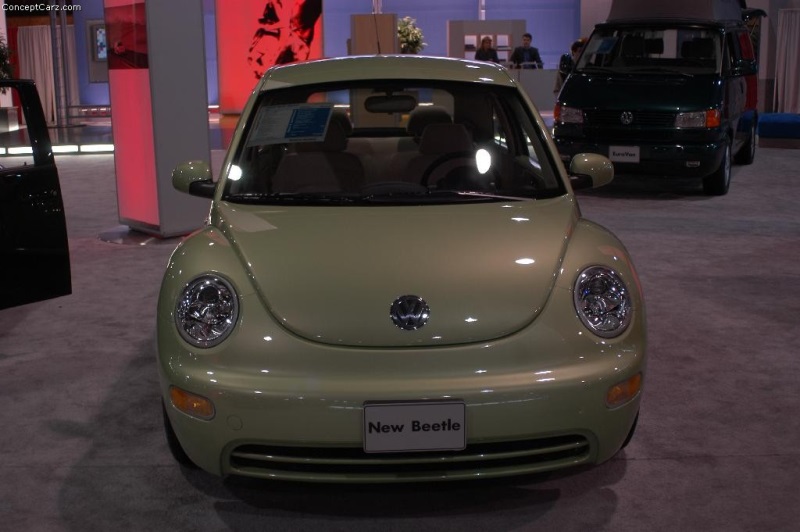 Special exterior paints developed specifically for the New Beetle Cabriolet add a dash of colour to everyday life: aquarius blue, mellow yellow and harvest moon, to name just a few; their very names make it clear that emphasis is placed on this vehicle's positive and pleasant radiance.

The New Beetle Cabriolet will be introduced to the European market with three engine versions. The entry model offers a four-cylinder petrol engine with 55 kW / 75 hp. The next stage is a 1.6-litre petrol engine generating 75 kW / 102 hp. And the most powerful petrol engine is a 2.0-litre four-cylinder with 85 kW / 115 hp. Just after the debut of the Cabriolet comes the economical, high-torque four-cylinder turbo diesel: This 1.9-litre engine with pump-jet direct injection generates 74 kW / 100 hp. All engines fulfil the strict EÚ 4 exhaust emission standards. ( posted on conceptcarz.com)

A manual five-speed gearbox is offered with all engines. In addition, Volkswagen is offering a new six-speed automatic gearbox with Tiptronic function — one of a kind in its segment — as an option for the 2.0-litre petrol engine.

Cabriolet-specific technical highlights include the design and actuation of the fabric-covered convertible top. As before in the case of the Beetle Cabriolet, the so-called soft top comes to rest in the area of the imaginary C-pillar when opened. This calls the historic Cabriolet to mind. However, the height of the folded convertible top has been considerably reduced thanks to especially lavish Z-folding.

In order to open it, the convertible top is released by means of a one-hand control in the front area of the roof. It can then be folded into its resting position. If the optional electro-hydraulic system is installed, the convertible top can be opened and closed in a mere 13 seconds at the push of a button. A continuous trim strip forms the especially refined transition between the lower edge of the convertible top or windows and the body line.

The automatic roll-over protection system has been harmoniously integrated into the open Cabriolet's silhouette. The system is located behind the rear seat backrest. A roll-over and crash sensor determines the possible risk of the vehicle's rolling over, and actuates the protection system. In this case, two supporting profiles shoot up within 0.25 seconds and secure the passenger compartment together with a reinforced windscreen frame. 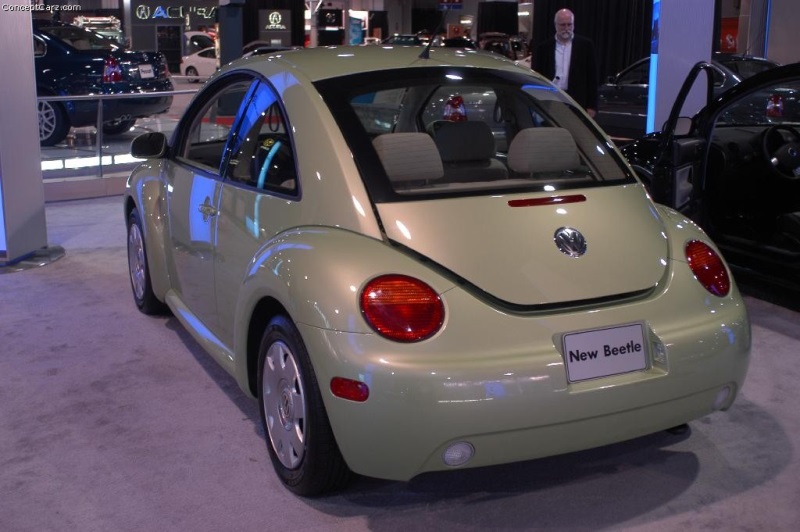 The passive safety elements, which include effective front and side airbags and energy-absorbing side panelling specially-designed for the Cabriolet, are supplemented by proven active safety mechanisms. The New Beetle Cabriolet thus comes standard with side airbags, ABS and ESP.

(All data and specifications in this press information apply to the range of models available in North America or Germany. They may differ in other countries. Changes and discrepancies reserved.)Source - Volkswagen 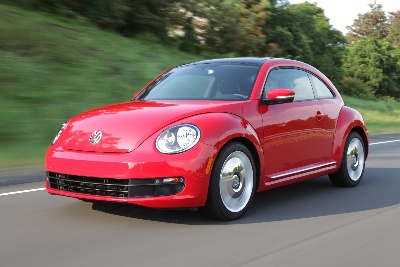