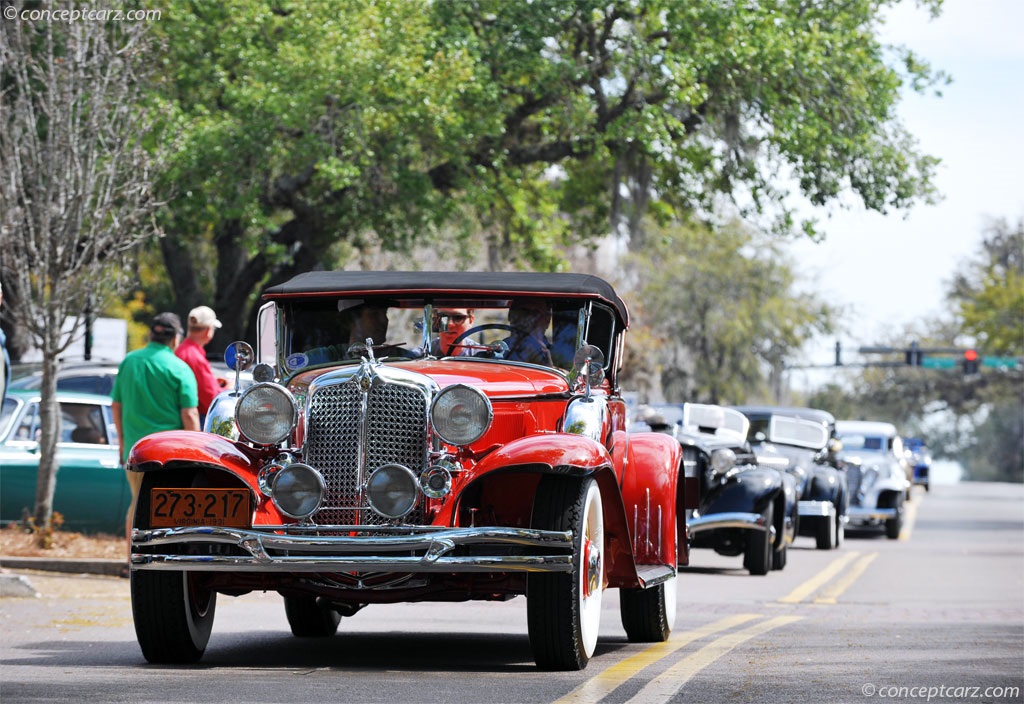 The Chrysler Corporation was founded by Walter Chrysler in 1925 from the remains of the Maxwell Motor Company. Walter had been hired by the Maxwell-Chalmers company in the early 1920s, to help rescue the ailing company like he had done for the Willys-Overland car company. The new lower-priced four-cylinder Chryslers were introduced for the 1926 year being badge-engineered Maxwells. These medium-priced six were soon joined by a lower-priced four. The production E-80 Imperials were priced between $2,645 to $3,695, which made them competitors with the Packard Six and the lower-priced Cadillacs. Chrysler fashioned the Imperial with unique and distinct features that included bullet headlights and a scalloped radiator. Six production body styles were available, along with two long-wheelbase catalog customs, a landaulet and a town car. Sales were respectable for the Series 80 in 1926, with 9,114 examples sold.

Additional body styles were made available on the Imperial line for 1927, and in 1928, custom styles from LeBaron, Dietrich and Locke were cataloged on four different wheelbase. The engine bore received an additional eighth of an inch, resulting in displacement of 309.3 cubic inches. Horsepower was rated at 100 hp or 112 when fitted with the optional high-compression head.

The Chrysler cars of 1929 received a 'corporate look' that coincided with the introduction of the new DeSoto and Plymouth marques. In the front, the grille shells were given a thin band of chrome around the perimeter. The Imperials now rested on a longer, 136-inch wheelbase platform. For 1930, the Imperials received a new four-speed transmission, automatic radiator shutters, and vertical hood louvers.

In July of 1930, Chrysler introduced a vastly different automobile called the Series CG Imperial. It was larger than its predecessor, riding on a 145-inch wheelbase, and with a completely new appearance. The radiator shell was now a grille that was tilted at a rakish angle. In front of it was a wire mesh screen. Behind the grille was a long hood and fenders with flowing curves. The interior had adjustable front seats and steering columns, and sun visors. Mechanical features included hydraulic shocks, rubber spring shackles, hydraulic brakes, and a four-speed transmission. The engine was a 384.8 cubic-inch, nine-main bearing engine with Stromberg carburetor and 125 horsepower. Four 'production' bodies by Briggs, four cataloged custom styles, and various individual customs for construction were available on the Imperial chassis. The semi-custom bodies, roadster, coupe, convertible coupe and dual-cowl phaeton, were all furnished by LeBaron. Derham, Locke, Murphy, and Waterhouse produced individual custom bodies on the Imperial chassis.

The name Imperial had been used by Chrysler since 1924 representing their top models. These models were more expensive, larger, faster and more elaborate than the base model Chryslers. Two years later the Imperial became its own series. The 1926 version, dubbed the E-80, was powered by a 288.7 cubic-inch six cylinder engine capable of producing an astonishing 92 horsepower. Its impressive looks matched....
Continue Reading >>

By 1931, the Great Depression was settling in for a long stay, but Chrysler introduced its first eight-cylinder models, including a top-of-the-line Imperial series on a lordly 145-inch wheelbase. Because it imitated the renowned Cord L-29 of 1929, th....[continue reading]

The 1931 Chrysler Imperial was designated the CG series, and is widely considered to be the most beautiful Imperial ever built. The new design was based on the Alan Leamy-designed 1929 Cord L-29. It features a 384 cubic-inch flathead eight engine, pr....[continue reading]

Walter P. Chrysler, after a successful career in railroading followed by stints at Buick and Willy-Overland, took over the Maxwell Company in 1921. He introduced an all-new car bearing his name in 1924. This first Chrysler six was extremely well-engi....[continue reading]

This 1931 Chrysler CG Imperial Roadster was offered for sale at the 2007 Sports and Classic Car Auction presented by The Worldwide Group, in Hilton Head Island, SC where it was estimated to sell for $190,000 - $200,000. It is powered by a 'Red-Head'....[continue reading]

There were 3,228 Imperials built in 1931 with 1,195 examples fitted with close-coupled club sedan bodywork by Briggs Manufacturing Company. Many of these club sedans were later re-bodied to make dual cowl phaetons. As a result, this original exampl....[continue reading]

There were fewer than 90 Chryslers in 1931 with LeBaron coachwork. Many believe that the dual cowl phaetons are the most attractive and important of the Chrysler Corporation during this period. With the rarity of the LeBaron coachwork in mind, and ....[continue reading]

The very elegant Chrysler CG Imperial models were introduced in July of 1930 and rode on a massive 145-inch wheelbase. It was a new car that had been completely transformed from the prior models. The radiator shell had become a grille which was pos....[continue reading]

The Chrysler Convertible Coupe with LeBaron coachwork was the height of Thirties luxury and style. The 1931 Chrysler Imperial CG model was the first Imperial with custom body by LeBaron, but that wasn't the only thing that made these Imperials speci....[continue reading]

This 1931 Chrysler CG Imperial Dual Cowl Phaeton is one of only 85 examples produced during 1931. It is a four-door rare original example with one of the most elegant designs of the era. This car was inspected at the Jefferson plant in Detroit on M....[continue reading]

This LeBaron bodied Roadster was originally delivered to Belgium. it would remain in continental Europe for nearly seven decades before returning to the United States in 2000 when collector David Kane purchased it from its second owner. This car was ....[continue reading]

This 1931 Chrysler Imperial CG Dual Cowl Phaeton with coachwork by LeBaron was delivered new to two doctors (a man and wife) in Reading, Pennsylvania in May of 1931. They maintained the car until the late 1950s. The current owner acquired the car in ....[continue reading]

This roadster is the 64th of the 100 roadster built between 1932 and 19323. It wears the factory LeBaron-designed coachwork and rides on the long wheelbase of the CG chassis. The car was built on March 24th of 1931 at the Jefferson Avenue factory in ....[continue reading]

Walter P. Chrysler followed a successful career in railroading with a move to Buick and then Willy-Overland. In 1921 he took over the Maxwell Company and in 1924 introduced an all-new car bearing his name. The first Chrysler six was well-engineered a....[continue reading]

It is believed that about 12 examples of the LeBaron bodied Roadster remain in existence. This example is an early example that was delivered in February 1931 finished in Pembroke Gray and likely had a red leather interior. It has a 3.82:1 rear end g....[continue reading]

Introduced in July 1930, the CG Imperial was only produced through December 1931. The prior owner of this Close-Coupled CG Imperial Sedan acquired it in 1989 and commissioned a body-off restoration in 1995. At the time, the fenders were missing and n....[continue reading]

This Chrysler CG Imperial Dual Cowl Phaeton by LeBaron was purchased sometime in the mid- to late-1930s, at auction, from the city of New York, having been seized for unpaid taxes or its possible association with organized crime. Though not confirmed....[continue reading]

This car is a former Chicago Show car and one of two pre-production cars by LeBaron. ....[continue reading]

The Great Depression was at its depths, but American car makers persisted with opulent luxury vehicles, and Chrysler was no exception. Designed to compete with offerings from Auburn, Cadillac, Cord, Duesenberg, Lincoln, Marmon, and Packard, the Imper....[continue reading]

This Chrysler is a well preserved Model CG Imperial Dual-Cowl Phaeton by LeBaron. Joe Morgan found the unrestored car in Rhinelander, Wisconsin, in the early 1980s and brought it to its present high-level presentation. The original build sheet from C....[continue reading]

Chrysler built the luxurious 1931 CG Imperial to compete with the Duesenbergs, Packards and Cadillacs of the period. Al Leamy designed the LeBaron-built Dual Cowl Phaeton following the style of his Cord L-29. The original CG Imperial featured gracefu....[continue reading]

This Chrysler was restored in the 1980s with a dual-cowl phaeton body in the style of a LeBaron original and wears a reproduction body tag of 147-32. The front fenders are original, but the rear fenders may have been reproduced or modified as needed ....[continue reading]

This Chrysler CG Imperial Convertible Coupe was owned by Joe Morgan who acquired it from David Buck, of Arizona. The car retains its original body, frame, and engine with which it was delivered in San Francisco. It has been given a restoration and fi....[continue reading]

This Chrysler is an early production CG Imperial and was reportedly one of 24 built in Ontario, Canada. After World War II, the car made its way from Canada to Queensland, Australia. Later, Max Houston purchased the chassis and subsequently had it re....[continue reading]

In 1931 Chrysler introduced a new LeBaron-bodied Imperial Roadster. Built on a 145 inch wheelbase, this Imperial Roadster is considered one of the best looking Chryslers ever built. Styling cues included long, flowing fenders and a low-swept hood fla....[continue reading]

This Chrysler dual-cowl phaeton by LeBaron is fitted with a flip-up rear cowl, with dual cockpits and rolled pleats of leather around the top edge of the body. In the front is a V-windshield complimented by a LeBaron factory designed trunk. This rest....[continue reading]

The 1931 Chrysler Imperial rested on a 145-inch wheelbase chassis and was powered by a 125 horsepower straight eight. The 'semi-custom' coachwork was available to customers for additional costs and were supplied by the LeBaron imprint of Briggs and s....[continue reading]