The recipient of the AutoPacific Best in Class Vehicle Satisfaction award, the Maxima is a full-size car manufactured by Nissan that was introduced in 1976. Marketed as the ‘four-door sports car', the Maxima was originally an upscale version of the Bluebird that spun into its own line 1981 and had been made continuously since then. Prior to 2004, most Maximas were built in Oppama, Japan, they are now being assembled in Smyrna, Tennessee. In various markets the Maxima models are also known as Nissan Cefiro or Nissan Laurel.One of the longest running mid-size sedans on the American automobile market, the Maxima is still considered to be one of the most affordable luxury models on the sales lot today. It wasn't until 1985 that the Maxima branched off into its own model and with a great number of changes and upgrades the Maxima has continued on in its own right. Beginning its run as a square two-door coupe, the Maxima has blossomed into a sinewy, sporty four-door sedan today that is not only eye catching, but economical.Known in the U.S. as a trim level of the Datsun 810 from 1976 until 1979, the Maxima was known as a variant of the Bluebird to European consumers. The badge 'Maxima' was only known to the European Market. Nissan introduced the 810 Maxima to the United States in 1982 which featured a 2.4L I6 and the option of either a five-speed automatic or five-speed manual transmission.
In 1981 the first car to wear the Maxima name was introduced and was basically a Japanese-maret Bluebird 910 with a 3.9 inch longer nose. This first year it was offered as the 810 Deluxe or 810 Maxima but the following all 810s became Maximas. The final year of the first generation Maxima in 1984, American Datsuns begn carrying the 'Nissan' badge also. Toyotas response to this was the introduction of an upmarket sibling, the Cressida.
The Maxima became a standalone badge in '85 equipped with a 157 hp 3.0L V6 engine. For both 1987 and 1988 model years a Maxima station wagon was available, but following '88 the Maxima's exterior was ‘tightened up' and listed as a compact sedan. The square exterior was smoothed into a sleeker more sinewy design for the 1989 model year. The Maxima also grew a few inches and re-established itself as a mid-size sedan in America. The vehicle sported a unique feature; a phonograph-based voice warning system that alerted the driver when a door was opened; etc and was relayed through the mini phonograph and played for the driver to hear. The 1981 models were the first ever ‘talking car' sold in the U.S. and at the time only offered one warning; ‘Please turn off the lights' in a female voice.

During the fall of 1984 the first ever front-wheel drive Maxima was introduced, available with a 154 hp 3.0 L VG30E V6 engine and either a 4-speed automatic or 5-speed manual transmission.. This was the same engine in the naturally aspirated 300ZX and the Japanese market Nissan Gloria/Nissan Cedric, and the initial V6 engine to be mass produced in Japan. The final year for the station wagon was 1988 which had been available since the Datsun 810 days, and the second generation was assigned the compact status. The 1987 Maxima was debuted in late 1986 with a freshened exterior and interior that included automatic shoulder-belts on both wagons and sedans built after February 1987. Trim levels were renamed GXE and SE, and featured digital touch entry system on the driver and passenger side door panel, power windows, locks, seats, remote trunk release, voice warning side, an optional Electronic package and an optional power sunroof. Standard on the Maxima were 15' alloy wheels and an exclusive option for '88 was the Sonar Suspension System that replaced the trip computer that was offered previously. Utilizing sonar waves to monitor the road conditions ahead and adjust the shocks accordingly this system ensured the most controlled ride. 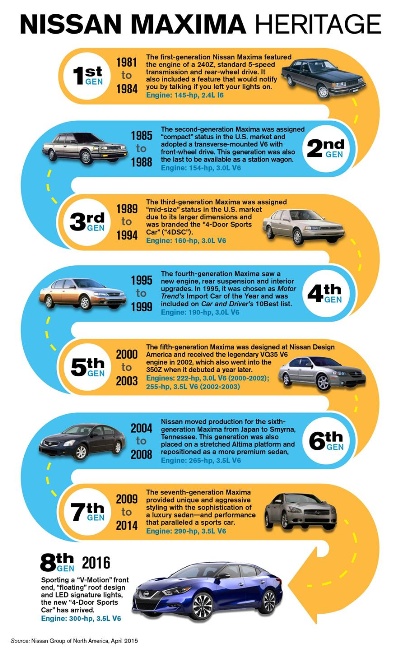 MAXIMA HERITAGE: A LOOK BACK AT SEVEN GENERATIONS OF 4-DOOR SPORTS CARS

NEW YORK – The 2016 Maxima is the 8th generation of Nissans iconic 4-Door Sports Car (or 4DSC) – though the term wasnt coined until the 3rd generation 1989 model. The very first model to wear the Maxima name had an 8 in its name – the 1981...
© 1998-2020. All rights reserved. The material may not be published, broadcast, rewritten, or redistributed.