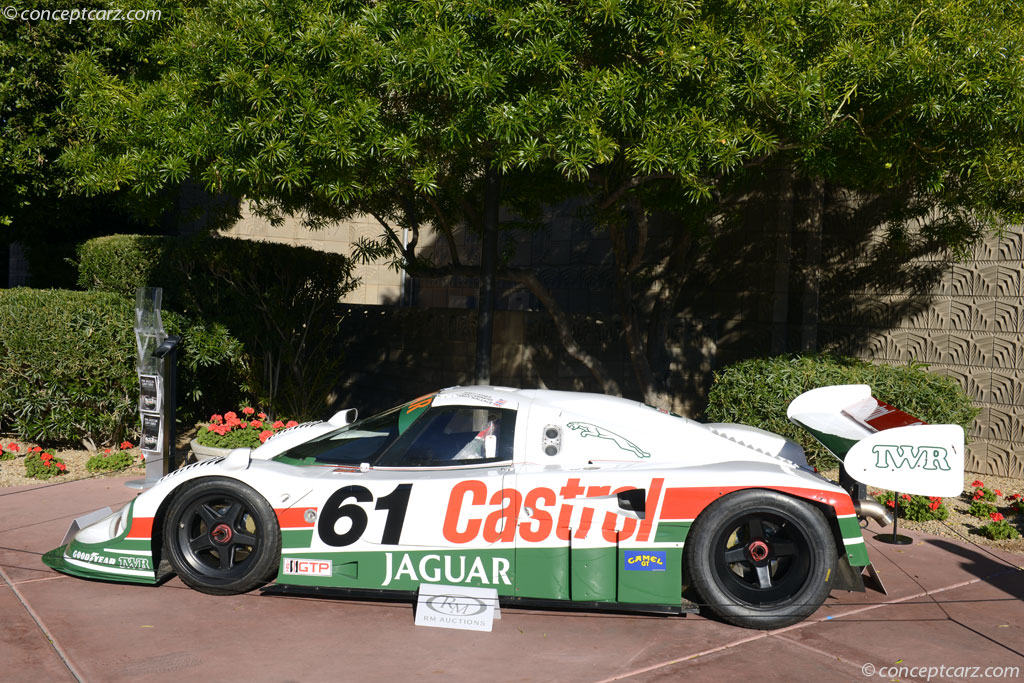 From 1984 through 1993, Jaguar backed teams in both the World Sportscar Championship Group C and the IMSA Camel GTP competition with their Jaguar XJR Sportscar. The history of the project dates back to the early 1980s with Bob Tullius. He formed the Group 44 racing team in the early 1960s with partner Brian Feurstenau and campaigned his Jaguar E-Types for the following two decades. He also played a part with the Howmet gas turbine-engined LeMans car of 1968, which he drove in the 24-Hour race.

The Jaguar XJR-5 was designed primarily for competition in the IMSA's GTP class. Tullius was able to persuade Mike Dale of Jaguar Cars Inc. in New Jersey to fund this project. Designer Lee Dykstra was tasked with creating a car that could accept a Jaguar V12 racing engine. Group 44's previous four cars were the XJR 1 through 4. This new prototype racer was called the Jaguar XJR-5.

Dykstra used the twelve-cylinder engine as a stressed member of the chassis and bolted it directly to the aluminum monocoque. Four stiffening struts were bolted to the racer's firewall and the rear suspension completed the ensemble. The monocoque chassis had honeycomb floor sections and tubular-reinforced steel bulkheads. Underneath the car was reserved for aerodynamics, of which Dykstra was an expert at designing and incorporating. Venturi tunnels extended from the flat-bottomed cockpit to the rear and exited beneath the full-width rear wing. The body was constructed of carbon fiber and Kevlar composite.

Aerodynamics and ground effects had gained in popularity. Lotus was one of the first to prove the benefits of ground effects and reducing the air pressure under the car. Low air-pressure was used to keep the car planted firmly on the track. The resulting design of the JXR-5 was put through tremendous testing in the Williams wind tunnel. After fine-tuning the design, two cars were produced. The first was a car that was intended for high speeds track and had low drag and low downforce. The second car had high downforce and aimed at slower tracks. Testing at Summit Point began as early as June of 1982. A few months later, the car made its racing debut at Road America and was driven by Bob Tullius and Bill Adams. Two Porsche 935's secured the first two positions, but the XJR-5 manage to crack the top three and a class win the GTP class. The following races were not as fruitful for the car. Its first race victory came the following year, at the Road Atlanta 500km race. The car continued to compete but was never a major contender for the championship.

Dykstra had continued the development of the XJR Sport Cars design. By 1985, a completely new car had been drawn. The 5.3-liter engine had grown in 1984 to a full six-liters and the twelve-cylinder engine was now using Lucas/Micos engine management systems.

Derek Bell tested one of the Group 44 team's XJR-5 cars at Silverstone in 1983. Bell was pleased with the car and excited for its potential. This report stimulated Jaguar to back the Group 44's effort in competing at the LeMans 24 Hour endurance race. It had been twenty-two years since Jaguar competed at LeMans. Lancia and Porsche were too fast; the two Jaguar XJR 5s ran for fourteen hours before retiring from the race. They had been sitting in sixth and seventh positions. The cars would return to LeMans, but a 13th overall and a win the GTP Category would be their best showing. 1985 would be Tullius's final racing appearance at LeMans.

Factory funding later switched to Tom Walkinshaw's TWR cars. The XJR-6 shared a similar engine with the XJR-5, but little else. Tony Southgate had been tasked with creating the design. He used a carbon fibre monocoque and plenty of ground effect tunnels and aerodynamics. TWR worked closely with Zytek to form a new fuel injection system for the V12 engine and allowed them to extract as much horsepower as possible while retaining as much fuel economy as possible. Group C had fuel restrictions that all teams had to abide by. The result of the work on the engine was a 6.5-liter unit in a naturally aspirated form that was capable of producing 650 horsepower.

Three cars were constructed in 1985 and made their racing debut the following year. Their immediate Achilles' heal was their weight, which caused the engine to work harder and decreased fuel efficiency. The teams had no recourse except to run the engines at lower horsepower to increase fuel efficiency and to satisfy fuel economy regulations. Three more cars were created and scored a victory at the Silverstone 1000 km race. At LeMans, the cars failed to finish and the glory days of Jaguar racing were still allusive.

Further development of the racers, with over sixty changes being made, resulted in the XJR-8. The car competing in Group 44's IMSA GTP Competition had used the XJR-7 naming scheme.

The Jaguar XJR-8 was powered by a seven-liter engine that had a maximum horsepower rating of 720. This massive boost in power was what the team needed to win eight of the ten races in the World Championship. Development continued for suitable LeMans cars, which could take advantage of the high-speed track. The cars featured low drag bodies, but it would not be enough for Jaguar to clinch a victory at LeMans. One of the XJR-8 was poised for a positive finish, but a gearbox problem changed its fortunes. Porsche went on to win the race and their fifth straight LeMans victory.

The next iteration of the TWR racer was the XJR-9, which was intended for IMSA GTP competition in 1988. The Group 44 efforts had begun to fade near the close of 1987, and TWR stepped in to boost their efforts. The XJR-9 was a mildly revised version of its predecessors and continued the winning tradition, and dominated the World Championship.

For LeMans, Jaguar played the odds by fielding five cars. One of the cars ran eight hours before a transmission problem sidelined it prematurely. A second car had a head gasket fail in the eleventh hour and it joined the first car. The three remaining cars were able to complete the race. Jan Lammers drove one of the Jaguar entries and was nearly sidelined by transmission issues. The problem was spotted in time, resulting in Lammers not able to shift and had to remain in fourth gear. The car limped along, still with a two minute lead over a Porsche, and secured Jaguars long-sought goal to re-capture a victory at LeMans. Had Lammers shifted, his car would have suffered the same fate as the first car.

For 1989, TWR developed two near cars, the XJR-10 and the XJR-11 for IMSA and Group C competition. The XJR-10 was intended for the IMSA, while the XJR-11 was developed for Group C. These cars differed greatly from their predecessors, as they were powered by turbocharged V6 engines. Displacement size was 3- and 3.5-liters. Both cars did not enjoy the same success as the XJR-9, though some success was had. The V6 engine was not as durable as the twelve-cylinder unit, and later the six was replaced with the twelve. The resulting car was dubbed the XJR-12. At LeMans, the car scored another victory for Jaguar. Rules changes persuaded Jaguar to withdrawal from the competition.

The TWR Jaguar team had been crowned World Champion in 1987 and had won LeMans victories in 1988 and 1990. They had enjoyed much success. When it came time to create their next generation of Group C cars, TWR decided to begin with a new design. The project was led by Ross Brawn, whose resume included over a decade in various roles in Formula 1. Brawn had never designed a sports car before, but his knowledge of Formula 1 rules and technology made him a suitable candidate for the job, as the new sports car was essentially an F1 car with a sports car body.

The new car was called the XJR-14 and work began near the close of 1989. The design called for a carbon-fiber tub, ground-effect tunnels, and a short and narrow front section. The suspension was comprised of transverse torsion bars that were mounted to the pedal box due to size constraints. The rear featured more conventional coil springs actuated by push-rods. Power was from Ford's Cosworth narrow V8 F1 engine.

The lightweight body had no doors. Instead, the driver accessed the cockpit through the removable side window. Inside, the driver configuration consisted of right-hand drive with a centrally mounted gear lever. Thus, the driver had to shift with their left hand.

A total of three XJR-14 Sports Cars were built and two were completed in time for the first event of the championship. The only other Group C car on the grid at Suzuka was the Peugeot 905. The Peugeot had its first race late in 1990, so it had time for refinement and testing. It also had a larger V10 engine. The Jaguar, however, had state-of-the-art aerodynamics and technology which helped it qualify on pole position for the Suzuka season opener race. That car had been driven by Derek Warwick and Martin Brundle. During the race, the Jaguar was on its way to win until a problem with the starter forced them to give up the lead.

The second round was at Monza where two Jaguar entries qualified and finished in first and second place. They repeated their victory at Silverstone and the Nürburgring.

For the LeMans race, Jaguar decided to use their V-12 engine which they felt was more reliable and better suited for the 24-hour event. The three cars entered finished 2nd, 3rd, and 4th.

Mid-way through the season, the Peugeots had become more competitive, but not enough to clinch the World Team and Driver Championships away from Jaguar and driver Teo Fabi.

For the 1992 season, Jaguar withdrew from Group C competition due to cost, leaving Peugeot, Toyota, and Mazda to fill the grid. Instead, the turned their attention to the IMSA GTP Championship. For this series, the XJR-14s were repainted to 'Bud Light' colors and updated to comply with racing regulations. For the longer distance races, Jaguar used the XJR-12s. For round 2 of the Championship, Davy Jones qualified the XJR-14 on pole position but was unable to finish the race due to spinning out late in the race. In the fourth round, he qualified on pole and was able to win the race. At Lime Rock, a mechanical failure caused the car to crash. At Mid-Ohio, another victory was earned. The next seven races were won by Juan Manuel Fangio II and the Toyota-Eagle Mk III. Jones would end the season in second place in the Drivers' Championship while Jaguar was fourth in the Manufacturer's Championship.

In prototype sportscar racing, the 1980s virtually belonged to Porsche. However, Tom Walkinshaw had designs to bring a famous marque back to the forefront and challenge the Teutonic dominance. The late 1980s would usher in the era of the 'Big Cats'.<....[continue reading]

DAYTONA BEACH, Fla. (Jan. 26, 2017) – Chip Ganassi, a former race-car driver who is now one of the most successful and innovative race team owners in the world, was honored by the Road Racing Drivers Club with the 2017 Phil Hill Award. RRDC president... 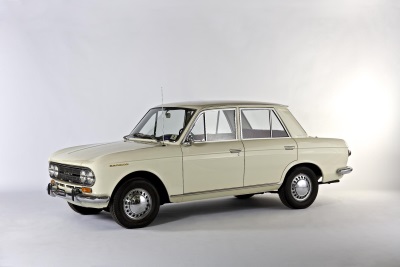